"A Swan And Cygnets, Nothing More"

The arrival of the New Year leads inevitably to thoughts of Time -- "implacable fate" and "the strumble of the hungry river of death" as Hilaire Belloc says in "From the Latin (but not so pagan)."  But that is too bleak a way to begin anew, isn't it?

Perhaps it is best to stick with the present, with moments.  Ludwig Wittgenstein, in his mystical and puzzling way, says this:

If we take eternity to mean not infinite temporal duration but timelessness, then eternal life belongs to those who live in the present.

Tractatus Logico-Philosophicus, Proposition 6.4311 (1921) (translated by D. F. Pears and B. F. McGuinness).  A bit on the abstract side, I'm afraid.  Better to think in terms of, say, swans swimming on a tree-lined river on a summer's day.

A swan and cygnets, nothing more.
Background of silver, reedy shore,
Dim shapes of rounded trees, the high
Effulgence of a summer sky.

Only a snap-shot.  Just a flash,
And it was fixed, -- the mimic wash,
The parent bird on-oaring slow,
Her fussy little fleet in tow,
The all-pervading sultry haze,
The white lights on the waterways, --
A scene that never was before,
A scene that will be -- Nevermore!

Alas! for us.  We look and wait,
And labour but to imitate;
Vainly for new effects we seek . . .
Earth's shortest second is unique! 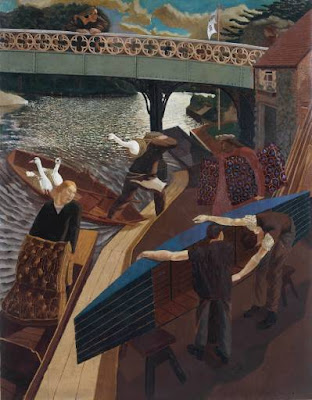 A good poem, but I wonder whether he should have cut the last four lines?

Happy New Year, Tim! Thank you for stopping by again.

Excellent point on the last four lines of the poem. Although I am fond of Victorian poetry, and although I think that it is sometimes unfairly neglected, some of the generalizations about the Victorian temperament (or, at least, part of it) are correct -- for example, a tendency to seek to arrive at some sort of moral or lesson in order to round things off. The last stanza seems to fall within that category, doesn't it?

Your point also reminds me of something that Kingsley Amis wrote about a poem of Housman's: "it is possible to say more in an indirect way than directly." "The Amis Anthology", page 331.

As always, thank you, Tim.