"A Rabbit As King Of The Ghosts"

In recognition of the upcoming Year of the Rabbit, here is a poem by Wallace Stevens.

A Rabbit as King of the Ghosts

The difficulty to think at the end of day,
When the shapeless shadow covers the sun
And nothing is left except light on your fur --

There was the cat slopping its milk all day,
Fat cat, red tongue, green mind, white milk
And August the most peaceful month.

To be, in the grass, in the peacefullest time,
Without that monument of cat,
The cat forgotten in the moon;

And to feel that the light is a rabbit-light,
In which everything is meant for you
And nothing need be explained;

Then there is nothing to think of.  It comes of itself;
And east rushes west and west rushes down,
No matter.  The grass is full

And full of yourself.  The trees around are for you,
The whole of the wideness of night is for you,
A self that touches all edges,

You become a self that fills the four corners of night.
The red cat hides away in the fur-light
And there you are humped high, humped up, 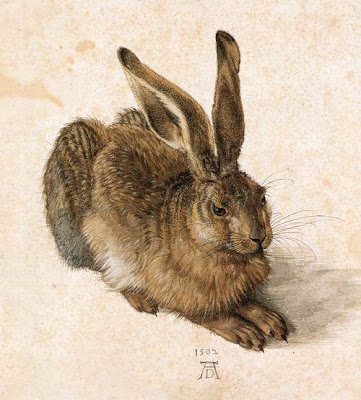 As is often the case with Stevens, the question arises:  "But what does it mean?"  How about this:  the cat is the World, or everyday reality;  the rabbit is us;  the cat is ever-present, but the rabbit has its own meditative, imaginative "rabbit-light" that can transform and transcend (temporarily, alas) the cat World.  But to think of the cat as "a bug in the grass" -- however briefly -- is no small thing:  "King of the Ghosts."

Well, that's more than enough of that nonsense!  Here is what the poem may just as likely be about:

One side of my bed there is nothing but windows; when I lie in bed I can see nothing but trees.  But there has been a rabbit digging out bulbs:  instead of lying in bed in the mornings listening to everything that is going on, I spend the time worrying about the rabbit and wondering what particular thing he is having for breakfast.

Please disregard what I wrote previously about the "meaning" of the poem.  The poem is about a rabbit in Wallace Stevens's garden in Hartford, Connecticut in the late spring of 1937.
Posted by Stephen Pentz at 12:15 AM

Ahhhhh! A great read accompanied by a superb picture. I love Durer's Hare and owl images, such detail and presented without sentiment. Thank you for reminding me of this!

Murgatroyd: Happy New Year! Thank you for visiting again, and for your kind words.

Yes, Durer is wonderful, isn't he? Have you seen the beautiful book titled "Nature's Artist: Plants and Animals by Albrecht Durer" by Victoria Salley? I believe that it includes most of his animal and plant drawings and paintings.

As always, thank you for stopping by, Murgatroyd.