"No Possum, No Sop, No Taters"

Now, "in the bleak mid-winter" (to borrow from a Christmas poem by Christina Rossetti), let us once more turn to that poet of winter, Wallace Stevens, and to a poem of his set in "deep January."

No Possum, No Sop, No Taters

He is not here, the old sun,
As absent as if we were asleep.

The field is frozen.  The leaves are dry.
Bad is final in this light.

In this bleak air the broken stalks
Have arms without hands.  They have trunks

Without legs or, for that, without heads.
They have heads in which a captive cry

Is merely the moving of a tongue.
Snow sparkles like eyesight falling to earth,

Like seeing fallen brightly away.
The leaves hop, scraping on the ground.

It is deep January.  The sky is hard.
The stalks are firmly rooted in ice.

It is in this solitude, a syllable,
Out of these gawky flitterings,

It is here, in this bad, that we reach
The last purity of the knowledge of good.

The crow looks rusty as he rises up.
Bright is the malice in his eye . . .

One joins him there for company,
But at a distance, in another tree.

For many years, Stevens vacationed in Florida in order to escape the New England winters.  In January of 1940, he wrote to a friend who lived in the South:  "How happy you all seem to be down there; how you go on living in a land of milk and honey, or, to be more exact, possum, sop, and taters."  Peter Brazeau, Parts of a World: Wallace Stevens Remembered (1983), page 109. 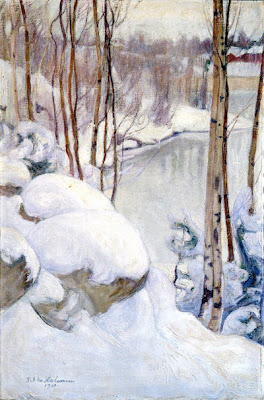 That poem is very beautiful. What does 'possum' mean in the US - is it a nocturnal animal, like the one we are familiar with here, (strangely human hands, odd growling noises, tendency to come down your chimney at the most unexpected moments)?

This is a lovely blog - I'm glad to have found it

Yes, our possum is the critter that you describe. Although I love the South, I am in no hurry to sample one of its local delicacies: possum stew (with or without sop and/or taters). Good old Southern barbeque (of many state-by-state varieties) is an entirely different matter, of course.

As always, thank you for dropping in.

frances thomas: Thank you very much for your kind words. I am delighted that you found your way here. Welcome.