"The Climate Of Thought": Robert Graves

I suspect that Robert Graves is best known, not for his poetry, but for Good-Bye to All That (his memoir of the First World War), The White Goddess (a mythological/anthropological/philosophical work), and his historical fiction (I, Claudius, et cetera).  Which, as they say, is a pity, since his poetry is very good.

Given the hundreds of poems that he wrote over a writing life of 70-odd years, it would be misleading to suggest that a particular poem is "typical" of Graves.  Thus, I offer the following poem because I like it, and because the title reminds me of the title of a poem by Wallace Stevens (who I have had on the brain for a couple of months): "The Poems of Our Climate."  (I am not suggesting that there is any literary link between the two poems.  I am only explaining my arbitrary choice.)

The Climate of Thought

The climate of thought has seldom been described.
It is no terror of Caucasian frost,
Nor yet that brooding Hindu heat
For which a loin-rag and a dish of rice
Suffice until the pestilent monsoon.
But, without winter, blood would run too thin;
Or, without summer, fires would burn too long.
In thought the seasons run concurrently.

Thought has a sea to gaze, not voyage, on;
And hills, to rough the edge of the bland sky,
Not to be climbed in search of blander prospect;
Few birds, sufficient for such caterpillars
As are not fated to turn butterflies;
Few butterflies, sufficient for such flowers
As are the luxury of a full orchard;
Wind, sometimes, in the evening chimneys; rain
On the early morning roof, on sleepy sight;
Snow streaked upon the hilltop, feeding
The fond brook at the valley-head
That greens the valley and that parts the lips;
The sun, simple, like a country neighbour;
The moon, grand, not fanciful with clouds. 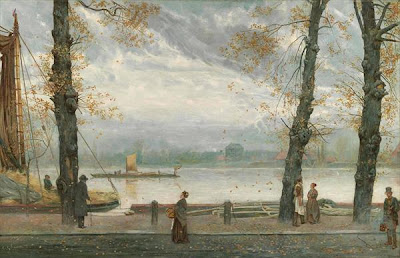 Cheyne walk, isn't that where Rossetti walked his wombat? Mmm, must be a subtle poetical allusion...

Anonymous asked D.G. Myers: "Can someone recommend alternatives to The Elements of Style?"

"Absolutely. Robert Graves and Alan Hodge’s Reader Over Your Shoulder (1943) is the book I depend on. The authors include specimen texts, which illustrate the stylistic blemishes they are criticizing. Much less dogmatic than Strunk and White as a consequence."

Robert Graves' poem "The Reader Over My Shoulder" can be found here:

pomposa: I confess that Rossetti strolling with his wombat on Cheyne Walk is something new to me. Thus, there was no 'subtle poetical allusion' up my sleeve, I'm afraid. (I am not that clever!)

However, I have since educated myself via the wonders of the Internet -- I hadn't realized what a cause celebre Rossetti and his wombats were.

As always, it is a pleasure to have you stop by.

Mr. Lull: Thank you very much for the links to Mr. Myers's post and to Graves's poem -- which I hadn't read before. I appreciate your thoughtfulness. Thank you for visiting again.