Like Arthur Symons, Victor Plarr (1863-1929) was a poet of the Nineties -- one of his friends was Ernest Dowson (of "they are not long, the days of wine and roses" fame).  However, he left the life of absinthe behind to become the librarian for the Royal College of Surgeons.  The following Explanation of Life displays a bit of the gloomy, romantic fatalism of the Nineties, but there is something about the poem that the lovable pessimists Philip Larkin and Thomas Hardy might find to their liking.  For instance, "as you lie and die" sounds like vintage Larkin.  And "old gray Death upon his crutch" carrying his "Bag of Nought" would be quite at home in a poem by Hardy.

On Change of Opinions

As you advance in years you long
For what you scorned when but a boy:
Then 'twas the town, now the birds' song
Is your obsession and your joy.

And, as you lie and die, maybe
You will look back, unreconciled
To that dark hour, and clearly see
Yourself a little wistful child.

Into the jaws of death you'll bring
No virile triumph, wrought with pain;
But only to the monster fling
The daydream and the daisy-chain,

The lisped word, the gentle touch,
The wonder, and the mystic thought,
For old gray Death upon his crutch
To rake into his Bag of Nought.

Victor Plarr, The Garland of New Poetry by Various Writers (1899). 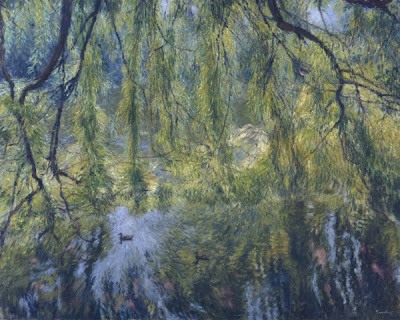 Christopher Sanders
"Sunlight Through a Willow Tree at Kew" (1958)
Posted by Stephen Pentz at 12:10 AM

'the lisped words' is a little winsome for me.

zmkc: I agree -- the phrase struck me the wrong way as well when I first read the poem. "Winsome" is a perfect description! (And one which applies to a great deal of bad Victorian poetry.)