John Ford's My Darling Clementine was released in 1946.  It tells the story of Wyatt Earp and the gunfight at the O.K. Corral.  By "modern" standards, Ford is old-fashioned, unsophisticated, and (of course) politically incorrect.  He preferred to film his movies in black-and-white rather than in color.  He regretted the demise of silent movies, because he liked to tell his stories with images, not words.

Wordsworth, Hardy, Yeats, Frost, and Stevens each wrote hundreds of poems.  Of the two or three thousand poems that the five of them wrote, a few score achieved something approaching perfection of feeling, thought, and form -- in other words, beauty.  In the same way, of the hundreds of scenes that John Ford directed, a few score achieved beauty as well.  As it happens, that beauty often has quite a bit to do with the U.S.A.

In the following scene from My Darling Clementine, nothing happens.  It is Sunday morning.  Wyatt Earp (Henry Fonda) leans back in a chair on the porch of a hotel in Tombstone.  The townsfolk are heading to the church-meeting up the street.  The church has not yet been built:  only the frame of a bell tower and two flagpoles with flapping American flags stand against the sky. 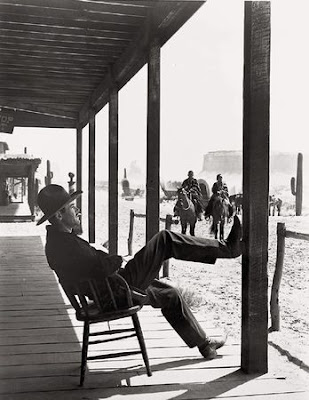 Chihuahua (Linda Darnell) arrives.  Henry Fonda leans his chair further back, holds out his arms, and places one foot, then the other, on the post, lightly bouncing up and down.  No words are spoken.  Chihuahua walks into the hotel to meet Doc Holliday. 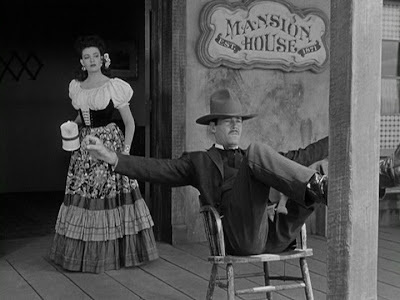 An aside:  this scene demonstrates that, as far back as 1946, Henry Fonda was way cooler than Marlon Brando, James Dean, Paul Newman, and Steve McQueen (and any actor after them) ever were. 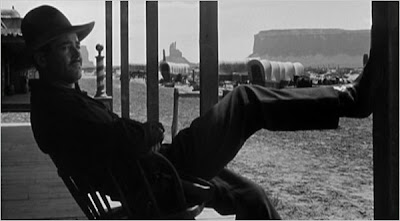 Monument Valley, Arizona -- one of John Ford's favorite locales --lies in the distance.  (Monument Valley is actually about 400 miles away from the real Tombstone.)  Wyatt is likely thinking about Clementine Carter.  "I sure like that name . . . Clementine" is the final line of the movie.  Vanished America.
Posted by Stephen Pentz at 12:15 AM

I saw this movie as a boy when it was first released. I loved it and called it the best western (until Shane). I remember the scene you show. I was taken with it, but I wasn't as introspective then. Your association with cool and modern actors & ideas is beautiful to ponder. Thank you for a lovely post.

Lincoln Hunter: Thank you for visiting and commenting again, and for your very kind words.

The whole movie is beautiful to watch, but for some reason that particular scene has always stayed with me. (Although the scene a few minutes later when Wyatt dances with Clementine beneath the Arizona sky at the church dance is a close second.)

Mr Pentz: I liked your commments on this tiny scene and would welcome more. Please consider extending your blog's range of reference for the future delectation of your readers. God knows, there must be more pretentious bilge uttered in the name of film criticism that anything else under the sun.

PAL: Happy New Year, and thank you for stopping by again!

Thank you as well for your kind words, but I seriously thought about deep-sixing the "Clementine" post because I felt that it crossed the over-the-top line in terms of pretentiousness -- i.e., I could feel myself getting carried away.

I appreciate your suggestion about re-visiting this area, but I fear that I may afflict you with a post on "The Relevance of Southern California Culture in the 1970s on the Ontology of 'The Big Lebowski'" or some such thing! Yet, there are a few memories that come to mind.

As ever, it is a pleasure to hear from you, PAL.

Mr Pentz: I don't think you'd be wandering all that far from home ground. The Henry Fonda bit you comment on so wittily is surely just another kind of poetry - visual, cinematic - possessed of poetry's essence, much said in little? I agree with you about flirting with film-study pseudery - I detected not a whiff of it in your piece, incidentally - but in a sense you reinforce my point; surely it's the disastrous consequence of the academy processing popular culture into a "discipline", as it's turned lit crit into gobbledegook.

The "common reader" has been revived by the Net in blogs like yours, Kurp's and many others. I don't much care for Gore Vidal, but he put a point rather well when taxed with taking on the script for The Left-Handed Gun (another western I rather like): "Shit had its own integrity". Surely a popular form like the cinema needs the characteristic discrimination of the common movie-goer, just as literature always needs that of the common reader - someone who's neither a 3rd-rate academic nor hormone-fuelled and pimply? I rest my case.

I've always thought that the Jennings/Adcock generation capable of stuff superior to a lot of the better-known blokes who were their contemporaries.

All the best for the new year.

PAL: I always appreciate your perspective on things -- your points are well taken.

I especially appreciate your comments on the "common reader" and the "common movie-goer." I agree that the so-called "specialists" have sought to take over the field -- to the detriment of the simple enjoyment and appreciation of good things. My part is tiny, but I am flattered by your comment about the role of blogs like this in reviving the idea of the "common reader." I hope that what I do has that effect.

As ever, thank you, PAL.