Life Explained, Part Twelve: "This Being Baffled Is Itself The Thing"

I came across the following sonnet by Joseph Treasure in the December 19, 1997, issue of The Times Literary Supplement.  I have not been able to find any other poems by Joseph Treasure.  Is the name perhaps a pseudonym?  At any rate, the poem is a fine one.  It has a bit of a Larkin atmosphere, I think.

Somewhere I was to go, where I could stand
Steadily on the earth and breathe the air.
And so I've bundled up my courage, and
Felt somewhere else the urge to be elsewhere.

Someone I was to meet who'd make things clear.
But though I've found comfort in company,
Answers I haven't found, and what I fear
Is having no-one left to ask but me.

Something I had to learn, but cannot guess
Now what it was.  Yearly more baffling
I find this place, yearly more ill-defined

Truth and untruth, so nothing's done.  Unless
This being baffled is itself the thing,
And minding just the habit of the mind. 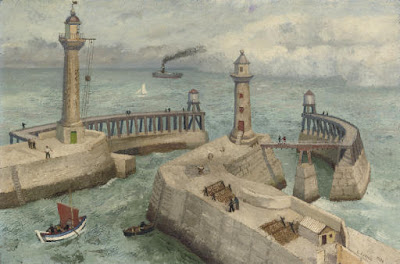 Here's part of a poem from a Google Books snippet view of volume 70 of Encounter:

... catch breath balancing brittle nerves Precariously to drain beside the sink. No estranged wife, no disaffected lover, No woman wanting more than she deserves, No cause, no words to tell me what to think. Joseph Treasure ...

Mr. Lull: Thank you very much for the research and for the link! I will try to track down a copy of that issue of Encounter. Thanks again.

I always enjoy the finding of lost poems.

Thank you very much for stopping by again, Shelley. I'm pleased that you liked the poem.

Good to hear from you again, zmkc. Yes, it is lovely, isn't it? As always, thank you for the comment.

The poem by Joseph Treasure in Encounter that I mention above is titled “Ruth” and can be found here:

Finding you in your kitchen caught in still
Warm light, head held uneasily alert,
Hair smudged with wild flowers on the window-sill,
Face shadowed, drawn, expecting to be hurt,

I hesitate—for once silence seems better—
And lose, like anger slipping from the hand,
The din of closing rank and lawyer's letter,
Aware of what I see, not where I stand.

Faltering, I am able to discover,
While you catch breath balancing brittle nerves
Precariously to drain beside the sink.
No estranged wife, no disaffected lover,
No woman wanting more than she deserves,
No cause, no words to tell me what to think.

Mr. Lull: Wow! I can't believe you remembered this after so many years! It's very thoughtful of you to share this. Thank you.

Another lovely poem. I wish he had written more. You have no doubt already discovered this, but he went on to write novels: two published and one about to be published. He has a website and blog under the name "Joe Treasure."

I am of a mind to send him an email to thank him for his poems, and ask what else has published.

I hope you are enjoying your retirement. Every couple of years, I pass through your neck of the woods. I am a Minnesota native, and I return to visit my two aunts and an uncle. Each time I come back, we spend a fews days on Lake Superior at Cove Point Lodge in Beaver Bay.

Thank you again for this, and for all the other items you have shared with me over the years.

Mr Pentz: I hope you do e-mail Mr Treasure and that he won't mind your sharing his response with your blog readers.

Apparently he thought of himself for a while as a poet: in 2001 he wrote a review for the Los Angeles Times that was accompanied by this note: “Joe Treasure, a poet, is an occasional contributor to the Times Literary Supplement (London).”

Thanks, I am enjoying retirement.

A local poet, Connie Wanek, who was a colleague of mine at the Duluth Public Library, wrote this about the North Shore (I wonder whether it might resonate some with you):

A cabin so small it is like a woodpecker hole
smelling of fresh pine pitch.
Like a new-made pauper’s coffin.
Calm today. One feels the depth of the lake,
the weight of an iron anchor
falling through the fathoms.
Here or there a surface disturbance,
a boat wake, a few gulls bickering over fish offal,
then a random gust from the north.
The lake wrinkles the way a horse,
dozing in the shade, jerks its skin
where a fly lands.
Waves come to shore backwards, blindly,
like a horse backing into wagon traces
with a sack over its head.
If a horse knew its strength
it could never be tamed.

Mr. Lull: Thank you for the follow-up thoughts. I will let you know if I contact him, and, if I find out where other poems of his are located, I will provide you with the information.

Thank you very much for the poem by Ms. Wanek: it captures very well the feel of Lake Superior. The opening two lines bring me back to childhood days spent in small cabins at various lake resorts "Up North" (as, I'm sure you know, Minnesotans call it).

Thank you again for the information, and, especially, for your long-time presence at this blog.