On my walks this past week, I have noticed crocuses surfacing.  And deep-red leaf-buds have begun to appear on the lilac bushes in the yard.  Or is it a false spring?

I wonder, have I lived a skeleton's life,
As a questioner about reality,

A countryman of all the bones in the world?
Now, here, the warmth I had forgotten becomes

Part of the major reality, part of
An appreciation of a reality;

And thus an elevation, as if I lived
With something I could touch, touch every way.

Stevens wrote "First Warmth" in 1947 -- his 68th year.  As I have noted previously, Stevens's late poetry (from the mid-1940s until his death in 1955) is more direct and more emotional than his earlier poetry.  (Which is not to say that he completely abandoned his often-difficult abstractions and his verbal flights -- I am not suggesting that he began to sound like Robert Frost.)

As I became acquainted with Stevens's poetry, there were times when I felt that his abstractions and his verbal "prinking" (to use a word of his) were too much for me.  But then I worked my way into his late poems.  "First Warmth" may have been a turning point for me:  the lines "I wonder, have I lived a skeleton's life,/As a questioner about reality,/A countryman of all the bones in the world?" showed me a side of Stevens that I hadn't seen (or perhaps hadn't noticed) before.  "The warmth I had forgotten" (with its prefatory "now, here") told me that he recognized that he may have been missing something all along.  (On the other hand, notice the "as if" in line 7  --  he doesn't give in completely, does he?  What's more, he later revised the poem and retitled it "As You Leave the Room."  I will save that for another time.)

But that is enough palaver.  "First Warmth" is a poem about spring.  False or otherwise. 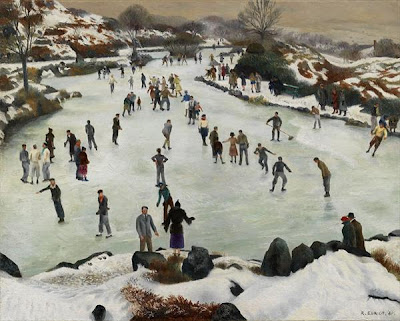 Of course Frost, my major influence, seems more accessible than Stevens on a first reading, but as I'm sure you know, Frost is every bit as puzzling and mysterious as Stevens can be.

Lovely poem though, that "touch every way."

Shelley: thank you for stopping by again. I'm glad that you liked the poem. As to Frost versus Stevens, I was thinking of the surface, not the depths. I agree with what you say.