I have previously suggested that James Reeves is a Neglected Poet who deserves to be better known.  I am fond of the following poem by him.  In it, nothing seems to happen.  On the other hand, the never-ending journey seems somehow portentous -- in a small modern way.  Like Dante in an industrial park.

It was impossible to leave the town.
Bumping across a maze of obsolete rails
Three times we reached the gasworks and reversed.
We could not get away from the canal;
Dead cats, dead hopes, in those grey deeps immersed,
Over our efforts breathed a spectral prayer.
The cattle-market and the gospel-hall
Returned like fictions of our own despair,
And like Hesperides the suburbs seemed,
Shining far off towards the guiltless fields.
We finished in a little cul-de-sac
Where on the pavement sat a ragged girl
Mourning beside a jug-and-bottle entrance.
Once more we turned the car and started back.

James Reeves, The Password (1952).  An aside: depending upon the strictness of one's definition, the poem may qualify as a sonnet.  A second aside: for more on the Hesperides, you may wish to check here. 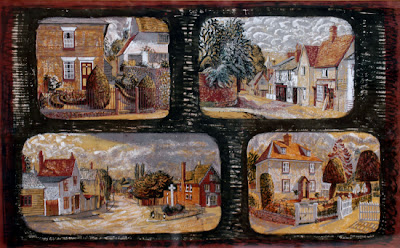 The title of the poem reminds me of my favourite passage in Edward Thomas - part of a more successful attempt to leave the town behind. The first part of 'The Heart of England' is titled 'Leaving Town'. As Thomas leaves an inn, en route out of town, he writes:

'I felt a kind of exalted and almost cheerful gloom as I stepped out and saw that it was raining and would go on raining. O exultation of the sorrowing heart when nature also seems to be sorrowing! What strange merriment is this which the dejected mind and the wind in the trees are making together! What high lavolt of the shuffling heels of despair! As two lovers wounded and derided will make of their complainings one true joy that triumphs, so will the concealing rain and the painful mind.'

This is my desert island book, which contains as much poetry as his true poetry does. It is available online at http://openlibrary.org/.

I like that very much, except for the second last line, which somehow jars (no pun re jugs intended). Do you notice that, or is it just me being irrational?

I love the simile, "like fictions of our own despair" as well as yours, "Like Dante in an industrial park." Lovely artwork also.

Mr Lancaster: thank you very much for visiting again. And thank you as well for the link to Edward Thomas's 'Leaving Town.' I agree about the poetic quality of Thomas's prose -- I sometimes get a bit irked when I see his prose referred to as 'hack' work or 'Grub Street' work, which is often seen in criticism of his work. I, like you, believe that his prose is valuable in itself.

That being said, I can't help but remark -- and I am certain that you have noticed this as well -- the passage that you quote is quite reminiscent of his poems 'Rain' and 'It Rains.' The Thomas melancholy, I suppose. (Although I would not want to over-stress his melancholy -- there is more to him than that).

As always, thank you for your thoughtful comments.

On another note: thank you for all of your work in building and updating the Ivor Gurney website. I urge any interested readers to visit the site, which is wonderful. A link to Mr Lancaster's site is included in my list of blogs, and from his site, you may reach the Gurney site.

zmkc: Do you find the sound jarring, or the sense? (Or both?) I confess that, as an American, I didn't know what a 'jug-and-bottle' was when I first read the poem -- although I surmised that it was a liquor store or bar of some sort. At the time of my first reading, the Internet didn't exist, so I made my way to a library to track the phrase town. I discovered that a 'jug-and-bottle' is (correct me if I am wrong) a separate part of a pub where one can buy spirits for consumption off-site.

Having said all that, is there perhaps some other connotation to 'jug-and-bottle' that this colonial has missed?

From My Easy Chair: as always, thank you for dropping by, and for the kind words. Yes, 'fictions of our own despair' is a lovely phrase, isn't it?