"An Ideogram On Sea-Cloud": Derek Mahon

The lines "Television aerials, Chinese characters/In the lower sky" from Douglas Dunn's "On Roofs of Terry Street" put me in mind of a reference to a Chinese character in one of my favorite Derek Mahon poems.  As I have mentioned before, Mahon is a wonderful poet of sea-coasts and sea-side towns, and this is one of those poems.

Before the first visitor comes the spring
Softening the sharp air of the coast
In time for the first 'invasion'.
Today the place is as it might have been,
Gentle and almost hospitable.  A girl
Strides past the Northern Counties Hotel,
Light-footed, swinging a book-bag,
And the doors that were shut all winter
Against the north wind and the sea mist
Lie open to the street, where one
By one the gulls go window-shopping
And an old wolfhound dozes in the sun. 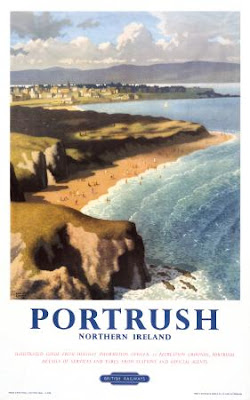 For some, the words 'seaside' and 'suicide' ebb and flow into one another in a queasy sort of way. My own favourite Mahon seaside poem is Ovid in Tomis, in which the poet, his name 'mud in the mouths of the Danube', fastens his 'sheepskin/ By greasy waters/ In a Scythian wind' and asks:

What nereid the unsinkable
Coca-Cola
Knocking the icy rocks?
...

Among these morose
Dice-throwing Getes
And the dust of Thrace.

No doubt, in time
To come, this huddle of
Mud huts will be

A handsome city,
An important port,
A popular resort

With an oil pipeline,
Martini terraces
And even a dignified

Statue of Ovid
Gazing out to sea
From the promenade;

But for the moment
It is merely a place
Where I have to be.

Six years now
Since my relegation
To this town

By the late Augustus.
The Halieutica ,
However desultory,

Gives me a sense
Of purpose,
However factitious;

But I think it's the birds
That please me most,
The cranes and pelicans.

I often sit in the dunes
Listening hard
To the uninhibited

Virtuosity of a lark
Serenading the sun
And meditate upon

The transience
Of earthly dominion,
The perfidy of princes.

Any artist contemplating a Melencolia II need look no further for symbols than an unsinkable Coca-Cola can knocking icy rocks.

I like the idea of gulls going window shopping.

Eric Thomson: Thank you very much for stopping by again, and for 'Ovid in Tomis.' Yes, Mahon is quite the poet of detritus and rubbish (in addition to sea-coasts), isn't he? I think of 'A Disused Shed in Co. Wexford,' 'A Garage in Co. Cork,' 'The Apotheosis of Tins,' and 'The Mute Phenomena,' to name a few.

As always, great to hear from you.

From My Easy Chair: Thanks for visiting and commenting again. I'm pleased that you enjoyed the poem. I agree: the image of the gulls is a nice one.

Thomas Pynchon is the prose writer of detritus and rubbish.

I wonder if those (detritus and rubbish) were Ovid's muses for Metamorphoses.

From My Easy Chair: thanks for the comments. I must confess that Pynchon is unexplored territory for me. Mahon's 'Ovid in Tomis' (kindly provided to us by Eric Thomson) certainly suggests that you could be right about Ovid's muses!