Louis MacNeice's "Selva Oscura" brings to mind a quiet poem about two people who are not lost in a "dark wood."  The poem is by Stanley Cook (1922-1991), who deserves to be better known.

The sky stops crying and in a sudden smile
Of childish sunshine the rain steams on the roofs;
Widow who has married widower
Poses outside the Registry for photographs.

Their grown up children are there
And damp confetti like a burst from a bag
Accumulated from a morning's marriages
Is second-hand for them against the door.

In the wood of the world where neither of them is lost
They take each other by the hand politely;
Borrowers going to and from the Library
Pass through the group as if it were a ghost. 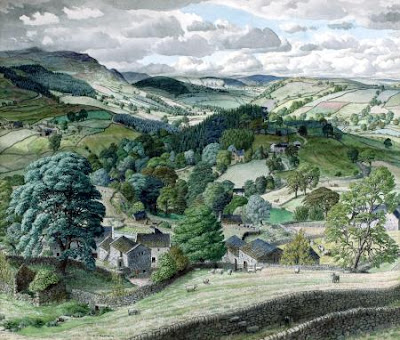 Beautiful poem and artwork. Thank you for the introduction.

From My Easy Chair: Thank you very much for visiting and commenting again. I'm pleased that you liked the poem and the painting. I have only recently discovered Stanley Cook's poetry, and am still exploring it.