The "country music" that one hears in today's world of popular entertainment is not country music.  If you wish to hear real country music you must go back to the sources.  For me (and for others of my generation, I suspect) that exploration began with a 1968 album (yes, album) by The Byrds:  Sweetheart of the Rodeo. 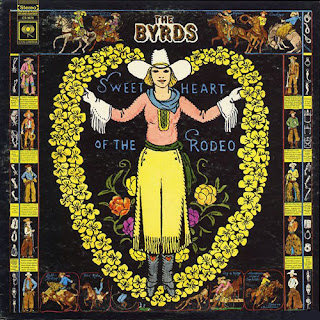 At that time (and to this day, come to think of it) country music was anathema to the soi-disant cognoscenti (who are always blinkered and deaf to the real thing) -- they believed that country music was the music of gun-totin', Bible-thumpin' rednecks.  Roger McGuinn and Chris Hillman of The Byrds knew better.  Fortunately for us, they stumbled upon Gram Parsons at a time when they needed to add some members to the group.  And the rest, as they say, is history.

Gram Parsons's legacy is a story in itself.  He died in 1973 at the age of 26.  But, before he died, he passed his love of traditional country music on to a generation of  people who might not have otherwise recognized its distinctive American beauty.  The Byrds hired Parsons to play piano (at which he was marginally proficient -- he mainly played guitar), but his enthusiasm convinced McGuinn and Hillman to make a country album.  McGuinn said later that he had merely intended to hire a piano player, but Parsons "exploded out of this sheep's clothing.  God!  It's George Jones!  In a sequin suit!" 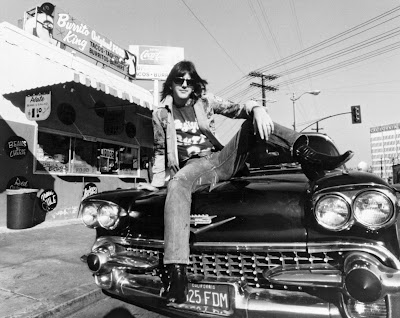 Sweetheart of the Rodeo is not a "cross-over" album, or a "fusion" album.  It is a traditional country album by young American musicians (The Byrds were rock stars at the time) who appreciated this unique form of American music.  I am certainly not claiming that The Byrds and Gram Parsons are the ultimate exponents of true country music -- for that, you need to go back to the Carter family, Roy Acuff, and the Louvin brothers and move forward from there.  But please listen to the album -- I recommend starting with "Hickory Wind," "You Don't Miss Your Water," and "One Hundred Years from Now" -- and you will hear American music at its best.
Posted by Stephen Pentz at 12:10 AM

Ooh you've thrown me a curve ball with this post - love it!

There are a couple of Gram Parsons albums (yes, albums) that I wore out while in college. This one is one of my faves as well (although the kids, when a song from this comes up on shuffle, give me the "this doesn't sound like the other songs you listen to" look).

Will do - going to search for it right now.

Murgatroyd: As always, thank you for stopping by. I'm pleased that you like the post. I hope that these periodic visits into Americana may be of interest to some folks out there. This particular subject is dear to my heart. I'm sure that I will be visiting Gram Parsons again.

Dwight: Thank you very much for visiting and commenting again. I'm happy to find someone who grew up with "albums" -- like you, I wore out a few Gram Parsons (and Flying Burrito Brothers) albums when I was in college. And I am old enough to remember reading in the LA Times about his death out at Joshua Tree.

As always, thanks for dropping in.

zmkc: Great to hear from you again. I hope that you like what you hear. If you do, you may wish to move on to "G.P." and "Grievous Angel" -- Gram Parsons's solo albums (with Emmylou Harris singing harmony). As ever, thank you.

Mr Pentz: I'm strictly classical music and jazz; any idea I have about country music is based on watching films like Deliverance. However if it appeals to a cultivated sensibility like yours, I'm going to give it a listen.

PAL: Thank you for stopping by again. As always, you are too kind -- I blush at the phrase 'cultivated sensibility.' Once you listen to country music, you may wish to withdraw the compliment!

Now I begin to worry that I have gotten myself into a fix -- have I been guilty of pressing haggis (no offense intended, Scotland) on an unsuspecting world?

As I indicated in my response to zmkc's comment, I also recommend 'G.P.' and 'Grievous Angel' by Parsons as good starting points. Also, anything by Emmylou Harris, whose harmonies with Parsons are legendary. Although she has always been faithful to traditional country music, she has tried to create (I think) what Parsons called 'Cosmic American Music' -- a hybrid of all of our musical heritage.

Finally, if you wish to hear true, old-time country music, search out 'Will the Circle Be Unbroken' (1972), a collaboration between the Nitty Gritty Dirt Band and some of the early country music legends. (There are two later volumes, but I would start with the original.)

As always, thank you for your kind comments, PAL.