"From Fifty To Sixty, One Is Free From All Ills": Po Chu-i

As one tops a hill and contemplates the path ahead, the words of the T'ang Dynasty poets come in handy -- their poems are filled with journeys and leave-takings, each unfolding in a particular place and in a particular season.  But Romantic effusions are generally kept in check:  what they offer is straightforward talk in a minutely beautiful world.

Lately I have been considering "On Being Sixty" by Po Chu-i (772-846).  Selfishly, I have taken an interest in what he has to say about the years between 50 and 60, whose hill I am ascending, and soon will top.

Between thirty and forty one is distracted by the Five Lusts;
Between seventy and eighty one is prey to a hundred diseases.
But from fifty to sixty one is free from all ills;
Calm and still -- the heart enjoys rest.
I have put behind me Love and Greed, I have done with Profit
and Fame;
I am still short of illness and decay, and far from decrepit age.
Strength of limb I still possess to seek the rivers and hills;
Still my heart has spirit enough to listen to flutes and strings.
At leisure I open new wine and taste several cups;
Drunken I recall old poems and chant a stray verse.
To Tun-shih and Meng-te I offer this advice:
Do not complain of three-score, "the time of obedient ears."

The translation is by Arthur Waley.  In a footnote to the final line, Waley writes:  "Confucius said that not till sixty did 'his ears obey him'."  Arthur Waley, Chinese Poems (1946).

"Free from all ills?"  "Calm and still -- the heart enjoys rest?"  Love, Greed, Profit, and Fame "put behind me" or "done with?"  It sounds as though I am living in paradise. 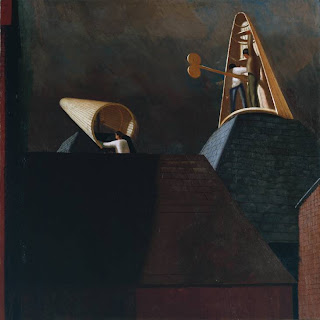 Being born in 1956 I'm on the same hillside as yourself. Despite being full of most of the things Po Chu-i has managed to put behind him I still like this poem. Perhaps it's because it throws such a flattering light on our age-group – makes a change from;

That is very cheering indeed, thank you.

pomposa: we share the same year -- best known (apart from the Hungarian revolt) for Elvis Presley's first appearance on the Ed Sullivan Show! Thank you for the rhyme -- I see that we are in the "a slowin'" phase, and soon will be "off the wall." No help for it.

zmkc: yes, at least we are spared from "a hundred diseases" for a while, not to mention "illness and decay." And it is good to be rid of "the Five Lusts" (whatever they may be).

A lot of women complain about getting old and getting no attention; I find it such a relief. Maybe lust for attention is one of the five?

zmkc: I agree that 'lust for attention' (vanity?) is a candidate -- I am going to have to track this Five Lusts business down. I suspect that it must come from Taoism and/or Buddhism and/or Confucius.

What a Blog! What riches!

I came here looking for the full text of 'From Fifty to Sixty' and found so much more - Edward Thomas, Coleridge, Laura Knight.

It is my birthday. Almost exactly 100 years ago Edward Thomas came almost past my house here in Pursuit of Spring on his bicycle. This afternoon I will seek out the rivers and hilltops on foot over the Quantocks in the Spring sunshine where Coleridge walked until I arrive hungry and happy at the Bicknoller Inn where I will feast with my family and drunkenly remember old poems.

Everything is falling into place. The day ahead is like destiny

Tim W: thank you very much for visiting, and for your kind words. I'm pleased that you found your way here, and I hope that you'll return.