One thing leads to another.  It seems that I am on my inadvertent way to compiling an anthology of roof poems -- or, to be more specific, roofs-after-rain poems.  It started with "The sky stops crying and in a sudden smile/Of childish sunshine the rain steams on the roofs" from Stanley Cook's "Second Marriage," which was followed by "our sky-blue slates are steaming in the sun" from "Kinsale" by Derek Mahon.

And now, here is a city scene from Douglas Dunn in which the rain has once again passed, leaving -- not steaming -- but shining roofs.  The Terry Street of the poem is the Terry Street of Hull -- home of Philip Larkin and Andrew Marvell, Member of Parliament from Hull.

On Roofs of Terry Street

Television aerials, Chinese characters
In the lower sky, wave gently in the smoke.

He kneels upright to rest his back.
His trowel catches the light and becomes precious. 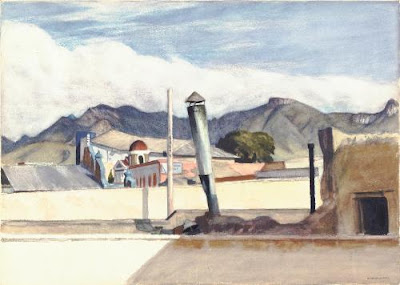 Gosh that's a beautiful poem--I copied it to share with my college students. Although I write about the lack of rain, I do love rain-shine, and as far as "roof" poems go, wasn't there a book of poems by a major poet (the name slips my mind) with a title something like:"I kept looking at the ceiling till I saw the sky"?

Does a ceiling count as a roof? If so, I suggest that book.

Shelley: thank you for visiting and commenting again. I'm glad that you like the poem. I can't recall the book of poems that you speak of -- if you recall the author, please let me know. Thanks again.

How about a during-rain poem like Hart Crane's "My Grandmother's Love Letter", a real gem.

ghostofelberry: as always, it is nice to have you stop by. Thank you very much for the recommendation of Crane's poem. I was not familiar with it, but I have tracked it down based on your suggestion -- it is indeed a real gem. Thanks again, elberry.