"Direct And Stark" But "By No Means Primitive": Rogier Van Der Weyden

In two previous posts, I provided details of a 15th-century painting from the Burgundian Netherlands, promising at the time that I would eventually provide the entire work.  The painting is by Rogier van der Weyden (1399-1464), and is usually called "The Deposition from the Cross."  It is in The Prado in Madrid.  It is believed that van der Weyden completed it around 1435. 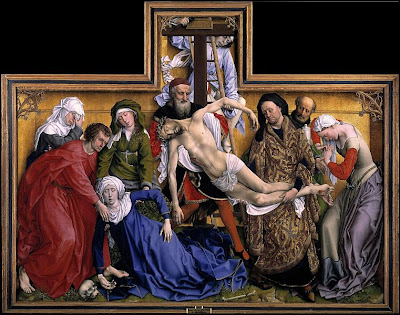 "The painting of the fifteenth century is located in the sphere where the extremes of the mystical and the crudely earthy easily touch one another.  The faith that speaks here is so overt that no earthly depiction is too sensuous or too extreme for it. . . . Though that faith is entirely direct and stark, it is by no means primitive on account of this.  To label the painters of the fifteenth century primitive means running the risk of a misunderstanding.  In this context, primitive can only mean coming first, in as far as an older painting is known to us; primitive is therefore only a purely chronological label.  But there is a general inclination to tie to this label the notion that the mind of these artists was primitive.  This is quite incorrect."

Johan Huizinga, The Autumn of the Middle Ages (translated by Rodney Payton and Ulrich Mammitzsch) (University of Chicago Press 1996), pages 317-318.
Posted by Stephen Pentz at 12:10 AM