"He Has No Nice Felicities That Shrink From Giant Horrors": Charlotte Smith

R. S. Thomas's "The Cat and the Sea" got me to thinking of poems that are set on seaside cliffs.  Here is a sonnet by Charlotte Smith (1749-1806), who was responsible for bringing the sonnet back to life in the late-18th century.

Sonnet.
On Being Cautioned Against Walking On
A Headland Overlooking The Sea, Because
It Was Frequented By A Lunatic.

Is there a solitary wretch who hies
To the tall cliff, with starting pace or slow,
And, measuring, views with wild and hollow eyes
Its distance from the waves that chide below;
Who, as the sea-born gale with frequent sighs
Chills his cold bed upon the mountain turf,
With hoarse, half-utter'd lamentation, lies
Murmuring responses to the dashing surf?
In moody sadness, on the giddy brink,
I see him more with envy than with fear;
He has no nice felicities that shrink
From giant horrors; wildly wandering here,
He seems (uncursed with reason) not to know
The depth or the duration of his woe.

Charlotte Smith, Elegiac Sonnets and Other Poems (Second Edition, 1800).  The italicized words in line 11 appear as such in the original.  In a note to the line, Smith states that the words have their source in two lines from Horace Walpole's The Mysterious Mother: A Tragedy (1791):  "'Tis delicate felicity that shrinks/When rocking winds are loud."

As to the subject matter and tenor of the poem:  Smith's poems are often reflective of a difficult life.  Her father forced her into an unwanted marriage at the age of 15, and she subsequently had 12 children.  Her husband was a spendthrift (in addition to being a philanderer), and, when he was sent to debtor's prison, she joined him there.  She eventually left him, and supported herself and her children with her writing (which included both novels and her sonnets).  When the popularity of her novels began to wane, she fell into poverty. 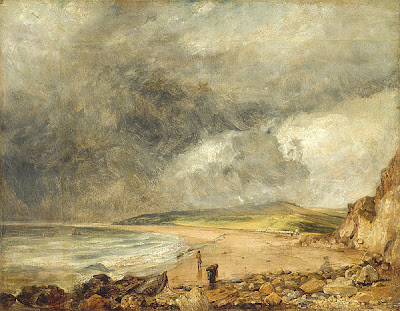 Nana Fredua-Agyeman: Welcome! Thank you very much for visiting and commenting. I'm pleased that you liked the poem.

"Uncursed with reason." What a thought-provoking phrase. I've read her novel The Old Manor House which was written in 1794. According the the blurb on the back page, Smith, at the time, was accused of "destroying the fabric of society" because of the novel's radical acceptance of rich and pour marrying. Interesting times. Glad I didn't live in them.

From My Easy Chair: I'm pleased that you noted "uncursed with reason" -- that is my favorite phrase in the poem. I haven't read any of her novels (for which she was quite famous, I understand), but I do know that they were thought "scandalous" at the time.

That surely is one of the most magnificently titled sonnets ever written!

Nige: thank you for stopping by again.

Yes, a lovely title, isn't it? It leapt out at me as I was thumbing through an anthology. I discovered that she was fond of these sorts of titles -- e.g., "On Passing Over a Dreary Tract of Country, and Near the Ruins of a Deserted Chapel, During a Tempest." But this is clearly her best.

As always, thanks for the visit.