Over the past few days, the sun has begun to feel like the true warm sun of Spring.  A pink camellia is blooming outside the kitchen window.  Wallace Stevens's words are appropriate:  "the colossal sun,/Surrounded by its choral rings."  ("Not Ideas About the Thing But the Thing Itself.")  Philip Larkin is not, perhaps, the person who would come first to mind when thinking of poetic celebrations of the sun.  But -- take heed! -- Larkin is not the dour personage of caricature.

Surprisingly, Larkin is so enthused about the sun that he pretty much abandons his usual forms and rhymes.  Angels even make an appearance (though coupled with our ever-present "needs").  Of course, "lonely horizontals" is there as a reminder of the other Larkin.  As is "an unfurnished sky," which brings to mind "the deep blue air, that shows/Nothing, and is nowhere, and is endless" of "High Windows."  But let's put that aside:  today is a day for a "suspended lion face."  (For another Larkin celebration of the sun, please see 'Long lion days,' which was written three years before his death.) 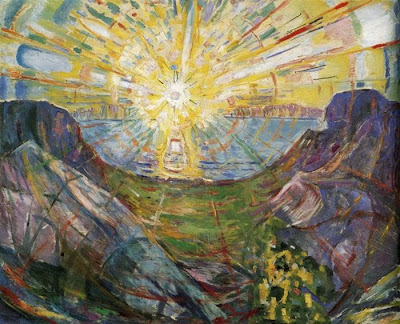 Yes, an unusual poem for him, I think. To me it reads like a parody (especially lines like 'How still you stand', 'Heat is the echo of your gold'), though of whom I've no idea.
But as you say, more importantly is spring is here!

pomposa: although, if I think about it further, Larkin did depart from form and rhyme on other occasions as well: for instance, think of 'Coming,' 'Going,' and 'Born Yesterday' in The Less Deceived. That being said, his departures are as skillful as all else that he wrote, aren't they?

As to whether he was parodying anyone: in my curmudgeonly view he would be parodying 98% of post-World War II American poetry and a substantial majority of post-War British poetry. And he does it better than any of those poetasters.

As ever, thanks for stopping by, and for the comments.