Hospital Poems, Part Two: "Nothing Whatever Is By Love Debarred"

Quite some time ago, I started a Hospital Poems series, but only got as far as John Betjeman's "The Cottage Hospital."  I have been led (cheerfully) down other paths since that time.  As I noted in Part One of the series, I am not aware of (nor have I looked for) an anthology of poems about hospitals.  This is merely a personal selection of poems that I have stumbled upon over the years.  Today's poem is by Patrick Kavanagh.

A year ago I fell in love with the functional ward
Of a chest hospital:  square cubicles in a row
Plain concrete, wash basins -- an art lover's woe,
Not counting how the fellow in the next bed snored.
But nothing whatever is by love debarred,
The common and banal her heat can know.
The corridor led to a stairway and below
Was the inexhaustible adventure of a gravelled yard.

This is what love does to things:  the Rialto Bridge,
The main gate that was bent by a heavy lorry,
The seat at the back of a shed that was a suntrap.
Naming these things is the love-act and its pledge;
For we must record love's mystery without claptrap,
Snatch out of time the passionate transitory.

A note on the reference to "the Rialto Bridge":  in 1955, Kavanagh had a cancerous lung removed at the Rialto Hospital in Dublin.  He later gave his surgeon a signed copy of one of his books, inscribing it:  "a token of remembrance of a curious happiness I knew when in the Rialto Hospital a year ago." 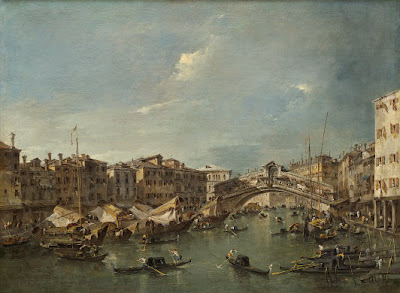 Rialto is a working class area of Dublin so called because the local bridge over the Grand Canal (the subject of Kavanagh's poem Canal Bank Walk and host to a statue of him) was said to resemble Venice's Rialto Bridge. Having seen both I can only guess the person who made the connection had never been next or near Venice.

B McMahon: Thank you very much for visiting, and for the kind words.

And thank you as well for the information about 'Rialto' in Dublin. I only knew about the Rialto Hospital from having read a little bit about Kavanagh, and I hadn't realized that 'Rialto' was the name of a neighborhood as well. This helps to put the whole series of 'Canal Bank poems' in context for me.

Thank you for introducing me to another poet. Anyone who uses "love's mysteries" and "claptrap" in the same line is wonderful!

From My Easy Chair: thank you for visiting again. I'm pleased that you liked the poem, and I'm glad that I could introduce you to Patrick Kavanagh.