I discovered Joan Barton (1908-1986) via Philip Larkin's The Oxford Book of Twentieth-Century English Verse.  In compiling that much-maligned anthology, Larkin chose poems (shockingly!) that he liked, and gave short shrift (imagine that!) to "modernism."  One of the poems that he chose was Barton's "The Mistress," which is the title poem of Barton's first collection (published when she was 64).  Barton was a bookseller who had a shop in Marlborough for 20 years, and then moved to Salisbury.  The following poem reflects one aspect of her profession:  buying books at an auction or an estate sale.

There are always lives
Left between the leaves
Scattering as I dust
The honeymoon edelweiss
Pressed ferns from prayer-books
Seed lists and hints on puddings
Deprecatory letters from old cousins
Proposing to come for Easter
And always clouded negatives
The ghost dogs in the vanishing gardens:

Fading ephemera of non-events,
Whoever owned it
(Dead or cut adrift or homeless in a home)
Nothing to me, a number, or if a name
Then meaningless,
Yet always as I touch a current flows,
The poles connect, the wards latch into place,
A life extends me --
Love-hate; grief; faith; wonder;
Tenderness.

Joan Barton, The Mistress and Other Poems (1972).  Larkin did not include this poem in his anthology, but one can see from it why he might have liked Barton's poetry.  Consider, in particular, the last five lines:  they have a certain "Larkin" feel about them, I think. 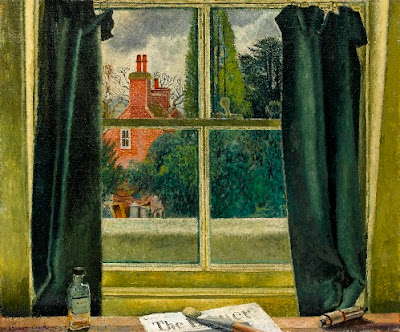 I don't know if you know The Age of Uncertainty blog, but he often posts about old photographs and what Joan Barton refers to as the 'Fading ephemera of non-events'. Here's the link: http://ageofuncertainty.blogspot.com/

I'm pleased that you liked the poem, pomposa. I agree that she deserves a wider audience.

Thank you very much for the link to The Age of Uncertainty, zmkc. I hadn't come across it before -- it is a great blog! And the posts on old photos certainly do tie-in well with Barton's thoughts. Thanks again.

"Homeless in a home." Powerfully sad. Thank you for another introduction.

From My Easy Chair: yes, that is a harrowing phrase, isn't it? I'm happy that I could introduce you to Barton's poetry. As ever, thanks for dropping in.