A Lost World, Part One: "The Backward Glance"

I am not fond of the artists of the "High Renaissance."  I confess that Michelangelo, da Vinci, Titian, and Raphael leave me cold.  Instead, I prefer the artists of the early- to mid-15th century, when the influence of the Middle Ages was still present.  Thus, in Italy, I favor Fra Angelico (c. 1395-1455) and Benozzo Gozzoli (c. 1421-1497) -- in particular, Fra Angelico's frescoes in San Marco and Gozzoli's frescoes in the Palazzo Medici-Riccardi.

But the best painting of the 15th century lies, in my humble opinion, not in Italy, but in the Burgundian Netherlands (the various duchies and fiefdoms ruled by the House of Valois-Burgundy).  The art is sometimes designated as "early Netherlandish painting" or "late Gothic painting," and the artists (for instance, Robert Campin, Jan van Eyck, and Rogier van der Weyden) are sometimes identified as "the Flemish Primitives."  But the labels are irrelevant.  In fact, as soon as I typed them, I got a queasy feeling -- I do not wish to enter the land of art-critical jargon.

Instead, we are better off just looking.  Here is a detail from a painting by one of the best artists of the time.  For now, I will not identify the artist, because I do not want a name to get in the way of looking.  I intend to re-visit the painting in a subsequent post, where all will be revealed. 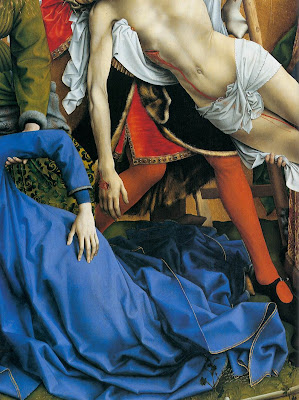 Of course, there is much that can be said, starting with the colors, the textures, the movement, the "minute particulars" . . . but I get that queasy feeling again.  However, the painting does prompt me to say this (and thus sound like a reactionary):  the idea that civilization progresses over time is, to quote the title of a poem by C. S. Lewis, "a vulgar error."  Here are two stanzas from the poem:

If, then, our present arts, laws, houses, food
All set us hankering after yesterday,
Need this be only an archaising mood?

Why, any man whose purse has been let blood
By sharpers, when he finds all drained away
Must compare how he stands with how he stood.
Posted by Stephen Pentz at 12:05 AM

van Eyck - a primitive? 'Some mistake surely, ed.', to quote Private Eye. Artists of today are primitive in the extreme beside his moving and remarkable achievements. His self portrait (if it is him) in the National Gallery is one of the few things I miss about London. And there is a magnificent painting by him in the Louvre - but I must stop; just thinking about his paintings makes me feel peculiarly emotional. A wonderful painter and in no way primitive - art-jargon, pshaw. I look forward to further musings from you on this subject.

Mr P: "Primitives" - who thinks up these labels? I know the painting - wonderful, tho I always have the feeling with these painters that you really do have to go and see the originals.

In his criticism too, Lewis was good on what the historian EP Thompson called "the infinite condescension of posterity". I have the feeling it's a characteristic vice of our age.

Please keep putting up less well-known Stanley Spencers. I like him, but you've already shown several of his I've never seen before.

zmkc: yes, the progression from van Eyck to Warhol to Damien Hirst says it all, I think. Warhol and Hirst are easy targets, of course, but the evidence, as they say, speaks for itself.

I envy you having seen the van Eycks in the flesh. As for the painting in the post, it is located in the Prado -- I have never seen it, but perhaps there is still time.

As ever, thank you for the visit and comment.

PAL: thank you very much for the wonderful quote from E. P. Thompson! I agree that what he describes is 'a characteristic vice of our age.' (To the extent that there is even an awareness of the past, which is another matter in itself.)

Your point about seeing the originals is well taken -- I often wonder about the accuracy of what is reproduced on the page (or in this context).

I'm pleased that you like the Spencers -- I've been discovering that there is much by him that I haven't seen.

Tim: thank you very much for stopping by again, and for the kind words.

Fantastic - I'm going to Madrid in June. I shall seek it out.

zmkc: well, that is good timing! Please report back on how it looks -- I'm interested to find out how well-preserved it is.