A Lost World, Part Two: "All Events Had Much Sharper Outlines Than Now"

Johan Huizinga (1872-1945) stated that he began writing The Autumn of the Middle Ages (1919) in order to "better understand the art of the van Eyck brothers and that of their successors and to view these artists in the context of the life of their time."  As I mentioned in a previous post, Jan van Eyck was one of the many remarkable painters at work in the Burgundian Netherlands in the 15th century.  These painters included his brother Hubert as well as, among others, Robert Campin, Rogier van der Weyden, Hugo van der Goes, and Hans Memling.

In the previous post, I included a detail from a painting by an artist of the period.  I promise that I will disclose the name of the artist and the title of the painting in a later post.  But, for now, here are two more details from the painting, accompanied by passages from The Autumn of the Middle Ages.  Huizinga wrote in Dutch.  The following translations are by Rodney Payton and Ulrich Mammitzsch from an edition published in 1996 by The University of Chicago Press. 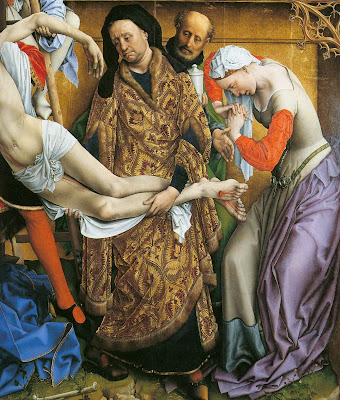 "When the world was half a thousand years younger all events had much sharper outlines than now.  The distance between sadness and joy, between good and bad fortune, seemed to be much greater than for us; every experience had that degree of directness and absoluteness that joy and sadness still have in the mind of a child.  Every event, every deed was defined in given and expressive forms and was in accord with the solemnity of a tight, invariable life style." 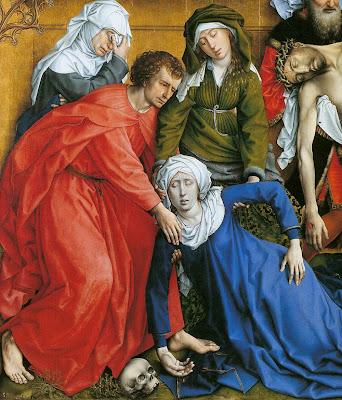 "There was less relief available for misfortune and for sickness; they came in a more fearful and more painful way.  Sickness contrasted more strongly with health.  The cutting cold and the dreaded darkness of winter were more concrete evils. . . . Just as the contrast between summer and winter was stronger than in our present lives, so was the difference between light and dark, quiet and noise.  The modern city hardly knows pure darkness or true silence anymore, nor does it know the effect of a single small light or that of a lonely distant shout."
Posted by Stephen Pentz at 12:05 AM

Here in Burgundy (in Beaune - best known for its wine trade) is a stunning polypytich by Van der Wedyen. Its portrayal of the Last Judgement illustrates very well what Huizinga was getting at.

I hope this link works;
http://t3m.voila.net/doc_jugement_dernier.htm

I understand the idea of the difference between light and dark and noise and quiet when comparing "then" to the modern city. However, it seems to me that the contrast between sickness and health is no different today since we still have incurable diseases. I don't understand the concept that the "distance" between sadness and joy and good and bad fortune was greater then. Don't we have more uncontrollable forces in our lives that we know could cause total destruction then they did "then"?

Thank you for stopping by again, pomposa. And thank you very much for the link! You are fortunate to have that in your neighborhood.

From My Easy Chair: as always, thank you for visiting, and for your comment. I cannot presume to speak for Huizinga, of course. But perhaps what he is getting at is that, in those days, people did not have access to the "knowledge" and "explanations" that we have access to today. Thus, being visited with sadness or calamity perhaps had more of an air of divine mystery and randomness than it does today. Just a guess, mind you.

That's an amazing point about all events in the past having sharper outlines.

In our time, the general blurring comes from the fact that the "elephant in the room" cannot be visualized: Multi-National Corporations.

Mr P: I know the passage almost by heart, and still have the battered Pelican paperback in which I first read it as a teenager. It gave me my first real insight into the otherness of the past. Very few scholars - particularly historians - appear to have this kind of perception. I think it's what the great Ranke was talking about when he wrote that the task of historical writing is to present the past "as it essentially was".

Huizinga had the most stimulating of minds. His Homo Ludens is a great book too.

Shelley: thank you for visiting and commenting again.

As to your comment about the cause of "the general blurring" in modern life: hmmm . . . this is not a political blog, so I will only say that I, personally, would not lay our modern predicament at the door-step of "Multi-National Corporations." (Whatever they are.) After all, I suppose that Google qualifies as a "Multi-National Corporation", and look what we're doing!

But, then, I am quite fond of Adam Smith, so you are probably talking to the wrong person.

From My Easy Chair: thank you for your comment (in response to my response), but I was only making a stab in the dark -- Huizinga is quite thought-provoking, and I cannot say that I have myself resolved the points that you raise. Thanks again.

PAL: I cannot read Dutch, so I wonder how much I am missing in translation. But his combination of illuminating detail and, as you say, "perception" is wonderful, even in translation. I have not, unfortunately, read "Homo Ludens" -- on the "to do" list!

As ever, thank you very much for stopping in!