"March . . . Someone Has Walked Across The Snow, Someone Looking For He Knows Not What"

Two of my favorite Wallace Stevens poems are set in March.  Stevens is a fine poet of winter (and of snow in particular).  He is equally fine when it comes to . . . well, the end of winter.  Here is the first of the two poems (the other will come in a few days).

Vacancy in the Park

March . . . Someone has walked across the snow,
Someone looking for he knows not what.

It is like a boat that has pulled away
From a shore at night and disappeared.

It is like a guitar left on a table
By a woman, who has forgotten it.

It is like the feeling of a man
Come back to see a certain house.

The four winds blow through the rustic arbor,
Under its mattresses of vines.

This poem was written when Stevens was in his seventies.  It was published the year before his death.  I have suggested previously that Stevens's late poems have a character that is quite different from his earlier work -- they are less ostentatious and abstract, more straightforward and emotional.  Yet, things are still approached at an angle -- you have to listen to the music and just let it sink in for a while. 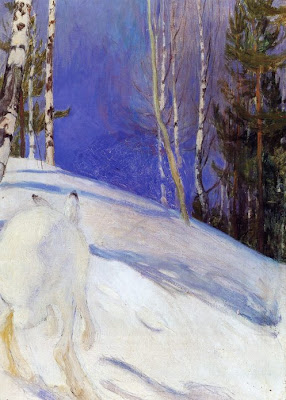 From My Easy Chair: as always, thank you for visiting and commenting. Yes, it is a thought-provoking poem -- although I cannot say that I know what it means.

The changing and ephemeral quality of life? The fun of poetry is trying to find meaning isn't it.

From My Easy Chair: given that Stevens wrote the poem in his seventies, time and change were no doubt on his mind -- and most of his late poems reflect this. Thank you for the comment.