One evening this past week, after sundown, I sat beside an open window that looks on to the back garden, reading Wordsworth's "Louisa: After Accompanying Her on a Mountain Excursion."  I soon heard, from a few blocks away, a live band begin to play.  A birthday party?  A wedding reception?  Simply a summer soirée?

I read and I listened.  I discovered that the band was playing mostly Top 40 songs from the 1970s:  my high school and college years.  I was compelled to pay closer attention, for part of my life was being played back to me.  I bid farewell to Louisa.  The sound came and went on the breeze:  it took me 30 seconds or so to recognize each song after it began.  "Take It Easy."  Of course.  "Blue Bayou" (via Linda Ronstadt, I presume, not Roy Orbison).  Steve Miller's "Jungle Love."  And so on.

Later in the evening came a moment of inspiration from whoever was selecting the songs for the band's playlist:  "Amie" by Pure Prairie League.  What a wonderful surprise.  I always loved that song, but I hadn't thought of it for years.  The World is forever bestowing unbidden gifts upon us.

Earlier in the week, while browsing in F. L. Lucas's Greek Poetry for Everyman, I came upon this:

Of the Gods and these other matters none knows the verity --
No man that lived before us, no man that yet shall be.
However full-perfected the system he hath made,
Its maker knoweth nothing.  With fancy all's o'erlaid.

A fine thought.  Beware of the architects, and the bearers, of systems. We are all ignorant.  The sooner we acknowledge our ignorance, the better. 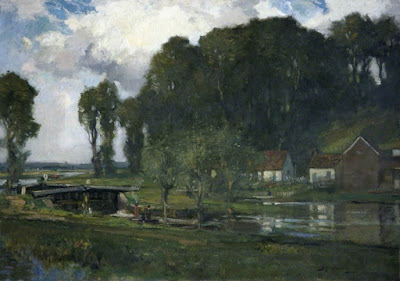 I have spent most of this month with ancient Greek poets, Walter Pater, and William Wordsworth.  This was not a plan, just a happy accident.  I am finding they go well together.  A day or so after reading the four lines by Xenophanes, I read this:

"He was always a seeker after something in the world that is there in no satisfying measure, or not at all."

Another fine thought.  A lovely thought.  Or so it seems to me.  A thought that some may feel the force of.  Others, not.  That's how these things go. 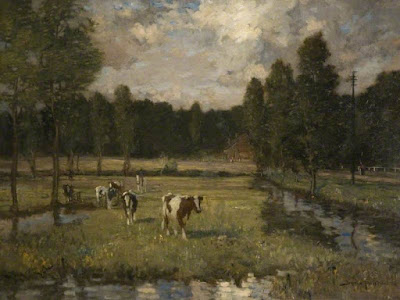 Awaiting me at the end of the week was this:

Treat well the living.  Dead men are but dust
And shadow:  our nothingness to nothing goes.

Euripides (translator unknown), in T. F. Higham and C. M. Bowra (editors), The Oxford Book of Greek Verse in Translation (Oxford University Press 1938), page 460.  The lines are from Meleager, a play of which only fragments exist.

Those are the three thoughts that came my way this week.  I feel fortunate they found me.

One more thought:  the hydrangeas in this part of the world seem unusually brilliant this year.  The blue takes your breath away.  I wonder:  has this always been the case?  Have I been asleep all these years? 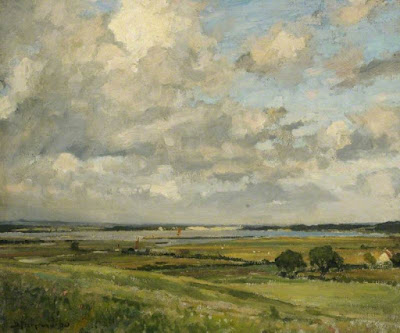 It is July, and the sweet peas -- purple-pink, pink-purple, and, now and then, white -- are in bloom on both sides of a path I walk along between two large meadows, one sloping down to Puget Sound, the other bounded on its eastern edge by a long row of big-leaf maples. In the afternoon, the swallows dive and curve and rise across the path as they fly quickly back and forth over the meadows, feeding.  On a day with wind, the dry grass rustles and whispers.  Bird sounds can be heard overhead, and from all corners of the World.

The past few weeks, I have returned to ancient Greek poetry.  (Alas, in translation, I'm afraid.)  As I walk through the meadows, I am apt to fancy that I have returned to that golden land and time, surrounded by small and beneficent gods inhabiting the fields and trees and sky.  Am I in Arcadia?  Ionia?  Attica?  Somewhere in the Cyclades?

Ah voices sweet as honey, ah maiden songs divine,
Faint grow my limbs and fail me!  Would the halcyon's lot were mine!
Wherever the white foam flowers, with my fellow-birds to fly,
Sea-purple bird of the springtime, blithe heart where no cares lie.

Oh, to abide in Alcman's world of halcyons and flowering white foam! The prevailing modern world-view (a spawn of the so-called "Age of Enlightenment") is reductive and soulless.  Whether one accepts this state of affairs is a matter of choice.  Fortunately, there are alternative paths on which to make one's way through "the vale of Soul-making":

"The longer we contemplate that Hellenic ideal, in which man is at unity with himself, with his physical nature, with the outward world, the more we may be inclined to regret that he should ever have passed beyond it, to contend for a perfection that makes the blood turbid, and frets the flesh, and discredits the actual world about us."

Another translation of Alcman's four lines:

No more, O maiden voices, sweet as honey, soft as love is,
No more my limbs sustain me. -- A halcyon on the wing
Flying o'er the foam-flowers, in the halcyon coveys,
Would I were, and knew not care, the sea-blue bird of spring! 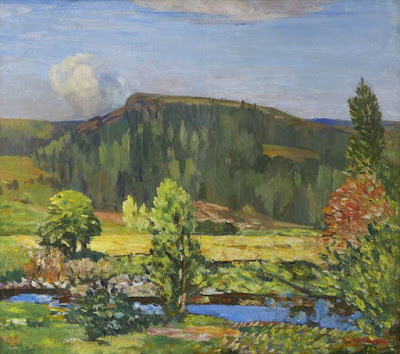 Pater is exactly right:  one of the many evils of the modern world-view is this "contend[ing] for a perfection that . . . discredits the actual world about us."  I couple "perfection" with the modern gospels of Progress and Science.  No room for halcyons, white foam-flowers, and small and kindly gods in that world.  Pantheism is out of the question, beyond the pale.  Wordsworth continually reminds us of what has been lost.  One small instance, in a fragment of verse:

[A side-note:  one might be surprised, but Pater was actually quite sympathetic with Wordsworth's poetry, and with the view of the World that is embodied in it.  I recommend reading his essay "Wordsworth" in Appreciations (Macmillan 1889).  Among many other fine things, he says this:  "Against this predominance of machinery in our existence, Wordsworth's poetry, like all great art and poetry, is a continual protest."  Appreciations, page 61.]

But it is time to return to Greece:

Consider Simonides' poem in the context of another passage from Pater:

"Modern science explains the changes of the natural world by the hypothesis of certain unconscious forces; and the sum of these forces, in their combined action, constitutes the scientific conception of nature.  But, side by side with the growth of this more mechanical conception, an older and more spiritual, Platonic, philosophy has always maintained itself, a philosophy more of instinct than of the understanding, the mental starting-point of which is not an observed sequence of outward phenomena, but some such feeling as most of us have on the first warmer days in spring, when we seem to feel the genial processes of nature actually at work; as if just below the mould, and in the hard wood of the trees, there were really circulating some spirit of life, akin to that which makes its energies felt within ourselves"

Walter Pater, from "The Myth of Demeter and Persephone," in Greek Studies: A Series of Essays (Macmillan 1895), page 96.

Pater qualifies his statement:  "as if just below the mould, and in the hard wood of the trees, there were really circulating some spirit of life."  (He had been accused of being a pagan based upon the controversial "Conclusion" of The Renaissance.  Perhaps he did not want to fight that battle again.)  Still, the dichotomy he posits is clear: a "mechanical conception" of the World as opposed to "an older and more spiritual" view of the World, a World in which "some spirit of life" circulates.  Again, the choice is ours.

Democritus slept soundly, thanks to me
Of silver sounds the wingèd minister,
And thanks to him this little grave you see,
Nigh to Oropus, holds his grasshopper. 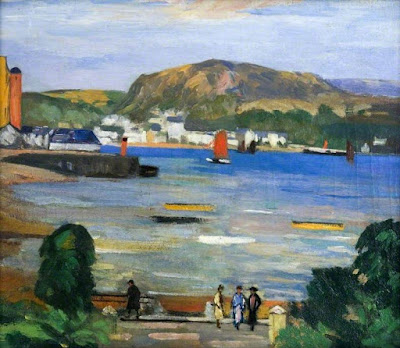 But who am I to judge?  I have never been at home in the modern world, and never will be.  Not surprisingly, this feeling intensifies with age.  One reaches a point where one becomes comfortable with the idea of departing.  In the meantime, I am, and will be, quite content with ancient Greek poets, Walter Pater, and William Wordsworth.  And with all those others who you see pass through here.

Though little be the tombstone, O passer-by, above me,
Though it lies thus lowly in the dust before your feet,
Give honour to Philaenis, good friend, that she did love me,
Her once wild thistle-climber, her clamberer in the wheat,
Her cricket, her sweet songster, whom for two years she cherished,
Loving the sleepy music of my whirring wing.
She has not forgot me:  she gave me, when I perished,
This tiny tomb in honour of so versatile a thing.

Another passage from Pater, which is a continuation of the passage quoted immediately above:

"Starting with a hundred instincts such as this, that older unmechanical, spiritual, or Platonic, philosophy envisages nature rather as the unity of a living spirit or person, revealing itself in various degrees to the kindred spirit of the observer, than as a system of mechanical forces.  Such a philosophy is a systematised form of that sort of poetry (we may study it, for instance, either in Shelley or in Wordsworth), which also has its fancies of a spirit of the earth, or of the sky, -- a personal intelligence abiding in them, the existence of which is assumed in every suggestion such poetry makes to us of a sympathy between the ways and aspects of outward nature and the moods of men."

Walter Pater, from "The Myth of Demeter and Persephone," Greek Studies: A Series of Essays, pages 96-97.

To the Cicada
From the Greek of an
Anacreontic writer

We bless you, cicada,
When out of the tree-tops
Having sipped of the dew
Like a king you are singing;
And indeed you are king of
These meadows around us,
And the woodland's all yours.
Man's dear little neighbour,
And midsummer's envoy,
The Muses all love you,
And Apollo himself does --
He gave you your music.
Age cannot wither you,
Tiny philosopher,
Earth-child, musician;
The world, flesh and devil
Accost you so little,
That you might be a god. 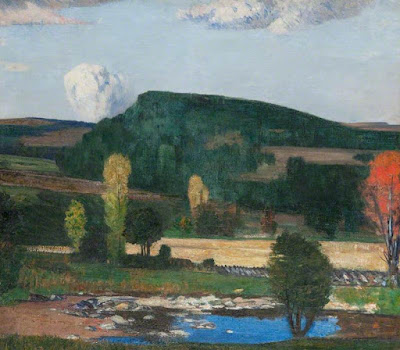