The Sea At Night

I recently visited the north shore of Lake Superior in Minnesota.  The ice was gone, and the weather was cool and clear -- a wide open, brilliant blue world.  If you travel far enough north, you lose sight of the south (Wisconsin) shore.  It becomes easy to imagine that you are at the edge of a sea.  One night, the following two poems came to mind.

Far off a lonely hound
Telling his loneliness all round
To the dark woods, dark hills, and darker sea;

And, answering, the sound
Of that yet lonelier sea-hound
Telling his loneliness to the solitary stars.

Hearing, the kennelled hound
Some neighbourhood and comfort found,
And slept beneath the comfortless high stars.

But that wild sea-hound
Unkennelled, called all night all round --
The unneighboured and uncomforted cold sea.

The second is by R. S. Thomas:

There are nights that are so still
that I can hear the small owl calling
far off and a fox barking
miles away.  It is then that I lie
in the lean hours awake listening
to the swell born somewhere in the Atlantic
rising and falling, rising and falling
wave on wave on the long shore
by the village, that is without light
and companionless.  And the thought comes
of that other being who is awake, too,
letting our prayers break on him,
not like this for a few hours,
but for days, years, for eternity. 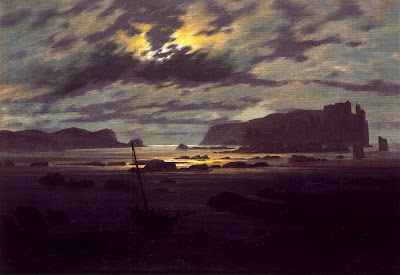 Caspar David Friedrich, "Northern Sea in the Moonlight" (1824)
Posted by Stephen Pentz at 7:20 AM