I cannot gainsay the importance of freeways and motorways and expressways to the felicity of our Modern World.  I have driven the length and breadth of the U.S.A. on more than one occasion, and there is nothing finer than travelling beneath a huge sky on Interstate 40 out in the Texas Panhandle, heading toward Albuquerque -- particularly if you are listening to Gram Parsons sing "Return of the Grievous Angel" with Emmylou Harris.

And yet, one wonders . . . I have seen, high up on the Great Divide in Wyoming, the remnants of wagon wheel ruts on the Oregon Trail.  And I have seen, just off the Natchez Trace Parkway near the Mississippi River, the sunken, shadowy trail beneath the trees that marks the old Natchez Trace.  In both places you could hear a pin drop.

The arteries, red lane on lane,
Cover the engineers' new maps:
England lies lost to silence now:
On bridges, where old roads cross
The chasm of the new, the idlers
Stand staring down.  Philosophers
Of the common run, some masticate pipe-stems,
And seem not to hear the roar in Albion's veins,
As though the quiet, rebegotten as they lean, survived
Through them alone, its stewards and sustainers,
For all these advancing and disappearing lives. 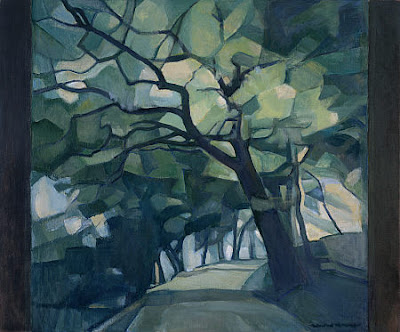