"The Woods Are Lovely, Dark And Deep"

"Stopping by Woods on a Snowy Evening" and "The Road Not Taken" are probably Robert Frost's "best known" and "best loved" poems.  They are so familiar that it is difficult to read them with freshness.  Although, for Americans of a certain age (I will not presume to speak for any American born after Dwight D. Eisenhower's first term in office), it may not even be necessary to read them since they have been embedded in our memory from an early age.  In any event, they are worth revisiting.

Stopping by Woods on a Snowy Evening

Whose woods these are I think I know.
His house is in the village though;
He will not see me stopping here
To watch his woods fill up with snow.

My little horse must think it queer
To stop without a farmhouse near
Between the woods and frozen lake
The darkest evening of the year.

He gives his harness bells a shake
To ask if there is some mistake.
The only other sound's the sweep
Of easy wind and downy flake. 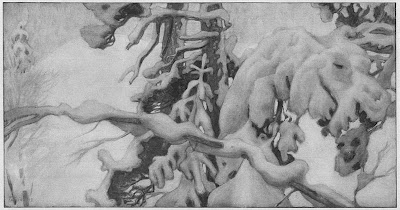 As a start to considering the artistry behind the poem, I find the following comment by Jay Parini  to be very helpful:  "The aphoristic quality of this little poem, which seems so natural that one cannot imagine its having been invented, is such that one can hardly not memorize it."  Jay Parini, Robert Frost: A Life (1999), page 213 (emphasis in original).

And consider a point of punctuation.  After Frost's death, Edward Connery Lathem "edited" a new edition of Frost's collected poems.  As part of his "editing," Lathem decided to "correct" the punctuation of a number of the poems.  One of his "corrections" was to change the first line of the final stanza from "The woods are lovely, dark and deep" to "The woods are lovely, dark, and deep."  In his excellent study of Frost's poetry, Richard Poirier has this to say about Lathem's change:

In fact, the woods are not, as the Lathem edition would have it (with its obtuse emendation of a comma after the second adjective in line 13), merely "lovely, dark, and deep."  Rather, as Frost in all the editions he supervised intended, they are "lovely, [i.e.] dark and deep"; the loveliness thereby partakes of the depth and darkness which make the woods so ominous.

William Pritchard, who has written a fine study of Frost's poetry (Frost: A Literary Life Reconsidered), echoes Poirier's criticism of Lathem's change to the line:

"The woods are lovely, dark and deep," now has an added comma after "dark."  It is as if a prim schoolmaster were at work, showing his concern for Robert's getting the correct punctuation into the business or friendly letter so that his English will be Good and Understood By All, rather than "Under a spell so the wrong ones can't find it,/So can't get saved."

William Pritchard, "Frost Revised," Playing It By Ear: Literary Essays and Reviews (1994), page 26.  Fortunately, the original version ("dark and deep") has been restored in the Library of America edition of Frost's poetry and prose edited by Richard Poirier and Mark Richardson. 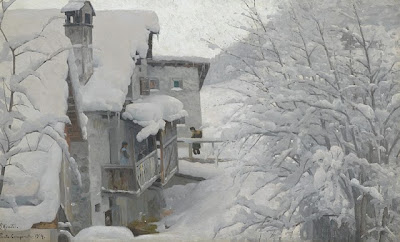 Mark Richardson wrote about what Robert Frost had to say about this poem in his blog posting “There is no greater fallacy going than that art is expression—an undertaking to tell all to the last scrapings of the brain pan”:

Having been born prior to Truman's "defeat" by Dewey, I know what you mean.

So, Lathem is the villain. I wondered whether it could have been a typesetter making corrections.

thanks for the information about Pritchard's work and the new LoA edition.

Mr. Lull: Thank you very much for visiting and commenting again.

And thank you as well for the link to Mr. Richardson's blog -- he has been on my "Blog List" for quite some time. His analyses of poems and poets are always rewarding. In addition to Frost (on whom he is an expert), his discussions of Hardy and Larkin (two of my favorites) are wonderful as well. I highly recommend a visit to The Era of Casual Fridays.

Thank you for visiting again, Fred. You've got me beat when it comes to being around for presidential elections, I'm afraid! (But not by much.)

Yes, the Library of America edition is definitely the way to go -- unless you already have the 1949 Collected Poems (which is what the LoA uses as its text, as well as the text of In the Clearing).

Pritchard is very good on Frost, as well as on everything else. In addition to his Frost book, his collections of essays and reviews are well worth tracking down.

I have the later edition with The Comma.

Has Lathem made other "improvements" that one should be aware of?

Fred: According to Pritchard's review of Lathem's edition, Lathem made numerous changes to Frost's puncuation throughout the poems. (This was noted by many other reviewers at the time as well.) In order to avoid Lathem's tinkering, it is best, as I noted, to either use the Library of America edition or the 1949 Collected Poems.

Thanks for the information. Xmas is coming, and I think the LofA edition would look great under the tree.

Fred: Yes, I think that is the best way to go. Plus, you will also get the prose as an added benefit.

A long-time admirer, first-time commenter. It's funny, the fragment, "The woods are lovely, dark and deep," has been tumbling about my head for the past several weeks, and in a very surprising, at least to me, connection: Flannery O'Connor. A recurring image in her short stories are dark, gloomy ominous woods. Places where extraordinary transactions occur. Thresholds. Transitions. That which is elsewhere. Cheers, Kevin

Kevin: Thank you very much for visiting and commenting, and for the kind words.

Thank you also for the thoughts about Flannery O'Connor -- it has been way too long since I have read her. You have created an urge in me to pull out her books -- not just the stories, but her wonderful letters in The Habit of Being as well.

About 25 years ago, I visited her house and farm in Milledgeville, Georgia. It was autumn at the time, but still leafy and beautiful. I cannot recall if there were any peacocks wandering around.

Well i am a great admirer of poems and artistic literature s. But what bothers me is that my interpretations can sometimes be so different than what the poem is trying to say. For instance in this poem, as we can extract the portion that says "Woods are lovely dark and deep". I thought that the loveliness it is mentioned here is probably not the wood it self but its' character. The character of supporting lives and forming homes to numerous.

Dolma Dorjee: thank you very much for visiting, and for your comment.

Of course, there is no "right" or "wrong" way to interpret a poem, and I suspect that Robert Frost would want the poem to have different meanings to different people. He was quite clever, as you know, in making his poems simple in language, but susceptible to different meanings. Thus, your view of the poem is perfectly valid.

Thank you again. I hope that you will return soon.

I had forgotten all about this post and the subsequent conversation. It was a pleasure to unexpectedly come across Frost this morning. "Stopping by Woods" always pleases, regardless of the number of times I have read it.

By the way, the LoA Frost did appear Xmas morning. I'm still dipping into it irregularly and discovering something new each time.

Fred: I'm pleased that you now have the LoA edition: it is definitely the way to go. Particularly, as I noted above, because of the added bonus of the prose.

Yes, "Stopping by Woods" is good to read at any time of year, isn't it? It's funny how in the middle of summer one might get in the mood to read dark winter poems -- or vice versa. Now, come to think of it, I wouldn't mind reading, say, "Desert Places."

Thanks again. I hope all is well.