It is time for a respite from "extinction's alp" (Philip Larkin) and the municipal bus ride to the River Styx (Norman MacCaig).  I am skeptical of utopias (philosophical, theological, political, artistic, or otherwise). However, I am willing to entertain any dreams that humanity may come up with.  (Unless those dreams involve telling other people how to live or what to do.  This, of course, disqualifies approximately 99% of utopian schemes.) For instance, I am willing to acknowledge (albeit reluctantly) that people are entitled to believe that "Imagine" is John Lennon's best song, and that it provides a possible blueprint for reality.  (I, on the other hand, would opt for "You've Got to Hide Your Love Away," "If I Fell," or a dozen or so other of his songs.)

Still, I am willing to give the dreamers a hearing.  Thus, I offer the following poems by A. S. J. Tessimond and Michael Hartnett. 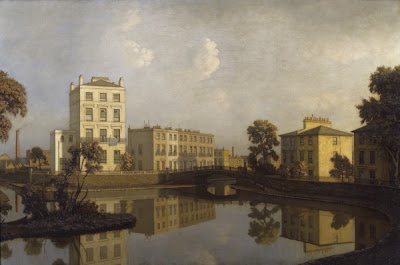 One day people will touch and talk perhaps easily,
And loving be natural as breathing and warm as sunlight,
And people will untie themselves, as string is unknotted,
Unfold and yawn and stretch and spread their fingers,
Unfurl, uncurl like seaweed returned to the sea,
And work will be simple and swift as a seagull flying,
And play will be casual and quiet as a seagull settling,
And the clocks will stop, and no-one will wonder or care or notice,
And people will smile without reason, even in the winter, even in the rain.

Algernon Newton, "Birmingham with the Hall of Memory" (1929)

There Will Be a Talking

There will be a talking of lovely things
there will be cognizance of the seasons,
there will be men who know the flights of birds,
in new days there will be love for women:
we will walk the balance of artistry.
And things will have a middle and an end,
and be loved because being beautiful.
Who in a walk will find a lasting vase
depicting dance and hold it in his hands
and sell it then?  No man on the new earth
will barter with malice nor make of stone
a hollowed riddle:  for art will be art,
the freak, the rare no longer commonplace:
there will be a going back to the laws.

Michael Hartnett, A Farewell to English (The Gallery Press 1978).

Shall we take Tessimond and Hartnett at their word?  Are they on the level? Perhaps Thomas Hardy, that old Pessimist, got it right in "The Oxen":

'In the lonely barton by yonder coomb
Our childhood used to know,'
I should go with him in the gloom,
Hoping it might be so. 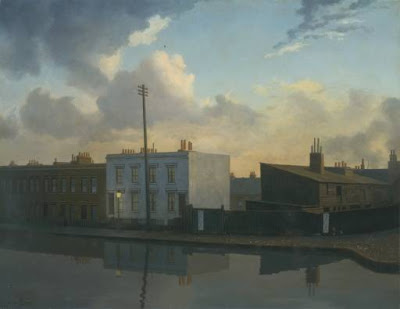 I'm with you in terms of skepticism of utopian dreams. Any society in with people "smile without reason" ought to be suspect; you have to wonder what they're putting in the water.

Dreams are dreams, and perhaps we need them to live.

But at the end, we need Hardy to bring us back.

Yet, even disbelieving, we still go to the stable, because hope is also important.

Chris: thanks for dropping by, and for the thoughts. I agree. And it is the society-wide utopia-peddling by those who believe that they are smarter than the rest of us that is scariest. Hence, the "smiles without reason." Thanks again.

Fred: like all of us, I am a lifelong daydreamer. And your point is a good one: there is a difference between dreams and hope.

Thank you for the thoughts. I always appreciate hearing from you.

The problem with giving dreamers an artistic hearing is that they tend to be sarcastic, as clearly at least one of these two choices are. Misery and uncertainty just make for better art I guess than the will to raise the human condition and spirit.

On the other hand, dreams of death as total extinction, for example, are also elaborate masks to disguise human ignorance, and artists are good at puncturing those kind of balloons when they're foisted upon them, for example John Lennon in "She Said She Said":

Stephen: pay no mind to my prior comment - I'm as clueless as the next guy. What I meant to say is perfectly expressed (no surprise) by a woman, Elizabeth Barrett Browning, in "Aurora Leigh," as she contemplates the apostle Peter's decsion to be cruxified upside down:

"For “tis not in mere death that men die most,
And, after our first girding of the loins
In youth’s fine linen and fair broidery
To run up hill and meet the rising sun,
We are apt to sit tired, patient as a fool,
While others gird us with the violent bands
Of social figments, feints, and formalisms,
Reversing our straight nature, lifting up
Our base needs, keeping down our lofty thoughts,
Head downward on the cross-sticks of the world.
Yet He can pluck us from that shameful cross.
God, set our feet low and our forehead high,
And show us how a man was made to walk!"

Sorry for the confusion.

Mr Sigler: I think that both comments are perfectly fine. I appreciate the references to "Aurora Leigh" and to "She Said She Said" (which would definitely be in my "dozen or so" Lennon songs that I would choose over "Imagine").

I always look forward to hearing from you -- thanks for visiting again.