In order to live well, we must come to terms with the fact of our own mortality.  Easier said than done, of course.  I can blithely write "come to terms with," which perhaps gives the impression that I know what I'm talking about -- that I know how to thread this needle.  But I can assure you that I know nothing whatsoever.

Earlier this week I spent half a day in a hospital for a routine diagnostic procedure.  The pre-procedure process involved lying alone on a gurney in a patient room after having an IV tube inserted in my arm.  I was told that I would have to wait twenty minutes for the procedure room to become available.  The lights were off.  I was quite relaxed.  But, as I looked up at the ceiling tiles and listened to the conversations taking place at the nurse's station, a thought occurred to me (a paraphrase):  "This is how my days may end.  Dusty ceiling tiles and strangers in conversation, day and night, out in an unseen hallway."

Here is a happier thought.

'Elizabeth the Beloved' --
So much says the stone,
That is all with weather defaced,
With moss overgrown.

But if to husband or child,
Brother or sire, most dear
Is past deciphering;
This only is clear:

That once she was beloved,
Was Elizabeth,
And now is beloved no longer,
If it be not of Death.

"Once she was beloved,/Was Elizabeth" is a lovely turn of phrase.  "And now is beloved no longer,/If it be not of Death" sounds like something that Edward Thomas might have written (and which, like Warner, he would have used to end a poem).  In fact, Warner wrote a poem in memory of Thomas, so there may be a subconscious influence at work. 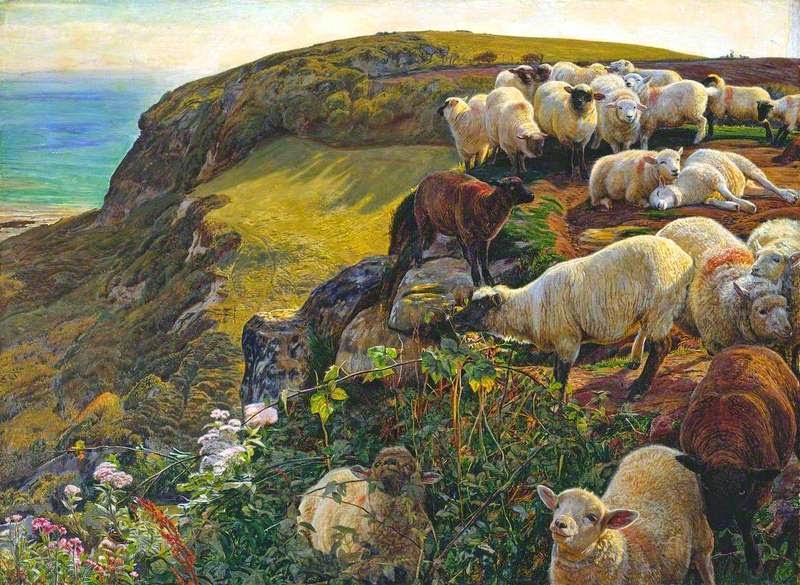 If one wishes to "come to terms with" one's mortality, graveyards are preferable to hospitals as places to collect one's thoughts on the matter.

The Old Graveyard at Hauppauge

In Adam's fall we sinned all,
and fell out of Paradise
into mankind -- this body of salt
and gathering of the waters,
birth, work, and wedding garment.

But now we are at rest . . .
Aletta and Phebe Almira,
and Augusta Brunce, and the MacCrones . . .
lying in the earth, looking up
at the clouds and drifting trees.

In the wake of the so-called Enlightenment, reason and rationalism are presumed to trump emotion and intuition.  However, when it comes to how to live (and how to die), a belief in the primacy of reason and rationalism (and in their noisome spawn, "Progress") is just as much an exercise in wishful thinking as is the thought (a lovely one, by the way) that those who have departed are "lying in the earth, looking up/at the clouds and drifting trees."  Reason and rationalism have nothing to do with what is humanly true. 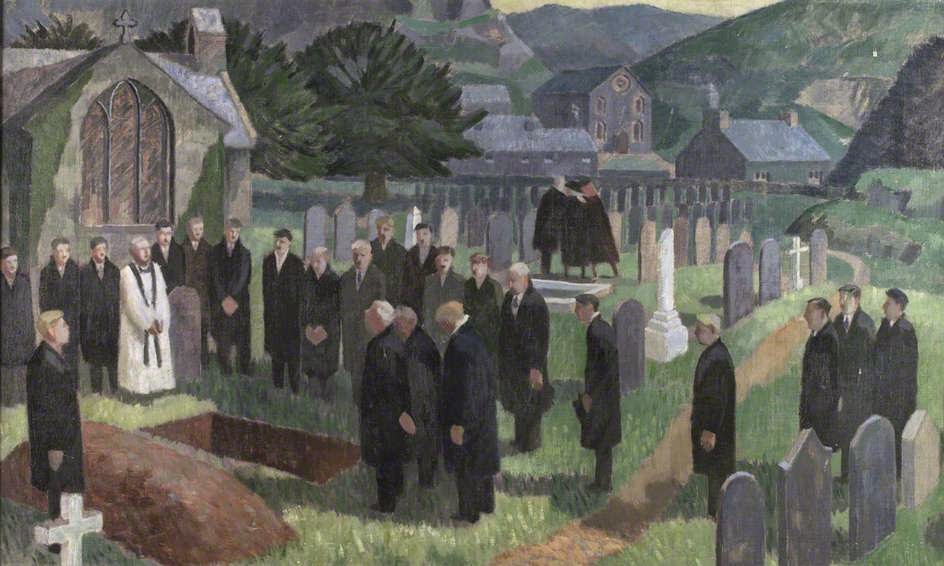 In attempting to "come to terms with" my mortality, I prefer to leave reason and rationalism out of account.  The fact of our death, and the way in which we live our life in light of that unchangeable fact, is a matter of emotion, intuition, and imagination, not of ratiocination and logic.

For instance, the following poem is, on its face, irrational.  How can someone speak from the grave?  How can a wood-dove mourn?  Yet the poem makes perfect sense to me.

Not long I lived, but long enough to know my mind
And gain my wish -- a grave buried among these trees,
Where if the wood-dove on my taciturn headstone
Perch for a brief mourning I shall think it enough.

Fortunately for us, reason and rationalism have absolutely nothing to do with the essence of poetry.  I agree with Edward Thomas:  the criterion for judging whether certain words placed in a certain order qualify as poetry is whether what the poet says "is true and not feigning."  Humanly true. 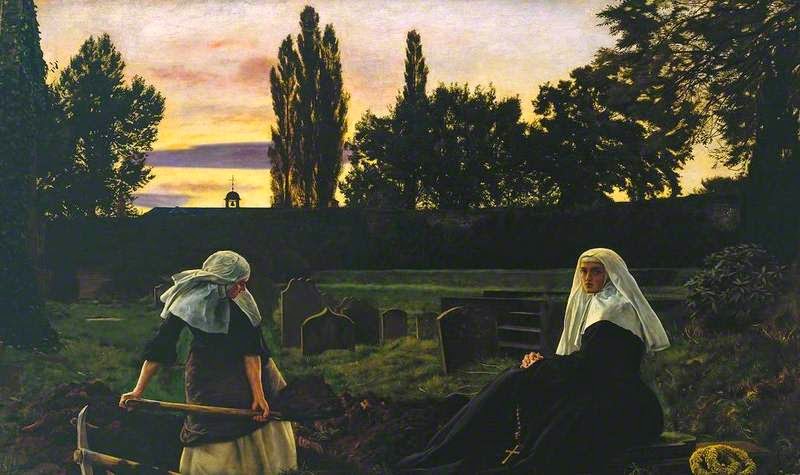 Ms. Greeley: Thank you very much for sharing Christina Rossetti's "The Bourne." It goes perfectly here. The final three lines are wonderful.

I should have thought to link to it in the post, since I posted it here back in June of 2013. As you know, Rossetti wrote a number of lovely poems along these lines. For instance, "Sleeping at Last," which concludes: "Under the purple thyme and the purple clover/Sleeping at last." Quite similar to "The Bourne," isn't it?

Thank you again for sharing this. As always, thank you for stopping by.

An interesting choice of poems, as always, and a link to a wonderful post on ET which I was unaware of until today. I have added Edna Longley's "A language not to be betrayed" to my ET wish-list. You never know, I may just come across it in Hay-on-Wye or an affordable copy on Abebooks!!

I've always enjoyed looking at gravestones, either with family history in mind, or just idly reading them.

Thank you for making my brain work again!

Bovey Belle: Thank you very much. I'm pleased you enjoyed the post.

I wouldn't be surprised if you could find a copy of A Language Not To Be Betrayed in Hay-on-Wye. I highly recommend it. As you know, Edna Longley has done wonderful service on behalf of ET, and this was the first book to collect a number of his fugitive critical pieces. You are probably aware that Oxford University Press is in the midst of publishing several volumes of ET's prose. However, they are (as is usually the case with university presses) exorbitantly-priced.

I too enjoy wandering through old graveyards. I think that I picked it up from my mother. On family trips out in the country in the Midwest and West when I was young she was always on the lookout for neglected cemeteries.

It is always nice to hear from you. Thank you for visiting again.

Edgar Lee Masters in his "Spoon River Anthology." a volume hardly read these days, has virtually everyone buried in the cemetery speak, all of those "sleeping on the hill." Masters was influenced by J. W. Mackail's "Selected
Epigrams from the Greek Anthology."

A poem that struck me deeply when I first read it years ago, when I was just a callow and unsifted lad taking up poetry, finding, to my surprise, that I had a powerful affinity for it, yes, a poem that stuck me then, one that still dreams itself into my memory, one that many years ago burrowed into my heart and took root there, is E.A. Robinson's sonnet "Amaryllis." A poem known to few, I'd wager.

Robertson, sadly in my view, is not read so much as he was decades ago. He deserves to be read. "The price of heartaches" Frost called Robinson.

I find his poem below captures the heartbreaking reality of life, encompassing love and death, and everything in between, containing those things that make us revel in life and those things that ravage our hearts.

I find it a memorable "cemetery" poem, though only one person lies in it.

I find it poignant that the poet, just out for a walk, can find his mind turned from progress and commerce--how unimportant they seem to him now--and find himself lonely and sad that a beautiful woman has grown old and died.

His seeing the old man standing over the grave of his beloved Amaryllis, illustrates to the poet the human condition distilled down to its essence. Do we need to know more of what it's like to be a human being? Perhaps so, but the sonnet tells me all I can bear to know right now.


Once, when I wandered in the woods alone,
An old man tottered up to me and said,
“Come, friend, and see the grave that I have made
For Amaryllis.” There was in the tone
Of his complaint such quaver and such moan
That I took pity on him and obeyed,
And long stood looking where his hands had laid
An ancient woman, shrunk to skin and bone.

Far out beyond the forest I could hear
The calling of loud progress, and the bold
Incessant scream of commerce ringing clear;
But though the trumpets of the world were glad,
It made me lonely and it made me sad
To think that Amaryllis had grown old.

Anonymous: Thank you very much for sharing your thoughts on the subject at hand, and for providing the connection with Masters. Mackail's Selected Epigrams is wonderful. I didn't know that it was an influence on Masters.

And thank you as well for "Amaryllis," which is new to me. It is lovely, and goes quite well here. I confess that I am one of those who has neglected Robinson's work (other than the standard anthology pieces, such as "Richard Cory" and "Miniver Cheevy"). This poem confirms that he, as you say, "deserves to be read."

Here's a Dickinson poem that seems to gather up the themes of your recent splendid posts and bundle them. It deals with birdsong, death, heartache. The last stanza is a wonderful piece of poetry--and how true, this paradox of our existence.

The saddest noise, the sweetest noise,
The maddest noise that grows, --
The birds, they make it in the spring,
At night's delicious close.

Between the March and April line
That magical frontier
Beyond which summer hesitates,
Almost too heavenly near.

It makes us think of all the dead
That sauntered with us here,
By separation's sorcery
Made cruelly more dear.

It makes us think of what we had,
And what we now deplore.
We almost wish those siren throats
Would go and sing no more.

An ear can break a human heart
As quickly as a spear,
We wish the ear had not a heart
So dangerously near.

Mr Floyd: As always, your selection of a poem by Dickinson is right on target. I agree that the poem fits well with the recent posts. But, more importantly, it is a wonderful poem that deserves our attention. "By separation's sorcery/Made cruelly more dear" and "We wish the ear had not a heart/So dangerously near" are particularly nice.

Thank you very much for sharing the poem, and for visiting again.