When I was growing up in Minnesota, we used to preserve fallen leaves by ironing them between two sheets of wax paper.  Otherwise, a saved leaf was likely to one day crumble to dust in your hands.

I remember searching for the "perfect" leaf to preserve.  Oak.  Elm.  Maple. Birch.

Where have all those wax-encased leaves gone to?  In a box or a scrapbook somewhere.  But where?

Green thoughts, the feel of pink -- remembered in the mind;
but those spring splendors, like dreams, are gone beyond recall.
The whole village in yellow leaves, I shut the gate, lie down --
once again the year is already deep into fall. 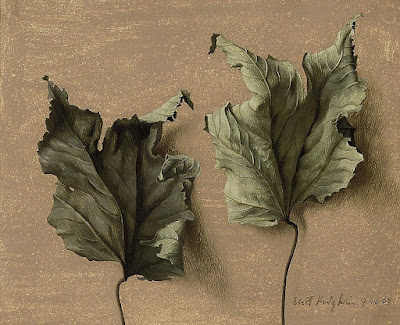 The fallen leaves are always reminding us of . . . something.  In the grand scheme of things, they whisper to us of transience and mortality.  No surprise there.  But they get more personal than that.  I suspect that most of us could trace a path back into our past leaf by leaf, if we wished.

Do you remember that day in the park, and the leaf that you saved so as to never lose the memory of that moment?  Who knows how far back we could go?

Between the visits to the shock ward
The doctors used to let you play
On the old upright Baldwin
Donated by a former patient
Who is said to be quite stable now.

And all day long you played Chopin,
Badly and hauntingly, when you weren't
Screaming on the porch that looked
Like an enormous birdcage.  Or sat
In your room and stared out at the sky.

You never looked at me at all.
I used to walk down to where the bus stopped
Over the hill where the eucalyptus trees
Moved in the fog, and stared down
At the lights coming on, in the white rooms.

And always, when I came back to my sister's
I used to get out the records you made
The year before all your terrible trouble,
The records the critics praised and nobody bought
That are almost worn out now.

Now, sometimes I wake in the night
And hear the sound of dead leaves
Against the shutters.  And then a distant
Music starts, a music out of an abyss,
And it is dawn before I sleep again.

The trees are nearly empty.  The wind and the rain have seen to that.  Now is when our companionship with leaves begins in earnest.  Call me sentimental (I am unapologetically guilty), accuse me of embracing the Pathetic Fallacy (guilty again), but, as the fallen leaves stroll with me down the street, the wind coming up from behind us, I cannot help but feel that we are in this together.

Lost in vacant wonder at how the months flow away in silence,
I sit alone in my idle hut, thinking endless thoughts.
An old man's cares, like these leaves, are hard to sweep away.
To the sound of their rustling I see autumn off once again. 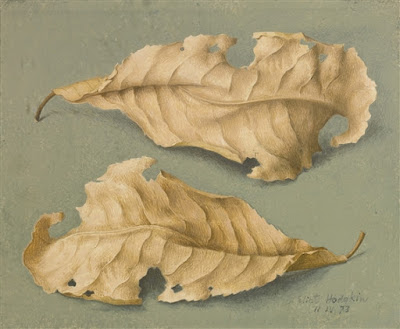 When it comes to leaves, and their place in our lives, a visit to Robert Frost is a necessity.  He knew a thing or two about this topic.  In his simple-sly way he says it all.

The same leaves over and over again!
They fall from giving shade above
To make one texture of faded brown
And fit the earth like a leather glove.

They must be pierced by flowers and put
Beneath the feet of dancing flowers.
However it is in some other world
I know that this is the way in ours.

"A crowd, a host, of golden daffodils . . . fluttering and dancing in the breeze."  (William Wordsworth, "I Wandered Lonely as a Cloud.")

The arc of our life is not complicated:  dancing flowers and fallen leaves. 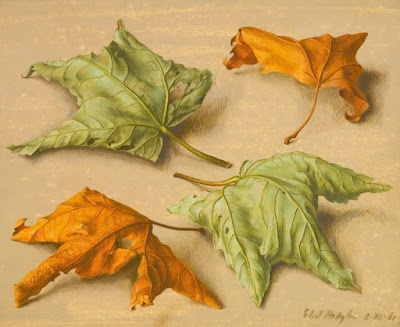 
There’s a certain Slant of light,
Winter Afternoons —
That oppresses, like the Heft
Of Cathedral Tunes —

Heavenly Hurt, it gives us —
We can find no scar,
But internal difference,
Where the Meanings, are —

When it comes, the Landscape listens —
Shadows — hold their breath —
When it goes, ’tis like the Distance
On the look of Death —
--Emily Dickinson

Now that the deciduous trees are shorn of their leaves, fallen to the ground, where they lie withered and sodden by the recent abundant rain; now that standard time has returned and the dark comes an hour earlier; now, we, some of us, as we cannot help doing, find ourselves watching with a vague sense of apprehension, twilight come.

The fast-fading light, darkness rushing in, reminds of something that, as Dickinson says above, "oppresses" us. This melancholy--November come and the leaves and the birds gone till spring--gives us "a Heavenly Hurt" in that most vulnerable part of ourselves: our sensibility and our imagination.

It leaves no external wounds: the meanings of things, the core of our lives, is irrevocably internal. The real changes in our lives occur "inside." That ephemeral "shaft of light" here in the middle of November, reminds us of what has come and gone.

The evanescent shaft of light in November possesses a divinity; it comes to us stamped with the seal of despair, a sorrow that we cannot banish, cannot teach. In truth, it is this divine despair, "an imperial affliction," that teaches us. And what does it teach.

When it comes the world seems to hold its breath, and when it goes the world looks as different as dead eyes do from live ones. A dark prophecy follows in the wake of short-lived November twilight: death lurks in the barely perceptible breeze that accompanies the fading of the light and the entrance of the night.

I love the Robert Frost poem, and thank you, Mr Pentz, for giving me a growing appreciation of things beyond my ken - Ishikawa Jozan's beautiful poems. I now know that he was a Samurai who became a monk - and a wonderful poet. It is good to learn.

Mr. Floyd: Thank you very much for the poem by Dickinson (as I have noted before, your knowledge of her poetry always results in your bringing us lovely and apt poems by her), and for sharing your own thoughts on these dark and darkening days of November. But keep good cheer! It is all quite beautiful, whatever it may portend, don't you think? As Derek Mahon says in "Everything Is Going to Be All Right": "There will be dying, there will be dying,/but there is no need to go into that."

As always, I greatly appreciate hearing from you. Thanks again.

Bovey Belle: I'm pleased that you liked the post. Thank you.

As for Ishikawa Jozan: the course of his life was not unlike that of a great many Japanese poets of earlier times: although they may not have been samurai, they often came from well-connected families that were close to those in power, and they often gave that life up, usually to devote themselves to Buddhism and/or poetry -- in short, a life of seclusion and contemplation. Admirable. And lucky for us.

I had forgotten about that method of preserving leaves, from my long-ago high school days. Thanks for the reminder and, again, for the lovely images and poems.

Goethe Girl: I'm happy to hear from you again. I'm pleased that you liked the post. Thank you very much for the kind words.

That memory of leaves and wax paper suddenly came back to me, I don't know why. When memories like that come back, it makes me wonder what else lies hidden that I cannot recall, but that only floats up on its own, unaccountably. I'm pleased that it brought back memories for you. I doubted my own memory, and had to check the Internet to make sure that we did indeed press leaves between wax paper "back in the old days."

As always, thank you for visiting. Please stop by again soon.