Some Trees Of Scotland And Japan

Trees are wonderful providers of perspective.  This past week, I have been preoccupied with various mundane errands and chores.  Then, a few days ago, I looked out into the backyard and noticed that the apple tree is now in full white bloom.  I thought to myself:  "When did that happen?  Where was I?"

On a day of almost no wind,
today,
I saw two leaves falling almost, not quite,
perpendicularly -- which
seemed natural.

When I got closer, I saw
the leaves on the tree were
slanted by that wind, were pointing
towards those that had fallen.

When I got closer than that, I saw
the leaves on the tree
were trembling.

And that seemed natural too.

As I have noted in the past, I have no objection to anthropomorphism in poetry.  I am completely comfortable with the Pathetic Fallacy as well.  This is especially true when it comes to trees.  We humans need all the resources we can muster in our futile attempts to articulate the beauty of these wondrous beings.  And, thankfully, we will only ever scratch the surface.

Take a good look:
even the blossoms
of the old cherry seem sad --
how many more times
will they see the spring? 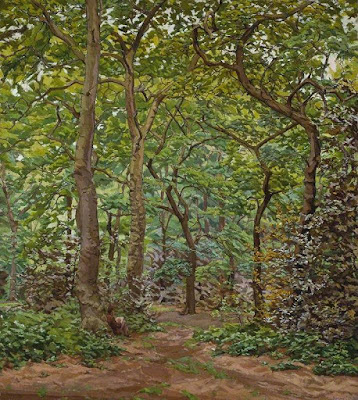 Science?  Botany?  They are of no account in this matter of trees.  The poems by Norman MacCaig and Saigyō that appear in this post are all about individual trees, not about "the tree" as a concept.  I understand the human compulsion to "explain" how the natural world works, and to classify everything in it.  But part of me doesn't see the point.

I am more sympathetic with, for instance, the Shinto belief that particular trees are sacred because they are inhabited by, or serve as a portal for, spirits (kami).  Shimenawa (ropes made of rice straw) are wrapped around such trees in order to notify people that they are approaching a sacred space.

The alder tree
shrivelled by the salt wind
has lived so long
it has carried and sheltered
its own weight
of nests.

I have been acquainted with the apple tree in the backyard for nearly 21 years.  I don't know how old it is, since it was here when I arrived.  Some of its branches are now lichen-covered.  At times I imagine that it is feeling a bit weary.  But year after year, following the dark and soaking winter, its magnificent cloud of white appears.  Perspective.

A seedling pine in the garden
when I saw it long ago --
years have gone by
and now I hear the storm winds
roaring in its topmost branches. 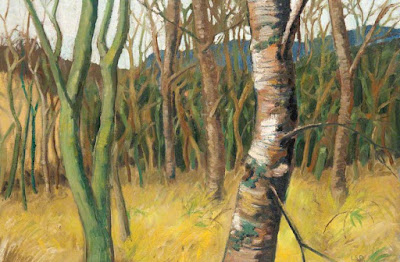 I received yet another gift earlier this week:  stepping outside the back door to open the mailbox, I suddenly smelled lilacs.  In addition to missing the blooming of the apple tree, I had also missed the blooming of the purple lilac tree that stands between two yew trees along the side of the yard.  Too much daydreaming and sleepwalking.

On that stormy night
a top branch broke off
on the biggest tree in my garden.

It's still up there.  Though its leaves
are withered black among the green
the living branches
won't let it fall.

Paying attention seems simple, but it can be difficult to do in a distracting world.  The media and entertainment and political worlds have no interest whatsoever in repose, reflection, or serenity.  Their stock-in-trade is agitation, restlessness, and empty desire:  a grasping that never ends.  All of these trees around us have no part in those worlds.  They gently shake us by the shoulders and say:  Wake up!

In a tree that stands
on the crag
by abandoned paddies,
a dove calling to its companion
in the desolate twilight. 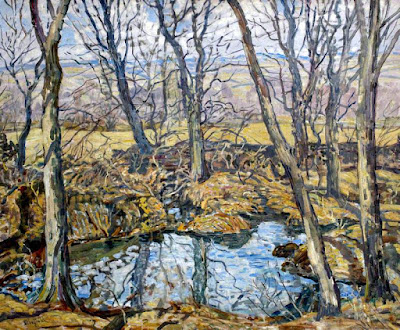 I harbor no illusions:  "beneath/[My] feet are implacable fate, and panic at night, and the strumble/Of the hungry river of death."  That is not going to change.  But these trees that all of us come to know along the way provide perspective.  There is a certain reassurance in their yearly rise and fall. Constancy within constant change.

I'm at ease in my crimson cluster.
The tree blazes
with clusters of cousins --
my cluster's the main one and I
am the important berry in it.

Tomorrow, or tomorrow's tomorrow,
a flock of fieldfares
will gobble our whole generation.

I'm not troubled.  My seed
will be shamelessly dropped
somewhere.  And in the next years
after next year, I'll be a tree
swaying and swinging
with a genealogy of berries.  I'll be
that fine thing, an ancestor.
I'll spread out my branches
for the guzzling fieldfares.

At some point, the apple tree, the lilac tree, and I will all be gone.  This makes perfect sense.

Live through the long years,
pine, and pray for me
in my next existence,
I who'll have no one
to visit the places I once was. 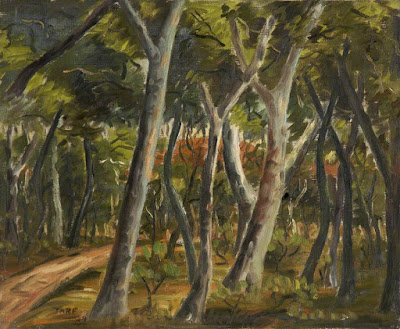 Some synchronicity. This morning I visited the Dulwich Picture Gallery in south-east London to see an exhibition of paintings by the Norwegian artist Nikolai Astrup. Here is his painting Apple Trees in Bloom. You can see anthropomorphism in Astrup’s painting A Morning in March, and how he was influenced by Japanese art in Maimåne.

Thank you for introducing me to Norman MacCaig. What a nice discovery

Graham: Thank you very much! Astrup's paintings are new to me: they are wonderful. I don't know how I have missed him all these years.

Thank you for the links to the paintings. I have since found others on the internet, including the lovely bonfire paintings and one titled "Foxgloves," which depicts two young women picking foxgloves in the midst of grove of birches (more beautiful trees). I will be exploring further.

zmkc: You're welcome. I'm pleased you liked the poems, and I hope you will explore his poetry further. He was quite prolific, so there are many gems awaiting you.

It's always nice to hear from you. As ever, thank you for visiting.

Just a brief comment to let you know how truly I enjoy coming here. Your excellent choice of poetry and paintings together with your very thoughtful comments are much appreciated.

Ms. Westerhout: I greatly appreciate your kind words about the blog. Thank you. I'm happy that you found your way here, and I hope you'll keep returning. Thanks again.

Mr Pentz, a world of coincidences, or so it would seem. Just this weekend I too visited the Dulwich Picture Gallery to see the Nikolai Astrup exhibition, which was quite simply stunning. An artist entirely new to me, but one whose paintings have left a very deep impression.I agree with you that Astrup's painting of the foxgloves was beautiful. There were in fact three slightly different versions of that painting in the exhibition.

For the last two weeks or so I too have been dipping in and out my volume of the poems of Norman MacCaig, another collection I never tire of with new delights to discover on each visit.
We had a beautiful plum tree on our allotment which each year had the most wonderful blossom. Sadly I had to cut it down last year as it had fallen prey to a disease which meant the fruit produced rotted on the branch before it was ripe enough to eat. Despite our best efforts we weren't able to stop the disease spreading and there was an increasing risk it would infect our apple tree too. I am very aware of its absence this Spring and miss it presence very much.

Thank you once again for these lovely poems. The last poem especially moving, I thought.
Mary

Mr Ashton: I envy you and Mr Guest: it looks like a wonderful exhibition. I did find out that an exhibition catalogue was published in March of this year, and I will be buying a copy. Alas, not the real thing, but the best I can do. It seems that he was unknown to a great number of people. But, better late . . .

I'm sorry to hear about your plum tree. I worry about my apple tree (and an old cherry across the path from it) also. Ah, well, change.

As always, thank you for your thoughts, and for stopping by.

Mary: Thank you very much. I'm happy you liked the poems.

Yes, the last poem is marvelous and moving, isn't it? If compelled to choose, I would probably select it as my favorite among the eight, although MacCaig's "In Memoriam" makes the choice difficult. But, of course, I am fond of them all.

It is always a pleasure to hear from you. Thank you for stopping by again. I hope you are having a wonderful spring.