As I have noted here in the past, a few times each year I feel the urge to visit the misty, twilit (at  all hours of the day) world of the poets of the 1890s. There is no telling when this urge will arrive.  It is purely a matter of emotion.  Thus, as summer begins, I find myself immersed in the dreamy, death-haunted, yellow-turning-to-grey world of the fin de siècle.  On this occasion, however, my return is not prompted by free-floating emotion, but by coming across this poem:

To leave a verse concerning the sad hour
That awaits us at the limit of the day,
To bind your name to its sorrowful date
Of gold and of vague shade.  That's what you wanted.
With what passion as the day drew to its close
You labored on and on at the strange verse
That, until the universe disperses,
Would confirm the hour of the strange blue!
I do not know if ever you succeeded
Nor, vague elder brother, if you existed,
But I am alone and want oblivion
To restore your fleeting shade to the days
In the supreme already worn-out effort
Of words wherein the evening may yet be.

I suppose that, from the standpoint of "literary criticism" (whatever that is), all of the poets of the Nineties (with the exception of W. B. Yeats) are "minor poets."  But the whole concept of "major" and "minor" poets is useless.  As you have heard me say before, dear readers, it is the poem that is important, not the poet.

Perhaps this is what Borges is trying to tell us, at least in part.  What matters is "the supreme already worn-out effort/Of words wherein the evening may yet be."  Are all of the poems written by "major poets" good? Of course not.  Are all of the poems written by "minor poets" bad?  Of course not.  And so-called "minor poets" have written poems that are as good as the best poems ever written by "major poets."  Using these sorts of labels encourages laziness and discourages expeditions of discovery. 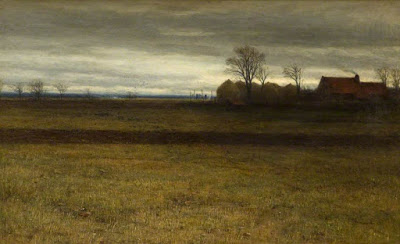 I suspect that some assiduous scholar has tracked down which "minor poet of 1899" Borges had in mind.  The poet may be Argentinian, not English.  I have not looked into that.  Moreover, knowing Borges, it is entirely possible that the "minor poet" is an imaginary poet.

In the absence of a name, I would like to share two poems published in 1899 by my favorite poets of the Nineties:  Arthur Symons and Ernest Dowson.  I believe that the poems capture the twilit atmosphere evoked by Borges in his poem:  "the sad hour/That awaits us at the limit of the day," the "sorrowful date/Of gold and of vague shade" and "the hour of the strange blue."  Symons and Dowson knew them well.

On Inishmaan
(Isles of Aran)

In the twilight of the year,
Here, about these twilight ways,
When the grey moth night drew near,
Fluttering on a faint flying,
I would linger out the day's
Delicate and moth-grey dying.

Grey, and faint with sleep, the sea
Should enfold me, and release
Some old peace to dwell with me.
I would quiet the long crying
Of my heart with mournful peace,
The grey sea's, in its low sighing.

"The grey moth night" has stayed with me since I first read the poem years ago.  When I come across four words such as these, I am reminded why I love poetry.  Beauty may be just around the corner.  And it will accompany you for the rest of your life. 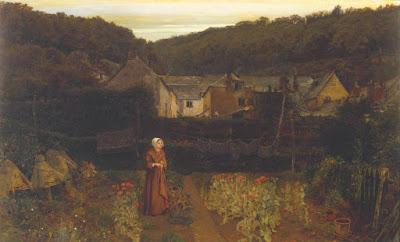 In the following poem, Derek Mahon evokes the preoccupation (or is it infatuation?) with death that is so prevalent in the poetry of the 1890s. Mahon's tone may seem a bit dismissive, but, overall, I think he feels an affinity with the poets.  This is more apparent in his later poem "Remembering the '90s," which appears in The Yellow Book (The Gallery Press 1997), a collection that borrows its name from the iconic quarterly magazine of the fin de siècle.

The Poets of the Nineties

Slowly, with the important carelessness
Of your kind, each spirit-sculptured face
Appears before me, eyes
Bleak from discoveries.

I had almost forgotten you had been,
So jealous was I of my skin
And the world with me.  How
Goes it with you now?

Did death and its transitions disappoint you,
And the worms you so looked forward to?
Perhaps you found that you had to queue
For a ticket into hell,
Despite your sprays of laurel.

You were all children in your helpless wisdom,
Retiring loud-mouths who would not be dumb --
Frustrated rural clergymen
Nobody would ordain.

Then ask no favour of reincarnation,
No yearning after the booze and whores --
For you, if anyone,
Have played your part
In holding nature up to art . . .

Be content to sprawl in your upland meadows,
Hair and boy-mouths stuck with flowers --
And rest assured, the day
Will be all sunlight, and the night
A dutiful spectrum of stars.

When the poem was first published in Mahon's Night-Crossing (Oxford University Press 1968), it was titled "Dowson and Company."  The lines "Be content to sprawl in your upland meadows,/Hair and boy-mouths stuck with flowers" bring to mind Dowson's "Breton Afternoon," which begins with this stanza:

Here, where the breath of the scented-gorse floats through the sun-stained
air,
On a steep hill-side, on a grassy ledge, I have lain hours long and heard
Only the faint breeze pass in a whisper like a prayer,
And the river ripple by and the distant call of a bird.

The fascination with "death and its transitions" noted by Mahon is reminiscent of the third stanza of "Breton Afternoon":

Out of the tumult of angry tongues, in a land alone, apart,
In a perfumed dream-land set betwixt the bounds of life and death,
Here will I lie while the clouds fly by and delve an hole where my heart
May sleep deep down with the gorse above and red, red earth beneath.

(A side-note:  Mahon writes of his own visit to Breton in a lovely four-poem sequence titled "Breton Walks," which may be found in Poems 1962-1978.) 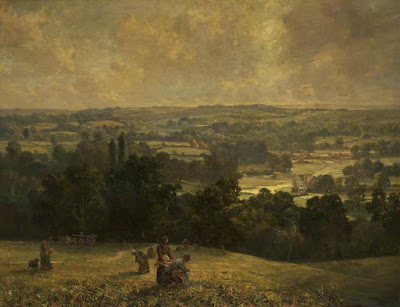 Ernest Dowson's final volume of verse was published in 1899.  He died the following year at the age of 32.  The volume closes with this poem:

Let us go hence:  the night is now at hand;
The day is overworn, the birds all flown;
And we have reaped the crops the gods have sown;
Despair and death; deep darkness o'er the land,
Broods like an owl; we cannot understand
Laughter or tears, for we have only known
Surpassing vanity:  vain things alone
Have driven our perverse and aimless band.

Let us go hence, somewhither strange and cold,
To Hollow Lands where just men and unjust
Find end of labour, where's rest for the old,
Freedom to all from love and fear and lust.
Twine our torn hands!  O pray the earth enfold
Our life-sick hearts and turn them into dust.

Dowson wrote what is perhaps the quintessential poem of the Nineties: "Vitae summa brevis spem nos vetat incohare longam," which has appeared here on more than one occasion.  The poem ends with these lines:

Out of a misty dream
Our path emerges for a while, then closes
Within a dream.

It has always been thus.  The poets of the Nineties have said these things as well as they have ever been said.  There is nothing new under the sun, but we need poets to tell us these things in their own fashion, whatever their time and wherever their place.  To return to Borges:  "the supreme already worn-out effort/Of words wherein the evening may yet be."  "Worn-out?"  I wonder.  Restated, perhaps.  And timeless.

That man's life is but a dream --
is what we now come to know. 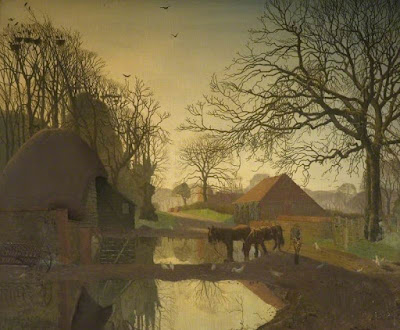 This week I was reading a chapter of Friedell's cultural history called "The Invention of Antiquity". After some pages of remarks on how and why the writers of the Enlightenment badly misunderstood the Greeks, Friedell goes on to say that the Greeks had a classical and orderly art, yet their world was anything but classical and orderly; and indeed not "yet" but "because". This leads to the remark that nobody reading Ibsen, Maeterlinck, etc., would imagine that they wrote in a time of industrialization and rule by the stock exchanges.

I don't think that any writer need feel responsible for capturing all the characteristics of his time, and melancholy and death and its expectation certainly are present in any age we know of. Still, I think we use the word "minor" with a view to how small a canvas and range of colors the artist chooses to work with.

George: It's nice to hear from you again. Thank you for your thought-provoking comment. I'm afraid we will have to respectfully agree to disagree about the use of "minor" in connection with poets (or any other creator of art). I don't find the word helpful. I think that the use of terms like "major" or "minor" is part of the inevitable human urge to categorize and oversimplify, which, in the case of poetry (or any other art) detracts from focusing upon the individual work of art. But that's just my humble opinion.

that last poem was a "Tanka", kind of an extended Haiku... in old Japan, poets used to sit around having tea parties and challenging each other to invent new and appropriate Haiku and Tanka, spinning off of one another far into the night; a few of the long sequences have been preserved and demonstrate extraordinary inventiveness... at any rate, lovely poetry you cite; very nice to read...

Mudpuddle: Thank you for the kind words about the post. I'm happy you liked the poems.

Sōgi, as you probably know, is well-known for his participation in renga (linked-verse sequences). A one-hundred verse sequence that he participated in appears at the end of his travel journal "Shirakawa Kikō" ("Record of a Journey to Shirakawa"). The journal and the entire sequence are translated by Steven Carter in "Sōgi in the East Country: Shirakawa Kikō," Monumenta Nipponica, Volume 42, No. 2 (1987). As you also probably know, Bashō often participated in the writing of renga. Two 36-verse renga in which he participated ("A Winter Shower" and "The Summer Moon") have been translated by Makoto Ueda, and may be found in his book Matsuo Bashō (Twayne 1970; republished by Kodansha in 1982). Bashō also participated in a 36-poem sequence titled "Hatsushigure" ("First Winter Shower"), a translation of which appears in Etsuko Terasaki, "Hatsushigure: A Linked Verse Series by Bashō and His Disciples," Harvard Journal of Asiatic Studies, Volume 36 (1976). You may already be aware of these translations, but, if not, the Carter and Terasaki translations may be accessed through JSTOR.

I agree with you that renga are well worth seeking out. They are a unique form of art.

Thank you for visiting again, and for sharing your thoughts.

tx for the updates... i have the ueda; will look into the others...

Mudpuddle: Thank you for the follow-up comment. I mentioned the items in the journals because (1) very little of Sōgi's work has been translated, and (2) despite how well known he is, a fair amount of Bashō's work is still not translated. Thanks for stopping by again.