The world is perfect just as it is.  I would not change a thing.  We dwell in Paradise.  I am reminded of this each day when I take my afternoon walk.

Of course, Paradise is in a constant state of change.  And, as for you and me, our time in Paradise is short.  This is something that takes getting used to.  Encountering a lovely distant prospect (the waters of Puget Sound stretching away towards the Olympic Mountains) or a local miracle (the swallows diving and curving above the wild grasses in a meadow), my desire is to freeze things in place, to somehow make the moment eternal. "He wanted to feel the same way over and over.//He wanted the river to go on flowing the same way,/To keep on flowing." (Wallace Stevens, "This Solitude of Cataracts.")  Not in this world.  Otherwise, where would beauty have its source?

Hence, transience is a given.  But I cannot escape the feeling that there is something else afoot.  The world seems to be saying something.  It seems to have a life of its own.  This is where one enters the realm of ineffability. Here is one way of putting it:  "One feels the life of that which gives life as it is."  (Wallace Stevens, "The Course of a Particular.")  Or, consider this:

"To every Form of being is assigned,"
Thus calmly spake the venerable Sage,
"An active Principle: -- howe'er removed
From sense and observation, it subsists
In all things, in all natures; in the stars
Of azure heaven, the unenduring clouds,
In flower and tree, in every pebbly stone
That paves the brooks, the stationary rocks,
The moving waters, and the invisible air.
Whate'er exists hath properties that spread
Beyond itself, communicating good,
A simple blessing, or with evil mixed;
Spirit that knows no insulated spot,
No chasm, no solitude; from link to link
It circulates, the Soul of all the worlds." 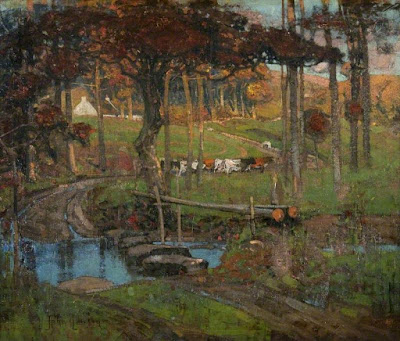 "Spirit that knows no insulated spot,/No chasm, no solitude; from link to link/It circulates, the Soul of all the worlds."  This possibility seems perfectly reasonable and congenial to me.  Can it be proved?  Of course not. But here is the marvelous thing:  it can never be disproved either, no matter how many scientists and philosophers and theologians are brought to bear on the proposition.  It is a possibility that lies beyond their limited areas of competence.  They cannot touch it.

Rather, it is a matter of human truth and poetic truth.  It is also a matter of deciding whether one wishes to live in a disenchanted world or in an enchanted world.  I've never been fond of the so-called "Age of Enlightenment" and the putative "triumph" of Reason, Science, and Progress.  We all know how well that has worked out.  I prefer the notion of "the Soul of all the worlds" circulating around me.

The Sense of the Sleight-of-Hand Man

One's grand flights, one's Sunday baths,
One's tootings at the weddings of the soul
Occur as they occur.  So bluish clouds
Occurred above the empty house and the leaves
Of the rhododendrons rattled their gold,
As if someone lived there.  Such floods of white
Came bursting from the clouds.  So the wind
Threw its contorted strength around the sky.

Could you have said the bluejay suddenly
Would swoop to earth?  It is a wheel, the rays
Around the sun.  The wheel survives the myths.
The fire eye in the clouds survives the gods.
To think of a dove with an eye of grenadine
And pines that are cornets, so it occurs,
And a little island full of geese and stars:
It may be that the ignorant man, alone,
Has any chance to mate his life with life
That is the sensual, pearly spouse, the life
That is fluent in even the wintriest bronze.

"As if someone lived there."  That is what I have in mind.  "Life/That is the sensual, pearly spouse, the life/That is fluent in even the wintriest bronze." In other words, a world that is enchanted. 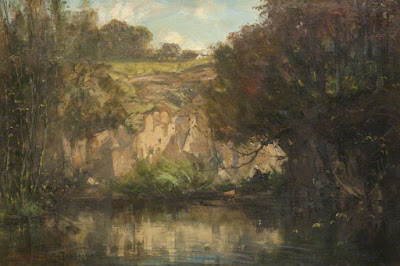 From July of 1797 until July of 1798, William Wordsworth and his sister Dorothy lived at Alfoxden House in Somerset.  Samuel Taylor Coleridge lived nearby.  During this time, Wordsworth was immersed in writing the long multipart poem which bore the overall title of "The Recluse."  The poem proceeded by fits and starts and in many permutations:  "The Excursion," "The Ruined Cottage," "The Pedlar," "Home at Grasmere," and "The Prelude" are all predecessors or portions of it.

A manuscript notebook (now known as "the Alfoxden notebook") survives from that period.  It contains fragments of blank verse that reflect Wordsworth's preoccupation with "the Soul of all the worlds."

The lines "bound/Together by a link, and with a soul/Which makes all one" echo "from link to link/It circulates, the Soul of all the worlds" in the passage above from "The Excursion."  Thoughts such as these are dismissed by ironic moderns as a quaint form of outmoded pantheism.  The modern mind is actually quite limited in the scope of what it deems to be acceptable thought.  It has no idea of what to make of lines such as these:

Here is another lovely fragment:

These populous slopes
With all their groves and with their murmurous woods,
Giving a curious feeling to the mind
Of peopled solitude.

"Peopled solitude" is a wonderful phrase.  As is "murmurous woods."  (An instance of inarticulate language on the part of the world, I would suggest.) Those who are not fond of Wordsworth have little time for this sort of thing.  I will not argue the point.  I will only say that Wordsworth was onto something that is neither outmoded nor quaint.  The possible world that he describes has not been replaced or superseded by the newer, ironic world. 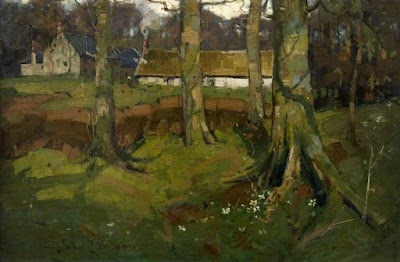 For all of its soi-disant "freedom," "openness," and "progressivism," the modern world is in fact alarmingly (and risibly) narrow-minded.  This is not a political comment.  (I have no interest in politics.)  Nor is it a theological comment.  Rather, it is a comment on the limited range of possibilities that most moderns are content to live with.

Poets such as William Wordsworth and Wallace Stevens shake us by the shoulders and say:  Look, there is something you are missing.  There is more to the world, and to your life, than meets the eye.  They expand the range of possibilities.  They open vast territories that would otherwise be beyond our ken.

It was not from the vast ventriloquism
Of sleep's faded papier-mâché . . .
The sun was coming from outside. 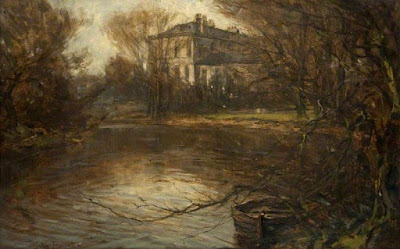 Apropos of not much, your introductory remarks remind me of my time living in Port Orchard WA; my memory still contains special recollections of my occasional walks on the shoreline, daily transits on the ferry to Bremerton, a few voyages to Victoria BC, and miles of driving through the Paradise beyond Silverdale. Pondering Wordsworth's daffodils, your posting, and meanderings through my Swiss-cheese memory of Puget Sound have made this morning special. Thanks!

R. T.: I'm pleased the post evoked happy memories of your time out here. You have commented here before that you did not necessarily enjoy your time at sea, but the Navy certainly has a large number of attractive stations. It is beautiful out on the Olympic Peninsula. As you know, there is still a Navy presence in Bremerton, as well as at the nearby submarine base in Bangor. Looking out my front window, I occasionally see Navy vessels on Puget Sound heading to or from Bremerton, even an aircraft carrier now and then. I also remember seeing the USS Missouri being towed out of Puget Sound to its final destination in Hawaii.

Yes, Bremerton was the reason for my Puget Sound period way back in the late 70s. Jeez, that is a long time ago. But I did like Port Orchard in spite of having to work on a ship in the shipyard at Bremerton. Everything other than Bremerton, the dark cloud, was the silver lining. I even liked Seattle -- some of it.

R. T.: Thank you for the follow-up thoughts. I have only been to Bremerton a few times, but it has its charms. I imagine it has changed a great deal since you were there, as you might expect. Thanks for stopping by again.