Autumn simplifies things.  It reminds us of that which is elemental and essential in the World, and in our life.  This is good, since existence is not as fraught with complication as we think it is.

The prevailing culture tries to convince us that certain things are important, and deserve (nay, require) our attention.  Nearly all of these things are of no account, and may be completely disregarded.  Thus, for instance, as a native of this fair and wonderful land I am exercising my freedom by ignoring the current presidential election.  I have assiduously avoided hearing even a whisper of the goings-on.  Of course, I know who the two candidates are (in this day and age, some snippets of information always leak through), but why should I devote a single moment of thought or emotion to either of them?

This is not a political statement, for I have no interest in politics.  Nor am I denigrating those who find the election important.  I expect that some of you who are reading this are appalled at my disinterest.  Please be assured that this is not a matter of me feeling superior to those citizens who participate in the process.  You will have to take me on my word that I am neither supercilious nor cynical.  But, for me, it is a very simple proposition: why should I let either of those people into my life in any way, shape, or form?

Look outside.  The leaves are falling.

Earlier this week, after a two-day spell of rain, the sky cleared in the late afternoon.  Cast upon the damp and dark paths,  fallen leaves (brown, orange, and yellow in all their variations) glittered, lit by the declining sun. 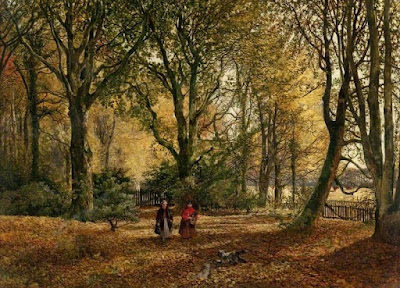 The haiku that appear in this post are ones that I visit each autumn. Although I have been returning to them for years, and by now know them by heart, they remain fresh.  The comparison is inexact (works of art being one step removed from the particulars of the World), but the thought occurs to me:  are the leaves of autumn any less brilliant, any less beautiful, because we have seen them before?

Blown from the west,
fallen leaves gather
in the east.

The grass of lawns and of fields in parks, having been browned by the summer sun, is turning green again with the arrival of the autumn rains. Palls of bright leaves are spread across deep green.  Soon only the grass will remain.

"How the yellow, pink or purple leaves released suddenly, one by one, at almost regular intervals, falling silently and serenely, magnify the light. We are not capable of this." 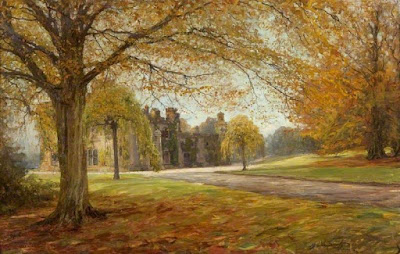 This past week, on two separate occasions, I watched caterpillars (one black and tan; one black) cross the path in front of me.  I felt charmed and grateful for having encountered them.  Moreover, they served as a reminder that I am always in need of:  Pay attention!

Ryōkan (translated by John Stevens), in John Stevens, One Robe, One Bowl: The Zen Poetry of Ryōkan (Weatherhill 1977), page 67.

Caterpillars and human beings:  each of us in the midst of our own singular journey, crossing a brief, bright space from one dark wood to another.

Am I oversimplifying?  Anthropomorphizing?  Sentimentalizing?  If you spend time with the haiku of the masters (Bashō, Buson, Issa, and Shiki), you will soon become intimately acquainted with the lives and fates of fireflies, cicadas, spiders, fleas, mosquitoes, flies, caterpillars, and butterflies (to name but a few).  You will come to realize that, in this existence of ours, notions of oversimplification, anthropomorphization, and sentimentality are beside the point.  You will learn to banish modern irony from your life.

"Autumn trees:  as if covered with yellow and white butterflies." 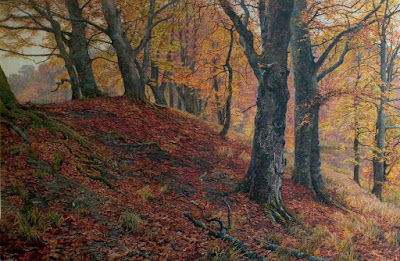 From a caterpillar in autumn to a butterfly in spring.  Is this what autumn's poignant mix of sadness and exhilaration is telling us?

"Continually regard the World as one living thing, composed of one substance and one soul.  And reflect how all things have relation to its one perception; how it does all things by one impulse; how all things are the joint causes of all that come into being; and how closely they are interwoven and knit together."

How does one incorporate this sort of perspective into one's own life?  A difficult task.  But think of this, for instance:  the seasons will continue to come and go long after we have returned to dust.  This can be a calming realization.

Wistfulness amid beauty.  Is this a unique autumn state of mind?  I used to think so, but now I'm not so sure.  This seems to be the way the World works.  For which we should be grateful.

"This unexpected gift of a tree brightened by the low sun at the end of autumn, as when a candle is lit in a darkening room."

Philippe Jaccottet (translated by John Taylor), from "Notes from the Ravine," in Philippe Jaccottet, And, Nonetheless: Selected Prose and Poetry 1990-2009 (Chelsea Editions 2011), page 343. 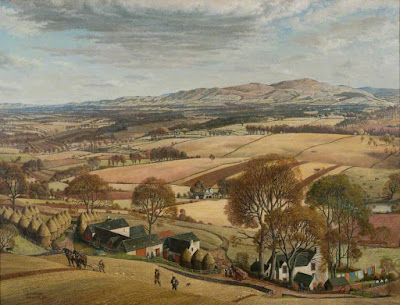 Mr Pentz, Spring has always been in some ways my favourite season, though as I'm getting older I have developed a greater fondness for Autumn. Perhaps as you say it reminds us of what is essential in life. I agree with you about the noise and fuss attending so much of what goes on in the world, and like you I strive to keep it out of my world as much as possible.
We have been fortunate in having some glorious autumn days of blue skies and very warm weather, though very cold nights. Working on my allotments I'm amazed by the persistence and resilience of weeds flourishing, casting a late bloom of green across the earth now that most of the crops have come to an end. Yesterday I watched a couple of late bumblebees visiting our border of French marigolds,and as I have been in the process of moving an old compost heap and establishing a new one I have been working in close proximity to earthworms, millipedes, snails and woodlice among myriad other creatures who you come to realise make and replenish this world about us, silently and largely unsung, and might I add without any fuss at all! I've become more aware working close to the earth how much it has altered my perspective. Not only will the seasons come and go, for a long time to come, hopefully, but they will do so with the help of these tiny creatures and not us.
Thank you for the wonderful haiku of Issa and Ryokan, and the words of Marcus Aurelius which are wonderful.

John: It's very nice to hear from you. I hope that your recovery from your illness is going well. It sounds as though it is, given that you have been able to spend some time in your allotments.

I don't work with the earth in the way you do, and thus, as I said in the post, I need to constantly remind myself to pay attention to what is going on around me, including on the ground. Seeing the caterpillars that I mentioned in the post, I realized how often I tend to be daydreaming or sleepwalking my way through the world. The time you spend in your allotments brings you much closer to these things than I ever get. I'm pleased to see you mention the late bumblebees. A couple of weeks ago, I saw a few of them hovering at the last of the wild flowers in a meadow. I'm afraid they are gone now (both bees and flowers).

Again, I hope that your recovery is going well. As ever, thank you very much for visiting, and for sharing your thoughts.

still, walking in woods, the tenuous cobwebs brush my face...

Mudpuddle: Very nice. Thank you. I'm reminded of one of my favorite waka by Saigyō (translated by Burton Watson):

Stephen, I thought as we had been corresponding for some time that perhaps we might use first names.I hope that is acceptable to you.
Recovery from my illness is going well, though I'm not entirely out of the woods yet. I am back to work at the university. The one saving grace throughout has been that I have remained physically fit enough,apart from the problems with my chest and throat, to be able go outside and walk and potter about at my allotment. A gift of immeasurable worth and it has been the one thing that prevented me from slipping into a state of depression at times. Thank you for your good wishes.

John: Thank you very much for your follow-up thoughts. (By the way, first name basis is fine with me.) I'm sorry to hear you are not completely back to normal yet, but it is good to hear that you are making enough progress to return to work and (more importantly!) to spend time outside. I'll be looking forward to hearing more good news. In the meantime, I wish you well as you move forward. Take care.

Thank you for this beautiful post. I, too, love autumn the best. The fallings of fall. It's taken me a week to read this because "getting and spending" and thinking about politics I've laid waste my powers.

Natalie: Thank you very much for your kind words about the post. I know the feeling of "getting and spending" and "lay[ing] waste our powers" -- Wordsworth has been telling us this for over 200 years now, and we still struggle every day to escape. "The world is too much with us" indeed. Which is why politicians are no longer part of my life -- I'm hoping, I suppose, for "glimpses that would make me less forlorn." "Forlorn" is how I would feel should I turn my attention to politics.

As ever, thank you for visiting, and for sharing your thoughts.