Is there anything as peaceful and as pleasurable as the soft buffeting of a warm wind in your ears as you walk abroad on a sunny day?  A steady, yet gentle and enfolding, wind.  A blue and gold day in late spring, summer, or early autumn.  There is no reason to pine for a future Paradise:  we abide within it now.

Late in his life, A. E. Housman declared:  "In philosophy I am a Cyrenaic or egoistic hedonist, and regard the pleasure of the moment as the only possible motive of action."  A. E. Housman, letter to Houston Martin (March 22, 1936), in Archie Burnett (editor), The Letters of A. E. Housman, Volume II (Oxford University Press 2007), p. 528.  "In a world of steel-eyed death and men who are fighting to be warm," there is something to be said for Housman's philosophical inclinations.  The word "hedonism" has taken on a pejorative cast in modern times:  it has come to imply licentiousness or immorality.  But, after all, it simply means (according to The Oxford English Dictionary) "the doctrine or theory of ethics in which pleasure is regarded as the chief good, or the proper end of action."

When it comes to the beautiful particulars of the World, I am an unapologetic hedonist.  But I would hope that my pleasure is not "egoistic" (or "egotistic" either).  And I do my best (subject to constant failure) to combine my pleasure with gratitude.

Hence, for instance, the wind.

Often I've heard the Wind sigh
By the ivied orchard wall,
Over the leaves in the dark night,
Breathe a sighing call,
And faint away in the silence,
While I, in my bed,
Wondered, 'twixt dreaming and waking,
What it said.

Nobody knows what the Wind is,
Under the height of the sky,
Where the hosts of the stars keep far away house
And its wave sweeps by --
Just a great wave of the air,
Tossing the leaves in its sea,
And foaming under the eaves of the roof
That covers me.

And so we live under deep water,
All of us, beasts and men,
And our bodies are buried down under the sand,
When we go again;
And leave, like the fishes, our shells,
And float on the Wind and away,
To where, o'er the marvellous tides of the air,
Burns day. 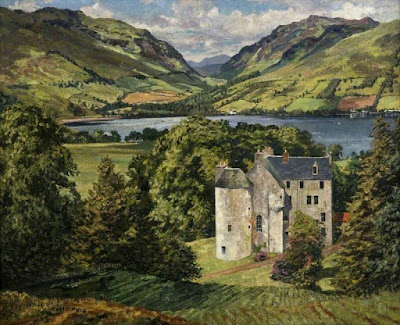 But hedonism remains at the surface of things.  Whereas, as de la Mare says, "we live under deep water."  This is where immanence comes in: glimmers and glimpses and inklings of something within, behind, and beyond all of those beautiful surfaces.

One either has this sense of the World or one does not.  I do not say this in a judgmental fashion, nor do I claim that those who have this sense are "wiser" or more "enlightened" than those who do not.  How we find ourselves in the World is, for each of us, a matter of mystery.  It is not a case of true or false or of right or wrong.

De la Mare again:  "Nobody Knows."  Exactly.  No explanations are necessary.  Nor are they forthcoming.  We should leave it at that.

In the meantime, we have the wind.  And poems about the wind.

"Providence" feels like a haiku:  a report on experience.  (To borrow from Edmund Blunden.)  However, a word such a "providence" would likely be avoided by a haiku poet.  Too subjective.  Of course, I am completely open to the possibility that what the wind does may well be "providence":  I am not in any way criticizing Hewitt's use of the word.

Enough of that.  I do not wish to create the impression that I am quibbling about "Providence":  I think it is a lovely poem.  As is this, another poem about the wind of Ireland.

This wind that howls about our roof tonight
And tears live branches screaming from great trees
Tomorrow may have scarcely strength to ruffle
The rabbit's back to silver in the sun. 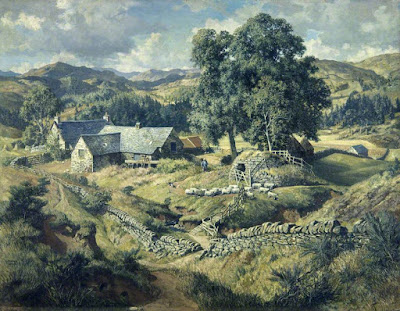 Of course, poets cannot help but bring humans into their apostrophes about the wind.  Thus, for instance, they say that the wind "sighs" or "moans" or "cries."  This is to be expected.  All poetry, all art, is an attempt to place ourselves into the World in the hope of making sense of things, however briefly.  It is not surprising that, in doing so, we see ourselves (or come upon ourselves) in the World.

Moreover, we mustn't forget that the beautiful particulars of the World include human beings.  The wind.  People.

But we mustn't go too far.  Despite the pretensions of the so-called "Age of Enlightenment" (also, risibly, known as "the Age of Reason"), we are not the measure of the World.  Our conceit may be boundless and shameless, but we are not in a position to make claim to the wind.

This past winter and spring have been, even for this damp part of the world, unseasonably rainy.  As a consequence, the wild grasses in the meadows are more than four feet tall in places, taller than I have ever seen them.  As I pass by them on a breezy day, I am inclined to think that they are whispering as they sway, falling and rising, in the wind.  But the beauty of that sound has absolutely nothing to do with the name I place upon it.

-- Love of God is love of self.
The stars and the seas are filled by precious I
Sweet as a pillow and a sucked thumb.

-- It would be most unflattering for adoring men
If the grasshopper chirping in the warm grass
Could glorify that attribute called Being
In a general manner, without referring it to his own persona. 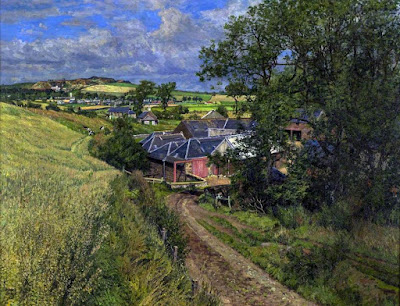 As I suggested here recently, wisdom does not necessarily come with age.  I can attest to that.  But growing old does provide an opportunity to pare your life down to essentials.  Think of all the things you once thought were important and that now mean nothing.  The length of that list will depend upon the length of your time upon the earth, dear reader.

One day you will realize, out of the blue, that you have lived more years than the number of years that remain to you.  On that day, life becomes simpler.  You may turn your attention to the wind.

Cathedral of my enchantments, autumn wind, I grew old giving thanks. 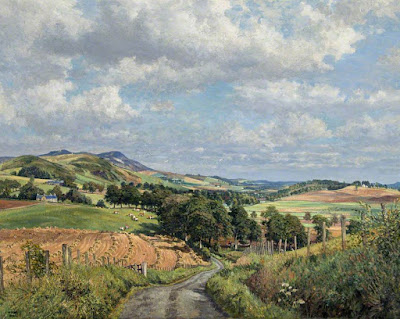 Says Emily Dickinson, who by her own admission sees the world "New Englandly," about the mysterious south wind (and all it can conjure in her mind)on her northern imagination:

A South Wind—has a pathos
Of individual Voice—
As One detect on Landings
An Emigrant's address.

A Hint of Ports and Peoples—
And much not understood—
The fairer—for the farness—
And for the foreignhood.

Thank you for another beautiful post Stephen. Here in Scotland we are very familiar with the wind! I wanted to add to your poetry a delightful verse by A A Milne called Wind on the Hill. This is the wind from a child's perspective. He understood the world of children so well. I think it begins. 'No one can tell me, Nobody knows, Where the wind comes from, where the wind goes.'

THis is a lovely post, words and pictures. thanks.

Anonymous: Thank you for sharing Dickinson's poem, which is lovely. The wind's voice is a perennial subject for poets, isn't it? Wallace Stevens's "To the Roaring Wind" comes to mind:

What syllable are you seeking,
Vocalissimus,
In the distances of sleep?
Speak it.

Dickinson's "a pathos/Of individual Voice" is wonderful, as is: "And much not understood." As you suggest, there is a mystery at the heart of the wind: "Nobody Knows."

Ms. Hay: Thank you very much for the kind words about the post, and for the reference to Milne's poem, which is new to me. I found it on the internet after reading your comment: it is lovely. It's wonderful that both Milne and de la Mare used the phrase "nobody knows" in connection with the wind. I should have mentioned in the post that de la Mare's poem appeared in one of his books of "children's verse." But I've always felt that de la Mare's "children's verse" is perfectly suitable for adults. I think the same is true of "Wind on the Hill." Another poet of whom this may be said is Christina Rossetti, in her Sing-Song: A Nursery Rhyme Book. And it now occurs to me that this is also true of Robert Louis Stevenson's children's verse.

As for the wind of Scotland: I have only been to Scotland once, but I do recall fondly the winds of the Isle of Skye, on one bright blue and gold autumn day in particular. And wind is often present in the poems of my two favorite Scottish poets: George Mackay Brown and Norman MacCaig.

hart: You're welcome. Thank you very much for the kind words. I'm pleased you liked the post. I'm fond of these poems and paintings, so it is gratifying to find that they may resonate with others as well.

Thanks again, and please return soon.

Hello there, I really love the poems you choose,and also the paintings throughout this wonderful post, every time I visit I am uplifted.
Ah..in one of the comments you mention Norman MacCaig, I have his poetry book beside me now, and recently I saw a documentary with Billy Connolly who was a friend of Mr MacCaig. Billy and some other friends went on a fishing trip up in the Highlands as a memorial to Norman.

Jane: I greatly appreciate your kind words. Thank you very much. And thank you for the reference to the MacCaig documentary, which I was not aware of. I will try to track it down. You've also reminded me that it is time to revisit his poems!

You have given here in a few paragraphs and pictures, enough for my soul to ruminate on -- and be nourished by -- for the remainder of my earthly life! Thank you for your loving creations.

GretchenJoanna: That's extremely nice of you to say -- thank you very much. I'm fond of the poems that appear in the post, particularly de la Mare's "Nobody Knows." They all seem to get to the heart of things, at least for me. I'm delighted that they may resonate with you as well.

It's a pleasure to hear from you again. I apologize for the delay in responding to your post. Thank you again for your kind words.