How To Live, Part Twenty-Seven: Equanimity

I began this series of posts back in August of 2010.  I neglected to note at the outset of the series that I am completely unqualified to provide any advice on "How to Live."  I have never harbored, and will never harbor, any such presumption.  Hence, any advice that appears here is solely attributable to the poets and their poems.  I am merely the befuddled messenger.

A further disclaimer:  as I have stated in the past, I do not believe that the purpose of poetry is to edify.  A poet who sets out to write a poem aimed at teaching us something is doomed to failure.  Thus, for instance, that contradiction in terms known as "political poetry": a soi-disant "poem" that purports to instruct us on the rightness or wrongness of a political belief (left, right, or Martian) does not, under any circumstances, qualify as poetry.  Self-regarding propaganda, yes. Poetry, no.

That being said, we do read poetry for its Beauty and its Truth.  Well, at least I do, although I may be wholly misguided.  Accordingly, the poems that appear in this series are in the nature of memoranda to myself:  they are reminders of the possibilities that Beauty and Truth open up for us.

Here, then, is a bit of good advice about how to live: 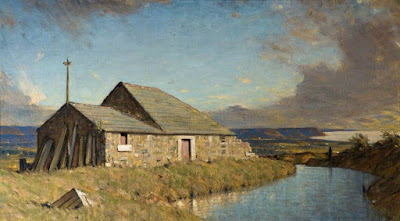 Note that Reeves acknowledges that each of us does have "devious crooked corridors" and "halls of riot" within us.  Given that we are wont to hold overly flattering views of ourselves, the recognition that these corridors and halls exist is in itself an important first step.  But this is often a matter of one step forward, two steps back.  Still, most of us try to do our imperfect best.

And once I knew
A hasty man,
So small, so kind, and so perfunctory,
Of such an eager kindness
It flushed his little face with standing shame.

Wherever he came
He poured his alms into a single hand
That was full then empty.  He could not understand.
A foolish or a blessed blindness,
Saint or fool, a better man than you.

Edwin Muir, in Peter Butter (editor), The Complete Poems of Edwin Muir (The Association for Scottish Literary Studies 1991).  The poem is untitled.  Muir wrote it in the final years of his life, and did not publish it during his lifetime.

Perfection is not in the cards for any of us, and the sooner we realize this the better.  "A foolish or a blessed blindness" that leads to the practice of kindness is certainly not a bad thing.  If nothing else, it suggests the presence of humility, which, it seems to me, is a good place from which to begin. 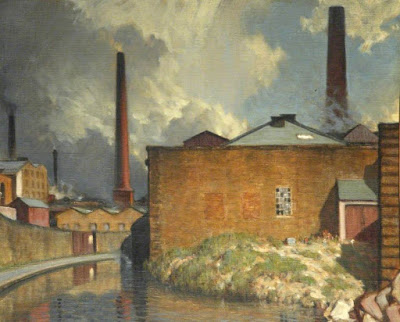 We live our lives in "the vale of Soul-making."  In that vale, exalted alpine heights and expansive seaside vistas -- and their wide perspectives -- are few and far between.  Most of our time passes in the manner of an ordinary Wednesday afternoon, waning towards evening, half-lit.  And yet.  Just over a year before writing of "the vale of Soul-making," Keats wrote this:

"I scarcely remember counting upon any Happiness -- I look not for it if it be not in the present hour -- nothing startles me beyond the Moment.  The setting sun will always set me to rights -- or if a Sparrow come before my Window I take part in its existence and pick about the Gravel."

At the risk of making a tenuous connection, a statement made by my favorite mystic may be worth considering at this point:  "If by eternity is understood not endless temporal duration but timelessness, then he lives eternally who lives in the present."  Ludwig Wittgenstein, Proposition 6.4311, Tractatus Logico-Philosophicus (1921) (translated by C. K. Ogden).  An alternative translation is:  "If we take eternity to mean not infinite temporal duration but timelessness, then eternal life belongs to those who live in the present." (Translated by David Pears and Brian McGuinness.)

What Keats and Wittgenstein have to say about living in the present moment is nothing new:  they are repeating wisdom that has been known in all places and at all times.  But this wisdom has to be learned anew by each soul that arrives here.  "Dwell[ing] in some decent corner of your being,/Where plates are orderly set and talk is quiet" is, I think, an essential element of the learning process:  living in the present moment requires presence of mind.  Easier said than done, of course.

Beauty, and grace, and wit are rare;
And even intelligence:
But lovelier than hawthorn seen in May,
Or mistletoe berries on Innocent's Day
The face that, open as heaven, doth wear --
With kindness for its sunshine there --
Good nature and good sense. 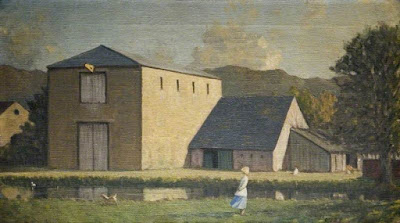 I fear that I have floated too far off into the ether.  Let's face it: inhabiting the present moment on a consistent basis (even without adding "eternity" or "timelessness" into the mix) is not something that most of us are up to.  I know that I'm not.  But something short of that may be enough to bring us a measure of repose.

In this matter of Soul-making we need to proceed in a measured, attentive, and thoughtful fashion.  There are no short-cuts.  Wrong turns and dead-ends are common.  Thus, coming anywhere close to possessing a modicum of "good nature and good sense" is, as de la Mare observes, a rare accomplishment indeed.  Enough work to keep us busy for a lifetime, with no guarantee of success.  Moreover, none of us will ever be in a position to say of ourself that we possess "good nature and good sense."  How could we?  That is for others to decide.

Yet, if we "dwell in some decent corner of [our] being," and if we "come to the heart of the world and [are] humble," we may be headed in the right direction.  And if -- an enormous if -- we are patient, receptive, and fortunate, we may arrive at a place of serenity.

Mary Coleridge, in Theresa Whistler (editor), The Collected Poems of Mary Coleridge (Rupert Hart-Davis 1954).  Coleridge wrote the poem in 1907, the year in which she died (at the age of 45). 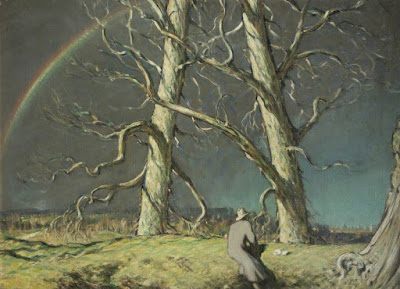 Nobly done, Stephen. One of your best.

Thank you, befuddled messenger. Your message this morning is the perfect Rx for a weak and weary pilgrim. (https://informalinquiries2nd.blogspot.com/2018/01/the-raven-by-edgar-allan-poe-on.html) Best wishes, R.T. (Tim) Davis

Andrew: That's very nice of you to say. Thank you. I've long been fond of "Precept," and, as I thought about it recently, the other poems came to mind. Plus, the News of the World (which I do my best to avoid) always makes me long for "good nature and good sense" in the world (and in myself). A wish many of us share, I suspect.

In any case, I greatly appreciate your kind words. As always, it is a pleasure to hear from you. Thank you for visiting again.

Tim: It's good to hear from you again. I'm pleased you liked the post, and I'm glad it (and, of course, the poems) may have come at an opportune time.

I read your Raven post earlier today, and I heartily agree with your plan to make an "excursion through oceans of poetry." I feel that I have barely scratched the surface of poetry, and it excites me to think of what lies ahead. (Although I do a great deal of turning back and revisiting as well.)

Thank you very much for stopping by again. Best wishes to you as well.

I loved your beautiful, insightful sentence about Wednesday afternoon. In fact, at first I thought I was reading an unknown line from Keats! I also appreciated your choice of his remark about the Sparrow.

Esther: Thank you very much for those kind words. I'm pleased you liked the post. As for the comparison with Keats: I'm at a loss for words. Of course, that's extremely nice of you to say, and I am flattered. However, I will (needless to say) never be within a billion light years of Keats! But, again, thank you very much. (As for Wednesday afternoons: that's sometimes how they are, isn't it? And it's not a bad thing.)

"Most of our time passes in the manner of an ordinary Wednesday afternoon, waning towards evening, half-lit."

I have frequently heard Wednesday referred to as "hump day," meaning the work week is half over. I always thought that was a rather dark reflection on living, as if we are trudging through life as automatons ruled by vacuous obligations and occupations. Now, having read your post, I will never think of Wednesdays the same way.

Mr. Post: Ah, yes, "hump day." I haven't thought of that in a while, and it didn't occur to me when I chose Wednesday afternoon as the setting for my observation. I suspect I just liked the sound of "Wednesday" ("Tuesday" and "Thursday" didn't sound right for some reason). That being said, your point is a good one: the idea of hump day seems a bit dispiriting to me as well. All of this is to be cured by Keats's "the Moment" (and sunsets and sparrows).

Thank you very much for visiting, for sharing your thoughts, and for your kind words. I hope you'll return soon.