Around the middle of the week before last, I read this:

Heaven-Haven
A nun takes the veil

I have desired to go
Where springs not fail,
To fields where flies no sharp and sided hail
And a few lilies blow.

And I have asked to be
Where no storms come,
Where the green swell is in the havens dumb,
And out of the swing of the sea.

The fragmentary beginnings of the poem appear in a notebook entry made by Hopkins in 1864 under the title "Rest."  Lesley Higgins (editor), The Collected Works of Gerard Manley Hopkins, Volume III: Diaries, Journals, and Notebooks (Oxford University Press 2015), page 203.  Hopkins converted to Catholicism two years later. Four years after his conversion, he took his vows as a Jesuit novice.

These background details may be of interest, but it is best to leave well enough alone, isn't it?  "Heaven-Haven" speaks for itself.  Any further comment is superfluous.  Nay, destructive. 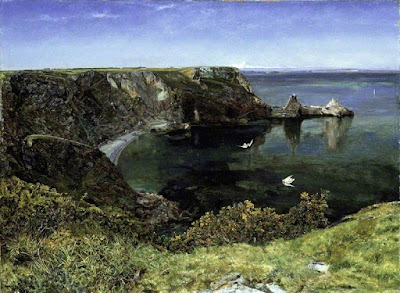 "Heaven-Haven" was still with me when, last weekend, I happened upon this:

The kind of place
where the way a traveler's tracks
disappear in snow
is something you get used to --
such a place is this world of ours.

Encountering Princess Shikishi's waka after reading "Heaven-Haven" was purely a matter of coincidence, but I always harbor the notion (an overly romantic notion, no doubt) that, when it comes to reading poetry, such coincidences are placed in our path for a reason.

By who or by what, you may ask.  I have no answer.  I could recur to this statement by Philippe Jaccottet, which appeared in my previous post:  "Of all my uncertainties, the least uncertain (the one least removed from the first glimmers of a belief) is the one given to me by poetic experience:  the thought that there is something unknown, something evasive, at the origin of things, at the very centre of our being."  Philippe Jaccottet (translated by Mark Treharne), Landscapes with Absent Figures (Delos Press/Menard Press 1997), page 157.

On the other hand, perhaps a more commonplace (yet still miraculous) explanation suffices. 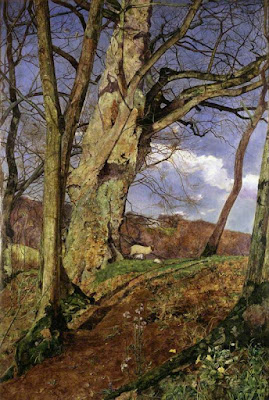 Finally, a few days ago, I revisited this waka:

The poem brought me back full circle to "Heaven-Haven."  A monk-poet in 11th century Japan.  A poet and a nun in 19th century England.  The beauty of poetry -- of the World -- is of a piece, at all times and in all places. 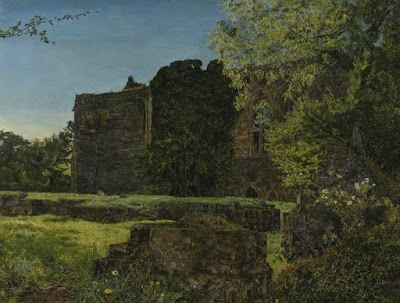 'Heaven Haven' and John Inchbold's painting of March have been brought to mind again by your piece. One so simple, one so detailed, both I love. Thank you Stephen.

Jane: You're welcome. I'm pleased you like the pairing. "Anstey's Cove" came to mind in connection with "Heaven-Haven," and I then realized that "A Study, in March" and "Bolton Abbey" fit in with the post as well. Yes, the detail in "A Study, in March" is amazing. And the painting captures the light and shadow of early spring perfectly, doesn't it? The flowers in the foreground (found also in "Bolton Abbey", "Anstey's Cove," and other paintings by Inchbold) are a lovely, characteristic touch by him. Although he was not part of the Pre-Raphaelite Brotherhood, he certainly seems to share their ideals (at least to my eye).

It's good to hear from you again. As always, thank you very much for visiting, and for sharing your thoughts.

Mr. Brown: Thank you very much. "Ingathering" is a nice word: Hopkins's "inscape" and "instress" come naturally to mind. (Speaking of the poems and the paintings of course, not my connecting text!)

In the grip of a fairly violent early March storm, my apartment has seemed a perfect haven. From my front windows I could look out at curtains of "wintry mix" being blown up my street.
Today "A Study in March" is a fune antidote. Yes, he does get the light & color of early Spring perfect. That painting is a "Heaven-Haven" itself.
Susan

Susan: "a 'Heaven-Haven' itself" is a perfect description of the painting. I feel that I could spend a lifetime daydreaming myself into it. I can imagine that it was indeed a good "antidote" to the weather you were experiencing. I hope that all is well.

It's always a delight to hear from you. Thank you for taking the time to visit, and for sharing your thoughts

Hello Stephen......I tend to think that rather than the coincidences or synchronicities that you describe 'finding us', it's rather that we find them. To do so you need to be very alert, observant and in the present moment. Well, just a thought! I love reading your beautiful blog and always find something that touches me. Thank you.

Denise: That's an excellent thought: we do play a role in these events, and, as you say, attentiveness and receptiveness are essential. (I claim no powers in that regard: I fail on a daily basis to be "alert, observant, and in the present moment." But these are qualities that I am always trying to cultivate. A constant struggle, for me at least.) Perhaps another way of putting it is that it is possible to place ourselves in the path of these coincidences and synchronicities.

Thank you very much for your kind words about the blog. I appreciate your long-time presence here, and it is always good to hear from you.