Please bear with me:  I have already entered autumn.  I did so a few weeks ago.  Because it is my favorite season, each year I try to hasten its arrival.  Something along these lines:  "When I said autumn, autumn broke."  (Elizabeth Jennings, "Song at the Beginning of Autumn.")

The irony of my annual attempt to hurry along the advent of autumn is not lost on me:  each season has its own beauty, but autumn's is the most evanescent.  I hurry autumn's beauty along only to watch it vanish.  I suppose there is a lesson in this.  Ah, yes, of course:  "first known when lost."

Hsin Ch'i-chi (1140-1207) (translated by Burton Watson), in Burton Watson, The Columbia Book of Chinese Poetry: From Early Times to the Thirteenth Century (Columbia University Press 1984), page 371. The poem is untitled. 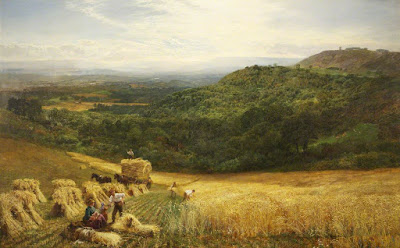 A few days ago, while out on my afternoon walk, I looked to the west at a row of tall pine trees at the far side of a meadow, near the bluffs above the waters of Puget Sound.  The pines -- swaying silently in the distance -- were set against a deep blue and purple, steel-grey wall of approaching dark storm clouds.  The scene seemed to betoken all that is to come.

"This is the beginning of the pageant of autumn, of that gradual pompous dying which has no parallel in human life yet draws us to it with sure bonds.  It is a dying of the flesh, and we see it pass through a kind of beauty which we can only call spiritual, of so high and inaccessible a strangeness is it.  The sight of such perfection as is many times achieved before the end awakens the never more than lightly sleeping human desire of permanence.  Now, now is the hour; let things be thus; thus for ever; there is nothing further to be thought of; let these remain.  And yet we have a premonition that remain they must not for more than a little while." 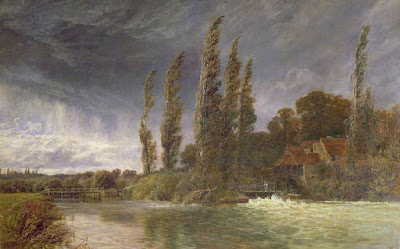 We have seen this passing and vanishing before.  But we never tire of it.  Or we ought not to.  If we ever do, our life may as well be over. This is the World we were made for.

Sitting at Night on the Moonlit Terrace

Fall days are not entirely free of heat,
but fall nights are clear right through to dawn.
So the old man for several evenings running
has been sitting outdoors until the third watch.
The wind blusters, stars bright one moment, gone the next;
clouds scud by, the moon greeting them, sending them off.
You chase after delights, chase in vain,
then when you think there're no delights, suddenly they come!

Yang Wan-li (1127-1206) (translated by Burton Watson), in Burton Watson, The Columbia Book of Chinese Poetry: From Early Times to the Thirteenth Century, page 349. 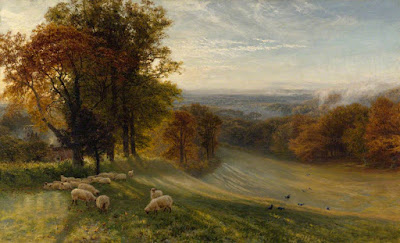 The above poem seems to me to be a brilliant example of Dickinson's almost unparalleled skill with metaphor. She lived in New England, where the arrival of autumn was loudly announced and painted by nature. Some readers of the poem, much too eager to ferret out a poem's hidden meaning, to mine out what the author "really meant,' have concluded that since the poem was written in 1862, the mention of "blood" must mean that Dickinson is referring to the sanguinary carnage of the Civil War. These same critics also yearn to link the poem to menstruation. It's true, no doubt, that I am a naïve country boy in the hinterlands, an alien to the subtle nuances of poetry, the well-camouflaged but true meanings of verse, those secrets the big-city readers find in tortuous abundance, but, alas, no matter how the cognoscenti of canto and stanza hector me to abandon the land of the Philistines, I persist in my ignorant and shamefully rural, inane and vapid ways, and, I remain a stubborn rustic, one who persists in seeing the poem as no more--and it's enough by far--than a beautiful description of autumn come to Amherst. If the poem means anything--and should we always zealously hunt for meaning?--it means those things autumn's arrival has always meant: the processes of nature and how the human imagination applies process to the living of a life. I'll muse on my paucity of poetic sophistication this evening about vesper's time when I go out to shepherd the plodding and drooling cows in from the pasture to their haven from the rapidly approaching darkness of late September.

I've come to appreciate late August in its own way. It's early enough to feel like I'm stealing a march on time by thinking autumn thoughts, but there are those first genuine signs of seasonal change — cooler nights and mornings, early leaves dropping. I'm even shameless enough to be cheered by the first Halloween decorations in grocery stores.

Speaking of Puget Sound, you may be familiar with the poet/translator Sam Hamill, who lives there. I've always loved his translations of Li Po's and Tu Fu's twenty-year friendship in poetry. One autumn poem, for example:

Longing for someone
in Ch'ang-an —
the crickets sing on the autumn
near the golden well.

Frosty winds bring a chill,
and my futon's the color of cold.
The lamp has burned low
and I am exhausted by longing.

She who is lovely as all the flowers
remains beyond the distant clouds.
The heavens are deep blue and endless;
below, the waves are pale.

The sky has no end, like my journey.
We suffer as we go.
Even dreams cannot cross over
the vast mountains that divide us.

And this eternal longing
can turn a heart to dust.

Those ancient Chinese poems are so lovely. Thank you, I would never have come across them.

Anonymous: Thank you very much for your autumn meditation, and for sharing Dickinson's poem. You and I are in agreement on the sort of interpretive fancies that you mention at the outset of your comment: they are nonsense. I think you are familiar with one of my basic precepts: "Interpretation and explication are the death of poetry." The two examples you cite illustrate my point.

I completely agree with your fine concluding remarks: "[the poem] means those things autumn's arrival has always meant: the processes of nature and how the human imagination applies process to the living of a life." Exactly. The wonderful thing about poetry is how it connects the World -- autumn, in this case -- "to the living of a life."

Thank you again for sharing your thoughts and the poem, and for stopping by.

Damian: Thank you very much for sharing those lovely thoughts on late August: you've made me sad that it is gone for the year! I'm reminded of some comments about August expressed by Sam Vega ("a particularly beautiful month with a feeling all to itself") and Mr. Ashton ("August is an almost borderless month") in response to my recent post titled "Autumn." Wallace Stevens's line in "A Rabbit as King of the Ghosts" also comes to mind: "And August the most peaceful month." Like you, I have come to appreciate August more and more.

Thank you as well for sharing Sam Hamill's translation of Li Po's poem. Yes, I am familiar with Hamill's fine translations of Chinese poetry. (He is also, as I'm sure you know, an excellent translator of Japanese poetry, and produced wonderful translations of works by Bashō and Issa.) My three basic standbys for the translation of Chinese poetry are Arthur Waley, Burton Watson, and Hamill: three successive generations, as it turns out. Unfortunately, they have now all passed away, Watson last year and Hamill this year. But their work will always remain, for which we should be grateful.

Here is a lovely translation by Hamill of an autumn poem by Hsu Hsuan (916-991), which I suspect you know:

Pine winds sing, the evening village
smells of grass, autumn in the air.

A lone bird roams down the sky.
Clouds roll across the river.

You want to know my name?
A hill. A tree. An empty drifting boat.

Thank you again for sharing your thoughts, and for the poem by Li Po (via Sam Hamill). And thank you very much for visiting.

hart: You're welcome. I'm pleased you liked the poems. They are lovely, aren't they? I never cease to be amazed at how beautiful and moving traditional Chinese poetry is, and how it crosses time and space the way it does. Thank you very much for visiting.

Oh, no. I wasn't aware that Hamill had died! I usually would look him up every year or so to see if anything new had been published, so obviously it's been a while since I last did that. Well, thank you for letting me know — I suppose I'd rather have learned that here than in a generic news obituary. What's a discussion of autumn without a little genuine melancholy, after all?

Damian: Yes, sad, but, as you know, the wonderful thing about poets (and poet-translators) is that their work will always be with us. I feel that, for instance, Hamill, Watson, and Waley have given me a bounty of translations of Chinese and Japanese poetry (and prose as well) that I will never exhaust in my lifetime.

By the way, Hamill wrote a lovely poem in tribute to Watson which he contributed to Salutations: A Festschrift for Burton Watson (edited by Jesse Glass and Philip Williams), which was published in 2015: the year in which Watson turned 90. Hamill's poem includes the following lines: "I raise/a cup of good Nihonshu//To a master, a/lifetime's companionship in/wandering borders./Through hard times and good, decade/by decade, when my heart yearned//For good company,/I always knew where to turn."

Thank you very much for the follow-up thoughts.

Autumn has come to us again, the air and light have changed. Something shifts in us as well. Thank you for these beautiful poems which I've read through more than twice. I'll copy Hsin Ch'-chi's in my journal. His words on grief are exactly right. And thanks to Damian for the Li-Po poem, one I know and love.
I wish I had something to contribute this cool,rainy morning in Pennsylvania, but think what's been offered is lovely and satisfying enough for now.
Very best wishes,
Mary

Mary: Thank you very much for sharing those thoughts. Yes, the feeling of autumn has a great deal to do with "the air and light," doesn't it? More so, it seems to me, than any other season.

I'm pleased you liked the poems, and I too appreciate Damian sharing Li Po's poem. I seem to recall you mentioning in the past that you have a copy of Sam Hamill's Crossing the Yellow River, which is where I first came across it. As for Hsin Ch'i-chi's poem: I copied it in my journal as well! The poem is affecting (and, as you say, "exactly right"), in that restrained yet moving manner that is so characteristic of much of traditional Chinese poetry.

As ever, thank you for visiting. I wish you a happy, beautiful autumn.

You describe Autumn so perfectly Stephen, as do the poems you have chosen. There is nothing I can add, other than thank you for your wonderful website.

Denise: Thank you very much for your kind words. I'm pleased you liked the poems: they are lovely, and moving, aren't they?

It is always a pleasure to hear from you. Thank you for stopping by again. I hope you are having a wonderful autumn.