One might not expect the poetry of Robert Louis Stevenson and A. E. Housman to share a great deal in common:  Stevenson, teller of tales, inveterate traveller, doomed to die at an early age, and knowing full well his fate; Housman, exacting classical scholar, ostensibly impassive, but harboring an unrequited love for over forty years, until the death of the beloved in a foreign land.  But I would suggest that, in their poetry, they are kindred souls.  One needn't look far to find the thread of mortality running through their poems, now at the surface, now receding.  Yet it is always there, despite the bluff and hearty manner they both often affect.

On two occasions, this consonance of spirit is displayed in a clear and lovely fashion.  One occasion involves poems by Stevenson and Housman that have their source in a traditional French children's song.  The second involves a self-penned epitaph transformed into an elegy.

While living in France in 1875, Stevenson wrote the following rondeau:

Robert Louis Stevenson, in Roger Lewis (editor), The Collected Poems of Robert Louis Stevenson (Edinburgh University Press 2003).  "Nous n'irons plus au bois" (which may be translated as "we will no longer go to the woods") is the first line of a children's song. The second line of the song is:  "Les lauriers sont coupés" ("the laurels are cut down").  Stevenson likely had read a poem by the French poet Théodore de Banville (1823-1891) which begins with these two lines.  This may have inspired the rondeau.  Ibid, page 560.

The poem first appeared in a collection of Stevenson's letters published in 1899, five years after his death.  Sidney Colvin (editor), The Letters of Robert Louis Stevenson to His Family and Friends, Volume I (Methuen 1899), pages 105-106 (letter to Frances Jane Sitwell, August 1875).  It has been suggested that Housman may have come across the poem when reading this volume.  Roger Lewis, The Collected Poems of Robert Louis Stevenson, page 560.

A. E. Housman, Last Poems (Grant Richards 1922).  The final handwritten draft of the poem contains the title "Nous n'irons plus au bois."  Archie Burnett (editor), The Poems of A. E. Housman (Oxford University Press 1997), page 70.  The poem served as the untitled epigraph to Last Poems, but without the title; the text was italicized.

Is Housman's poem an intentional echo of Stevenson's, or is its existence merely a coincidence, a case of each poet being separately enchanted by the haunting sound and sense of "nous n'irons plus au bois"?  We will never know. 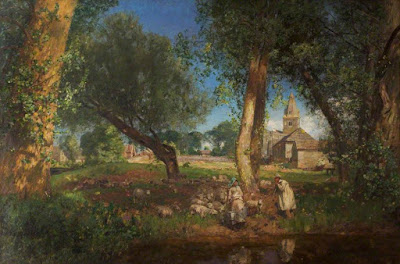 No speculation is necessary when it comes to the second crossing of paths between the two poets.  The connection is clear.  We begin with Stevenson's best-known poem:

Under the wide and starry sky,
Dig the grave and let me lie.
Glad did I live and gladly die,
And I laid me down with a will.

This be the verse you grave for me:
Here he lies where he longed to be;
Home is the sailor, home from sea,
And the hunter home from the hill.

The poem was written between 1879 and 1880.  Stevenson lived fourteen more years, but he was never under any illusions about his prospects.  This is evident throughout his poetry, but there is no self-pity, no complaint.  For instance:

I have trod the upward and the downward slope;
I have endured and done in days before;
I have longed for all, and bid farewell to hope;
And I have lived and loved, and closed the door.

Stevenson died in Samoa on December 3, 1894.  On December 22, 1894, the following poem by Housman was published in the weekly issue of The Academy above an obituary for Stevenson.

Home is the sailor, home from sea:
Her far-borne canvas furled,
The ship pours shining on the quay
The plunder of the world.

Home is the hunter from the hill:
Fast in the boundless snare
All flesh lies taken at his will
And every fowl of air.

'Tis evening on the moorland free,
The starlit wave is still:
Home is the sailor from the sea,
The hunter from the hill.

Housman's writing of "R. L. S." within such a short time after Stevenson's death, and seeing it into print within three weeks, is something to ponder.  Bear in mind that A Shropshire Lad was not published until May of 1896.  In 1894 he was known only as a professor of Latin at University College London, not as a poet.  He was not in the habit of seeking to publish poetry in periodicals.  It would seem that something had moved him.

As for the poem itself, my oft-stated principle applies:  Explanation and explication are the death of poetry.  "R. L. S." is a fine and lovely thing. 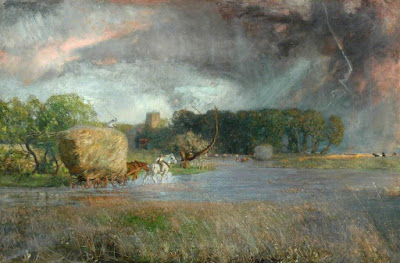 Perhaps I am being too reductive in suggesting that Stevenson and Housman are kindred souls.  An argument can be made that death is the ultimate subject of all poetry.  Their death-haunted poetry is arguably no different than that of scores of other poets.  Moreover, an alternative argument can also be made, as articulated by Edward Thomas:  "all poetry is in a sense love-poetry."  (Edward Thomas, Feminine Influence on the Poets (Martin Secker 1910), page 87.) Then again, beauty is a candidate as well, isn't it?  But this in turn leads to a further thought: "Death is the mother of beauty."  (Wallace Stevens, "Sunday Morning.")  And on it goes.

Enough of that.  As ever, it is the individual poem that matters.

An End of Travel

Let now your soul in this substantial world
Some anchor strike.  Be here the body moored; --
This spectacle immutably from now
The picture in your eye; and when time strikes,
And the green scene goes on the instant blind --
The ultimate helpers, where your horse today
Conveyed you dreaming, bear your body dead. 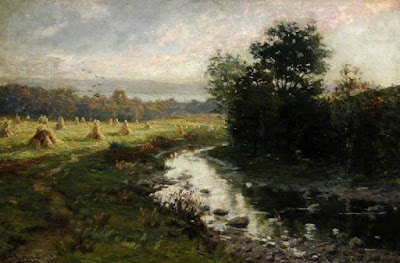 The epitaph may be the best known poem that we associate with Stevenson; but I wouldn't be surprised to learn that a lot of us know bits from his poems from children that we have never connected with his name. I know that there is one that I read years ago but only this year learned was his--did you quote it, the one beginning "In winter I get up at night/And dress by yellow candlelight."?

George: Thank you for your kind words about the post. I'm pleased you liked it.

Your point about RLS's children's verse is an excellent one: as it happens, I had a similar thought when I was drafting that sentence. I wondered whether I should qualify "best-known" with something such as "with the exception of some of his children's poems . . ." I had in mind, for instance, "Rain" ("The rain is raining all around . . . and on the ships at sea", "The Land of Nod," and, in particular, "Whole Duty of Children." But I decided to stay with "best-known" since one comes across "Requiem" in so many different places.