One of my long-term projects is to work my way through Coleridge's notebooks.  My progress has been fitful, but I intend to persist, since the rewards are great.  I have been keeping a commonplace book in which I enter gems that I come across.  In preparation for my latest visit, I reviewed some of my entries, and found this:

"The rocks and Stones seemed to live put on a vital semblance; and Life itself thereby seemed to forego its restlessness, to anticipate in its own nature an infinite repose, and to become, as it were, compatible with Immoveability."

The striking-through of "seemed to live," with the change to "put on a vital semblance," is interesting.  Coleridge's observation appeals to the pantheist in me, to the part of me that is prepared to encounter Immanence at any moment.  On another note, the observation demonstrates why Coleridge and Wordsworth developed (at least for a time) such a close bond.  (More on Wordsworth in a moment.) 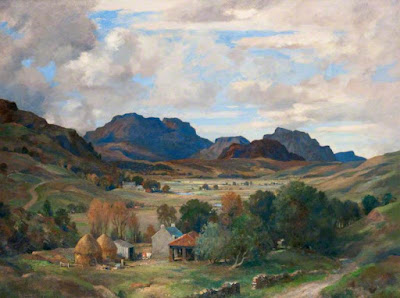 But it is the movement from the opening clause to the conclusion that makes Coleridge's entry so wonderful:  "Life itself thereby seemed to forego its restlessness, to anticipate in its own nature an infinite repose, and to become, as it were, compatible with Immoveability." This is a beguiling, moving, and beautiful thought.

The word "Immoveability" brings to mind Wallace Stevens' "This Solitude of Cataracts":  "He wanted his heart to stop beating and his mind to rest//In a permanent realization . . . Without the oscillations of planetary pass-pass,/Breathing his bronzen breath at the azury center of time."  However, the comparison is not wholly apt:  Stevens' conception is colder and more abstract than the warmth and emotion in Coleridge's observation -- in Coleridge, one senses a poignant longing for serenity, for a home.  "Infinite repose."  Of course, Coleridge's thoughts and emotions were a maelstrom and a universe unto themselves, so I am not trying to reduce him to a single strand of his personality.  But I do think this feeling is one that often recurs in his prose and poetry.

In mid-December, I read the following poem, and I immediately thought of it when I came upon Coleridge's entry.

The Stone on the Hilltop

Autumn wind:  ten thousand trees wither;
spring rain:  a hundred grasses grow.
Is this really some plan of the Creator,
this flowering and fading, each season that comes?
Only the stone there on the hilltop,
its months and years too many to count,
knows nothing of the four-season round,
wearing its constant colors unchanged.
The old man has lived all his life in these hills;
though his legs fail him, he still clambers up,
now and then strokes the rock and sighs three sighs:
how can I make myself stony like you? 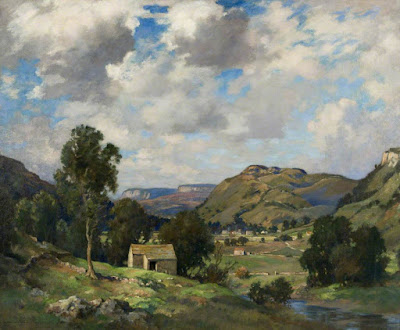 In his selected edition of Coleridge's notebooks, Seamus Perry provides this comment on Notebook Entry 1189:

"Rocks and stones are invested with life in [William Wordsworth's] poetry: there is a sea-beast-like stone in 'Resolution and Independence' . . .; and the Pedlar, an idealized self-portrait [Wordsworth] had described in blank verse written in the Coleridgean spring of 1798, enjoys the same sort of enlivening vision: 'To every natural form, rock, fruit, and flower,/Even the loose stones that cover the highway,/He gave a moral life' ('The Pedlar,' ll. 332-4: Jonathan Wordsworth, The Music of Humanity (1969), 182)."

The lines that Perry quotes first appeared in Wordsworth's manuscript of "The Ruined Cottage" before making their way into "The Pedlar" (and eventually into Book Third of "The Prelude").  This is the passage in which the lines are originally found:

To him was given an ear which deeply felt
The voice of Nature in the obscure wind,
The sounding mountain and the running stream.
To every natural form, rock, fruit and flower,
Even the loose stones that cover the highway,
He gave a moral life, he saw them feel
Or linked them to some feeling.  In all shapes
He found a secret and mysterious soul,
A fragrance and a spirit of strange meaning.

I am aware that there are those who have no time for these sorts of passages in Wordsworth.  I am not out to convince anyone to change their opinion.  As for me, passages such as this are what keep me coming back to Wordsworth's long narrative poems.  I confess that I avoided the poems for years.  And I will not deny that they can at times be prolix and tedious.  But then I arrive at lines like these, and the effort is rewarded.

[A side-note: one cannot speak of rocks and stones and Wordsworth without mentioning this:

I have written about this poem previously.  Hence, I will not repeat myself, other than to say that the poem is indeed a marvelous thing.] 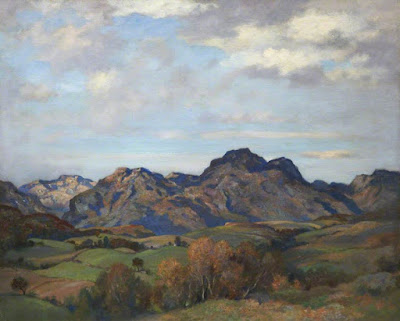 In Chinese poetry, one often hears of recluses living in the mountains amidst the rocks and stones and trees and mists and white clouds. They might be Buddhist monks or Taoist adepts or woodcutters. Chinese poets would go in search of them in order to obtain wisdom, but would usually come back without having found them.  They would then write a poem about their journey.

However, a few of the recluses were themselves poets.  They are more circumspect than Coleridge and Wordsworth when it comes to the place of rocks and stones in the larger scheme of things.  They are not fond of abstractions and explanations.  They point things out.

In Reply to Questions

I happened to come to the foot of a pine tree,
lay down and slept soundly on pillows of stone.
There are no calendars here in the mountain;
the cold passes but I don't know what year it is. 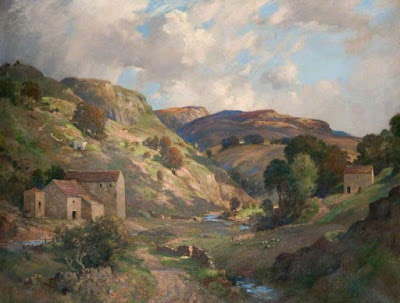 James Whitelaw Hamilton, "Wharfedale"
Posted by Stephen Pentz at 1:10 AM

I find Wordsworth's poem "The Ruined Cottage" to be--and I have no data to support me so I just blurt out what I sense--is the greatest unread poem in English poetry. If John Stuart Mill declares Wordsworth's poetry lifted him, Mill, from despair and hopelessness, I can say this particular poem by Wordsworth has enabled me to endure the cruel vicissitudes of life and the blind indifference and suffering inherent in the human predicament. How often have I, in bitter moments of sorrow, found myself saying aloud what Armytage says at the end of the poem, the last words he speaks in the poem:

That what we fell of sorrow and despair
From ruin and change, and all the grief
The passing shews of being leave behind,
Appeared an idle dream and could not live
Where meditation was. I turned away
And walked along my road in happiness.

Are the words unguent to the savaged soul? Not completely, but they help the struggling heart find a sliver of hope. The words help. Can we ask more of great poetry?

Worth reading is Malcolm Guite’s book about Coleridge, which is called Mariner. Guite is able to read Coleridge as himself a poet and Anglican theologian, but (as I recall) without falling into academese. Guite seems to me more sympathetic to Coleridge than Richard Holmes, author of that 2-volume biography. Mariner is an exceptional book.

Bruce: Thank you very much for those lovely thoughts. I completely agree with you about "The Ruined Cottage": it is a wonderful poem. The lines you quote (as well as the 20 or so lines that precede it and the lines that follow it) always move me. As you say: "The words help."

A side-note: I was happy to see that you quote from the earlier version of the poem. The original, stand-alone manuscript of the poem is the best version, in my humble opinion. As you know, the history of the evolution of the poem is fascinating (and confusing). Coleridge was quite fond of it. Your assessment that it is "the greatest unread poem in English poetry" is not one I would quarrel with. Part of this may have to do with it ultimately being incorporated into the first book of The Excursion (with revisions that are not always congenial). I am fond of The Excursion, but I think "The Ruined Cottage" would be far better known if it had maintained its existence as a separate poem. Of course, I am certainly not the first one to make this observation: as you know, a great deal of ink has been spilled on the topic.

But enough of this extraneous matter: it is a beautiful and moving poem, and I greatly appreciate your meditation on it, and your sharing of Wordsworth's lovely lines. As ever, it's great to hear from you. Thank you again.

Mr. Nelson: It's good to hear from you again. Thank you for the recommendation of Guite's Mariner. As it happens, I discovered his website a few years ago, and purchased a copy of Mariner when it was published. Alas, I have only dipped into it here and there: I need to read it properly. However, based upon what I have read, I agree with your assessment of it. He has immersed himself in Coleridge, and I am reminded of Lowes' The Road to Xanadu (although Guite seems to keep his focus mainly on Coleridge's life and how it relates to the poem, while Lowes, in addition to keeping his eye on Coleridge, has created a marvelous labyrinth of fascinating connections). I also agree with you that, thankfully, Guite does not "fall into academese." I need to return to it.

Lowes’ book implies the importance of wide reading — much of it outside the products of one’s own day — for rich imaginative development. That has troubling implications as regards high school and college English today, where it seems there’s so much emphasis on the perceived problems of our immediate time.

Wurmbrand: Thank you very much for the follow-up thoughts on Lowes and The Road to Xanadu. I agree with what you say. But the survival of what matters has always been a near-run thing, hasn't it? I harken back to Wordsworth complaining about the dire state of culture in his preface to the second edition of Lyrical Ballads: "For a multitude of causes, unknown to former times, are now acting with a combined force to blunt the the discriminating powers of the mind, and, unfitting it for all voluntary exertion, to reduce it to a state of almost savage torpor." And so it goes in each generation. Each of us must do what we can to preserve what matters. I am heartened, for instance, that Mr. Guite wrote his book, and could find a publisher, in this day and age.