A path I often follow takes me past a row of six willows.  They stand at the edge of a wide meadow which slopes down to the bluffs above Puget Sound.  I suspect the trees were planted sometime in the previous century, when what is now a city park was an army post.  I have wondered whether they were placed there by someone far away from home who longed for the willows of their past.  I have thought about the thousands of soldiers who transited through the post during World War II on their way to the Pacific.  A willow is a redolent thing.

Over the last month, their leaves have gone from yellow-green to green-yellow to full green.  As I walked beside them on a windy day earlier this week, their boughs tossed and swayed with the deep sound of summer.  As I came to the final willow in the row, a single green leaf floated down in front of me.

A random occurrence.  Just one of those things. 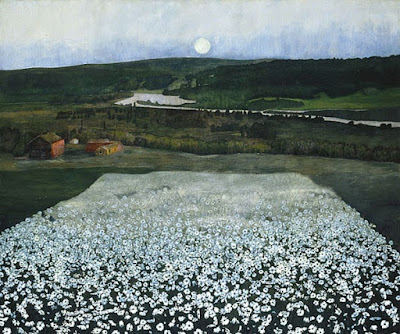 Anonymous: Thank you very much. I appreciate your stopping by.

Hello Stephen, what a great poem, and painting - I love Harald Sohlbergs work.
The poem reminds me of one by Dante Gabriel Rossetti:

Between my knees my forehead was,—
My lips, drawn in, said not Alas!
My hair was over in the grass,
My naked ears heard the day pass.

My eyes, wide open, had the run
Of some ten weeds to fix upon;
Among those few, out of the sun,
The woodspurge flower’d, three cups in one.

From perfect grief there need not be
Wisdom or even memory:
One thing learnt remains to me,—
The woodspurge has a cup of three.

I hope life is treating you well in this beautiful time of year.

Maggie Emm: It's good to hear from you. I'm pleased you liked the poem. Yes, Sohlberg's work is wonderful, isn't it? In one of his prior comments here, John Ashton pointed out to me that there was an exhibition of Sohlberg's paintings at the Dulwich Picture Gallery last year. How I would have loved to see that!

Ah, "The Woodspurge": a lovely poem. Thank you very much for sharing it: it is a nice complement to "Shinto."

As ever, thank you very much for stopping by. Spring has been wonderful this year, things being what they are. Nothing stops me from my daily walks, of course. Take care.

Stephen, I read your post this morning and was about to post a comment when to my surprise I saw my own name already mentioned by you in a previous reply. I remember that exhibition very well, not only for the privilege of seeing such wonderful paintings, but also because the day we visited the exhibition was our twenty-fifth wedding anniversary and the visit was one part of how we chose to celebrate the day.

I think you may have posted the Borges poem before, either that or I have read it elsewhere, nevertheless it is a wonderfully evocative poem. I love these lines" we are saved by humble windfalls of mindfulness or memory:". How true.

From my allotment I have a view of a railway embankment, at the other side of that railway line is a reservoir and here many, many years ago I saw my first heron at close quarters catching a fish. Now, whenever a train passes by along the line and draws me to look up I remember that moment, the sun on the water, the lapping and gurgling sounds, the smell of the wooded place where I stood and watched quietly. As you say, just one of those things. A few moments either way and I would not have witnessed what I did, now it is still there rooted deep in memory.

Spring has been wonderful here too, both weather-wise and with a huge increase in the number of birds, noticeable both by the sightings of ones usually only rarely seen and the variety of songs heard every day.

John: I'm pleased you liked "Shinto." And, yes, it has appeared here before, on more than one occasion: I'm quite fond of it. I'm not surprised that it floated up to me again in our current situation. As I'm sure you know, Borges has a number of lovely "list poems" along these lines. "Shinto" always puts me in mind of two "list poems" by Ivor Gurney which I believe you and I have talked about before: "Common Things" ("The dearness of common things . . .") and "The Escape" ("I believe in the increasing of life whatever/Leads to the seeing of small trifles . . .").

Thank you very much for sharing the lovely anecdote of the heron: we never know what we will encounter from moment-to-moment, do we? Nor what will reside in our memory for the rest of our life. (An aside: we are fortunate to have many Great Blue Herons in this area, including a large colony which nests each year high up in a stand of tall trees near a waterway which is close by. They are wonderful creatures.)

It is always a pleasure to hear from you. Let's hope that things will soon begin to return to normal (whatever that may mean). In any case, my walks continue as usual, and now you've motivated me to pay a visit to the local heron residences! Take care.

A beautiful poem, completely new to me. I'm just now catching up on past entries on your blog and as always, feeling inspired, comforted and carried away.

Nikki: Please accept my apologies for the delay in responding to your comment. It's always good to hear from you.

It is a wonderful poem, isn't it? I return to it often, either in the book in which it appears or in my mind. I'm happy you found it here.

Thank you very much for the kind words. Take care.