In mid-May, the ants emerged from hibernation and immediately embarked upon their yearly castle-building.  Early in June, the first pink blossoms opened on the wild rose bushes.  As the meadow grasses grew tall, the swallows arrived, and now each afternoon they skim quickly over the fields, curving, climbing, and diving for insects. The past week or so, right on schedule, the purplish-pink sweet peas began to bloom, and, as always, they are making their way onto the paths from the edges of the meadows.
Imagine that: the World just goes on being the World.  Beautiful, mysterious, unfathomable.  Taciturn, yet eloquent with Immanence.
Nobody Knows
Often I've heard the Wind sigh
By the ivied orchard wall,
Over the leaves in the dark night,
Breathe a sighing call,
And faint away in the silence,
While I, in my bed,
Wondered, 'twixt dreaming and waking,
What it said.
Nobody knows what the Wind is,
Under the height of the sky,
Where the hosts of the stars keep far away house
And its wave sweeps by --
Just a great wave of the air,
Tossing the leaves in its sea,
And foaming under the eaves of the roof
That covers me.
And so we live under deep water,
All of us, beasts and men,
And our bodies are buried down under the sand,
When we go again;
And leave, like the fishes, our shells,
And float on the Wind and away,
To where, o'er the marvellous tides of the air,
Burns day.
Walter de la Mare, Peacock Pie: A Book of Rhymes (Constable 1913). 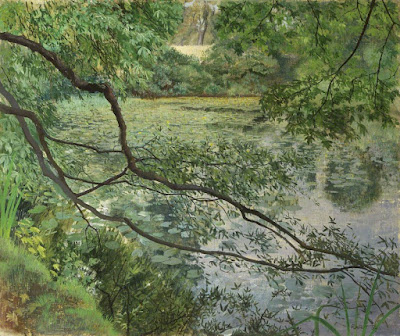 The maddest dream - recedes -unrealized -
The Heaven we chase-
Like the June Bee-before the Schoolboy-
Invites the Race-
Stoops to an Easy Clover-
Dips - Evades -
Teazes - deploys -
Then - to the Royal Clouds-
Spreads his light pinnace-
Heedless of the Boy-
Staring - defrauded - at the
Mocking sky-
Homesick for steadfast Honey-
Ah, the Bee
Flies not- that brews
That rare variety!

I'm not sure Miss Emily and De La Mare mean the same thing when they speak of our failure to grasp the great mystery of life. The discrepancy, if one exists, does not bother me; it cannot be much, so attenuated as to be a thing hair. I'd say, Mr. Pence, that, yes, our maddest dream, which is to get to the core of beauty, that beauty represented by the nightingale Keats hears, that place "Where music, moonlight, and feeling are one," [from Shelley] is forever forbidden to us. Art does "tease" us out of thought, if just for a moment. We live in world of process, one in which "all that's beautiful flows away like the waters." See Stevens's pigeons at evening make "[a]mbiguous undulations as they sink, / Downward to darkness on extended wings." It's twilight and "Hedge-crickets sing; and now with a treble soft / The red-breast whistles from a garden-croft; / And gathering swallows twitter in the skies." And you and I, sir, well, we [watch] the last oozings hours by hours," even as the day dies, light fades, and the night comes on apace. Yeats dreamed of being an artificial bird in a tree made of gold and silver. Keats knew better, as did Stevens. We are men, and the ground must claim us. I watch the sinking sun, this first day of summer, lie behind the eddying leaves of the river birch outside my study window and I see the shadows cast on the wall of the house next door, shadows like ripples of water. I am calm as the shadows advance and the illumined part fades, and now, save one exiguous strip, not much bigger than my hand, is gone.

If I may ask, how did you first become interested in poetry? I am a late-comer to poetry. My first interest in the arts is, and has been throughout a very full life, music. The arts, of course, overlap, intersect, bind together, and are inseparably linked.

Regarding this poem by Walter de la Mare, it is full of beauty and depth. I notice in a search for more about this poet, that he was also an author of some fine stores about the supernatural. His association of the wind with our lives, with nature and with the unknown brings to mind the countless references to the wind in Jewish and Christian scriptures. One of my favorites wind images is in the book of Isaiah, where the unseen wind causes the trees to 'clap their hands'

“You will go out in joy
and be led forth in peace;
the mountains and hills
will burst into song before you,
and all the trees of the field
will clap their hands"
Isaiah 55:12

Bruce: Thank you very much for your lovely meditation on "the great mystery of life," and for bringing together all of these wonderful poets -- they are all on the trail of the same thing, aren't they? As ever, you have shared a fine and apt poem by Dickinson. I agree with your pairing of her poem with "Nobody Knows": "we live under deep water," while at the same time we are "Homesick for steadfast Honey." I think we have to accept the former, and give up on the latter.

The acceptance of mystery and ineffability is not a bad thing. I think this is why I find the haiku poets so compelling. Haiku continually remind us that everything that is in front of us at this moment is all there is, is all we need. And I would hazard the thought that this is true of good poems in any language, at any time, and in any place. I think your lovely closing images of the river birch and the setting sun are of the same character, and exemplify what I am trying to get at. I cannot put myself in your shoes, but perhaps this accounts for the "calm" that appears in your final sentence. I feel there is an essential calmness at the heart of any moving poem or work of art.

Again, thank you very much for sharing your meditation.

Mr. Guirl: I'm pleased you like "Nobody Knows." De la Mare was a remarkable person. In addition to his poems and short stories (and novels as well), he was a marvelous anthologist. With respect to the latter, you may wish to have a look at (although you may already know of it), his "Behold, this Dreamer!", which is a collection of poems and prose about, yes, our dream life -- but not merely a collection: he links everything together with his wise ongoing commentary. I also recommend "Come Hither," his well-known poetry anthology, which is preceded by a lovely introduction about the wonder and power of poetry. As for "Nobody Knows," it appears in one of his collections of "children's verse." But, as you may have seen me note here in the past, de la Mare's "children's verse" is not just for children, as you perceive.

How did I first become interested in poetry? It started in my freshman and sophomore years of college, when I had two fine teachers for introductory English classes. I recall encountering "The Love Song of J. Alfred Prufrock," "The River Merchant's Wife: A Letter," and "Hay for the Horses" (the last by Gary Snyder). I knew I was onto something. I then took a course titled "Yeats, Pound, and Eliot," and I was hooked, even though I was supposed to be an Economics major. I stumbled into poetry, and it changed my life. But, as you say, these things "overlap, intersect, bind together, and are inseparably linked." It seems alien to say in these times, but the common thread is Beauty and Truth, whether we are speaking of poems or music or painting. Or so I believe.

Thank you very much for sharing the lovely passage from Isaiah, which is new to me. Ah, one could spend a great deal of one's life just reading poems about the wind. That sounds like a good idea . . .

I'm always happy to hear from you. Thank you very much for stopping by. Best wishes to you and your loved ones.