All Is Well With The World

This week I saw my first woolly bear caterpillars of the year: one on Monday afternoon and another this afternoon.  The traveler I encountered today was crossing a pathway frequented by walkers and bicyclists.  As with all woolly bears at this time of year, it was charmingly, touchingly intent upon its singular, solitary journey.
Fearing that it might be crushed by an inattentive passer-by, I stayed beside it as it made its way toward the meadow beyond the pathway. (This is something we all do if the occasion arises.  I am not seeking praise.)  I watched it disappear safely into the fallen leaves and the short grass beneath a maple tree, the grass now green again with the autumn rain.
Shinto
When sorrow lays us low
for a second we are saved
by humble windfalls
of mindfulness or memory:
the taste of a fruit, the taste of water,
that face given back to us by a dream,
the first jasmine of November,
the endless yearning of the compass,
a book we thought was lost,
the throb of a hexameter,
the slight key that opens a house to us,
the smell of a library, or of sandalwood,
the former name of a street,
the colors of a map,
an unforeseen etymology,
the smoothness of a filed fingernail,
the date we were looking for,
the twelve dark bell-strokes, tolling as we count,
a sudden physical pain.
Eight million Shinto deities
travel secretly throughout the earth.
Those modest gods touch us --
touch us and move on.
Jorge Luis Borges (translated by Hoyt Rogers), in Jorge Luis Borges, Selected Poems (edited by Alexander Coleman) (Viking 1999). 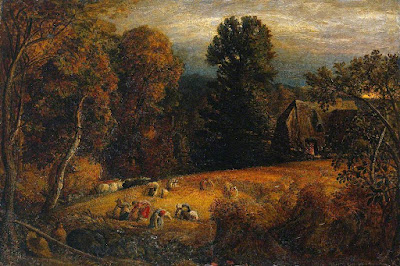 This one may be shorter than usual, but it's one of my favorites of yours. Just lovely.

Hi Stephen,
If by 'we all' you mean all those you care about all living things then I would agree (I just re-located a froghopper from the front room to the sage bush outside) - but I suspect that might be the minority.A good many folk would either pass by or squish it underfoot...
What a beautiful poem by Borges - thanks! It reminds me of the below that I have loved for years - the consolation given by the world.

The Woodspurge
BY DANTE GABRIEL ROSSETTI

Between my knees my forehead was,—
My lips, drawn in, said not Alas!
My hair was over in the grass,
My naked ears heard the day pass.

My eyes, wide open, had the run
Of some ten weeds to fix upon;
Among those few, out of the sun,
The woodspurge flower'd, three cups in one.

From perfect grief there need not be
Wisdom or even memory:
One thing then learnt remains to me,—
The woodspurge has a cup of three.

Lovely poem, but "throb of a hexameter"?? Maybe rhythm would have been a better translation... But then who knows, maybe the original did warrant "throb".

Bex: Thank you very much for the kind words. It's nice to hear from you again. I'm happy to know that you are still visiting. I hope that all is well. Thank you again.

Maggie Emm: Thank you for sharing those thoughts.

I'm pleased you like "Shinto." It always reminds me of the sacred trees one sees in Japan, which (among other places) are the dwellings of the "modest gods" referred to by Borges.

"Froghopper": I had never heard that name. But now, having looked around the internet, I find that I have seen them before. They have their own charm (and are amazing jumpers, I learned). All of these small worlds around us.

Thank you for sharing "The Woodspurge." It's a favorite of mine as well. I suspect that many of us have had the type of experience that Rossetti had. It fits perfectly here.

Deb: I'm pleased you like the poem. As for "throb": the Selected Poems includes Borges' Spanish text on the page facing the translation, and the line in Spanish is: "el pulso de un hexametro." As one might expect, "pulso" means "pulse" (according to my Oxford Spanish-English Dictionary). Thus, I can see how the translator chose to use "throb." (Although, not knowing Spanish, I defer to those who know the language.)

It’s good to see the Samuel Palmer painting. Before retirement, I had a reproduction of it on my campus office wall. It was news from the real world, like Bruegel’s Fall of the Rebel Angels and the Tower of Babel painting. These helped.

Thank you for this beautiful respite in my day.

Do the chickens learn from the caterpillars about the reasons for crossing roads? Hmm …

Mr. Nelson: "The Gleaning Field" is indeed wonderful, isn't it? As you know, harvest time was the subject of many of Palmer's paintings, but I find "The Gleaning Field" to be the most beautiful and the most evocative of them (although they are all lovely): something about the richness and the depth of the color and the light (with that marvelous setting sun). As you say: "news from the real world." It's interesting that you mention it in the company of Bruegel's two paintings (as also being "news from the real world"). Alas, too true, as a look around us today bears out. But we always have the world of Palmer.

There was a lovely book about Palmer's work published in 2015: Samuel Palmer: Shadows on the Wall by William Vaughan (Yale University Press). It has a fine reproduction of "The Gleaning Field," which I looked at after receiving your comment. In doing so, I noticed that Vaughan makes the following remark about the painting: "It is a rich, timeless image, perhaps more suggestive of Bruegel than of Blake. There is even a hint of divine providence. For peeping above the trees in the middle ground is the tip of a church spire." (Page 201.)

It's good to hear from you again. Thank you very much for stopping by.

nikki: I'm pleased you liked the post. Thank you for your kind words. And, as always, thank you for visiting.

RT: I can't speak for the chickens and the caterpillars, but I suspect that, when it comes to crossing roads, they may be much like us: searching for a place where "peace comes dropping slow" (to quote from a poem which recently appeared in one of your blog posts). It's nice to hear from you. Thank you very much for visiting.

Stephen & all, Vaughan's Samuel Palmer: Shadows on the Wall is a indeed fine source for color reproductions of Samuel Palmer's work and, I believe, for a reliable account of his life. As a first book to read about Palmer, though, Geoffrey Grigson's Samuel Palmer: The Visionary Years may be recommended, or one could read the half-book on Palmer in David Cecil's Visionary and Dreamer. (Palmer is the "visionary," Edward Burne-Jones the "dreamer"). By the way, Cecil's book is dedicated to Ruth Pitter, whose poetry will speak to people who love Palmer's most characteristic art. (I was disappointed by Rachel Campbell-Johnston's attractively titled Mysterious Wisdom: The Life and Work of Samuel Palmer.)

Mr. Nelson: Thank you for sharing those recommendations. I was aware of Grigson's book (although I haven't read it), but not of Cecil's. It would be interesting to read Grigson on Palmer: as you know, Grigson could be quite harsh in his assessments of people, so I wonder what he made of Palmer. I suspect he was gentler with Palmer than he was with many modern poets. Thank you again.