I'm spending this week in the high desert to the east of the Cascades, in the town of Bend, Oregon.  A wide and open World of plains, buttes, and peaks, of Ponderosa pines, sagebrush, tufts of wild grass, and junipers.  A mostly quiet World.  Of course, the other world is continually going about its business, and it lurks here in this computer, and over there across the room in an iPhone.
In the mornings and evenings, I travel to Japan to visit Kenkō and Ryōkan.  A quiet World as well.
"When people meet they are never silent a moment.  There is always talk about something.  If you listen to their conversations, most of what they say is meaningless chatter.  Their gossip about society and their criticisms of other people cause much harm and little profit, either for themselves or others.  When people are gabbling over these things, they never seem to realize that it does neither party any good."
Kenkō (1283-1350) (translated by Donald Keene), Tsurezuregusa, Chapter 164, in Donald Keene (editor and translator), Essays in Idleness: The Tsurezuregusa of Kenkō (Columbia University Press 1967), page 143.
During the last three decades of his life Ryōkan lived in a small hut in the hills near the Sea of Japan.  He was a kind and sociable man, but he was alone most of the time.
Twilight — the only conversation
on this hill
Is the wind blowing through the pines.
Ryōkan (1758-1831) (translated by John Stevens), in John Stevens (editor and translator), One Robe, One Bowl: The Zen Poetry of Ryōkan (Weatherhill 1977), page 76. 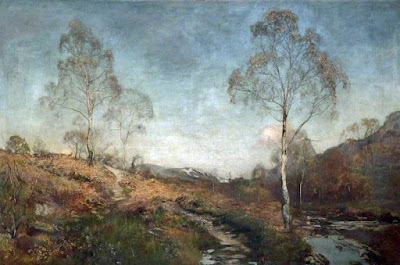 David Murray (1849-1933), "Landscape" (1885)
One tries to keep the noisy world at arm's length and at bay, but the sheer volume of words is unstoppable and insidious, and always will be.  Being weak-willed, I am often undone by the briefest of forays into the electronic world: words, words, and ever more words (including the words I am writing at this moment).  One comes to value reticence.
"I wonder what feelings inspire a man to complain of 'having nothing to do.'  I am happiest when I have nothing to distract me and I am completely alone. . . . Even if a man has not yet discovered the path of enlightenment, as long as he removes himself from his worldly ties, leads a quiet life, and maintains his peace of mind by avoiding entanglements, he may be said to be happy, at least for the time being."
Kenkō (translated by Donald Keene), Tsurezuregusa, Chapter 75, in Donald Keene, Essays in Idleness: The Tsurezuregusa of Kenkō, pages 66-67.
Ryōkan found his path of enlightenment in the hills, but it was never an easy one, and he never claimed that it was the only path.
My hut lies in the middle of a dense forest;
Every year the green ivy grows longer.
No news of the affairs of men,
Only the occasional song of a woodcutter.
The sun shines and I mend my robe;
When the moon comes out I read Buddhist poems.
I have nothing to report, my friends.
If you want to find the meaning, stop chasing after so many things.
Ryōkan (translated by John Stevens), in John Stevens, One Robe, One Bowl: The Zen Poetry of Ryōkan, page 43. 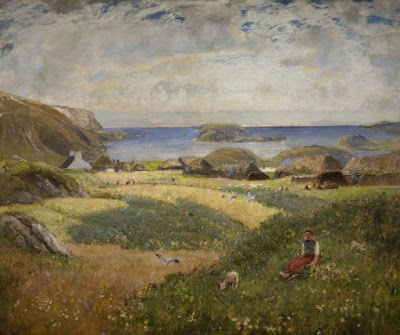 It is soothing merely to consider our human ties to these men and their experience -- and their wisdom.

I envy you your retreat. I loved Bend the few times I was in that area. This month post-travel for me seems awfully busy, and I am beginning to understand how good traveling is for the soul, the way I do it at least, in the way that it reduces the obligations and responsibilities, even the conversations and entanglements that we must have in our everyday life. The focus is narrowed, and concentrated, and one can put everything not strictly necessary aside on a list named "When I Get Home."

But forgive me! I should not even be talking about that to you. Stay away and enjoy!

I wanted to ask, where do you find all the wonderful paintings?

GretchenJoanna: Thank you for those thoughts. From reading your posts (and seeing your photographs) on Gladsome Lights, you seem to have cultivated a wonderful way of traveling that combines time with family and friends with lovely places. In writing the post, I worried that perhaps the passages and poems from Kenkō and Ryōkan (and my framing text) might seem a bit misanthropic, and have an air of solitariness about them, which might misrepresent the humanity of those two wise men. So your thoughts provide a good balance. (As for Bend, it is indeed a lovely place.)

Shanti: Thank you very much for your kind words. As I have said here before, I am merely a messenger for the poets and the painters, who deserve all the credit for what appears here. As for the paintings, most of them can be found at Art UK, a wonderful site which is "the online home for every public art collection in the UK."

I'm happy you found your way here. Thank you again.

The word "reticence" does not appear in Marianne Moore's "Silence" (https://rpo.library.utoronto.ca/content/silence), but "restraint" is not far off.

I love the way you enter into Eastern poetry. Your own thoughts, your own journey - frame Ryokan and Kenko - so that this blog becomes an illuminating conversation between you and them, which allows me to splash about in your wake. It's beautiful, and rare, I think to find poetry, painting and philosophy effortlessly mixed in this way.

And I think you are touching lightly on wisdom itself. From a Buddhist perspective, wisdom cannot be 'taught'. It is not knowledge that can be intellectually acquired. Rather it arises from an experiential and contemplative relationship between myself and the 'contents' of this world. It is also a process rather than a state, and this too I find in your posts, thank you so very much.

Not to complain about my beloved homeland, but...if only the Japan of today were the quiet World of the poetry you mentioned. After reading your post, I walked out to the train station and had to put in earplugs to make it past the political rant being blasted through a speaker in the roundabout. While perhaps not quite loud enough to wake the dead, it must have at least reached the International Space Station. Perhaps you remember this phenomenon from your stays here. :)

George: That's a lovely poem (and new to me). Thank you for sharing it. "The deepest feeling always shows itself in silence; not in silence, but restraint." So her father "used to say." Moore being Moore, she creates puzzles and ambiguities for us, doesn't she? A browse around the internet discloses various interpretations of the poem. But I will leave it alone. Silence, restraint, reticence. All fine things, in my opinion.

As always, it's good to hear from you. Thank you very much for visiting again.

Ms. De Bernardi: Thank you very much for your kind words. However, I fear you are giving me much more credit than I deserve! In this case, Ryōkan, Kenkō, and David Murray are the bearers of wisdom. I have, fortunately, stumbled upon them, and have attempted to convey what they tell us. I would never claim to have any "wisdom" myself. But, as you suggest in your fine closing comments, we may be lucky enough to now and then find glimmers of it in our encounters with the world, and with the people in it, such as these three. I completely agree that this is "a process rather than a state."

Esther: Yes, I remember well the vans/trucks blaring political messages over loudspeakers. (I didn't know enough Japanese to understand the messages.) I also remember, more fondly, the "yaki-imo" trucks with their loudspeakers, selling sweet potatoes. (I mentioned Nogawa Kōen in a reply to one of your prior comments; I would sometimes see and hear a yaki-imo truck when I went for walks or runs in that area.) I appreciate it when you gently remind me of my tendency to romanticize Japan! I do tend to live in the vanished worlds of Bashō, Ryōkan, Saigyō, and the other poets.

As ever, thank you very much for visiting. Take care.