Should anyone ever decide to compile an anthology of poems that take laundry as their subject, they may wish to consider the following two poems.  First, from Andrew Young:

The smear of blue peat smoke
That staggered on the wind and broke,
The only sign of life,
Where was the shepherd's wife,
Who left those flapping clothes to dry,
Taking no thought for her family?
For, as they bellied out
And limbs took shape and waved about,
I thought, She little knows
That ghosts are trying on her children's clothes. 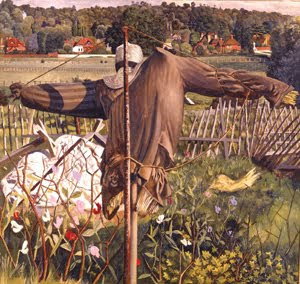 And, from Edward Thomas, a few lines from "Up in the Wind":

But no one's moved the wood from off the hill
There at the back, although it makes a noise
When the wind blows, as if a train were running
The other side, a train that never stops
Or ends.  And the linen crackles on the line
Like a wood fire rising.

Thomas wrote "Up in the Wind" in December of 1914.  One of his field notebooks contains this entry for November 27, 1914:  "Clothes on the line violently blowing in wind crackle like a rising woodfire." 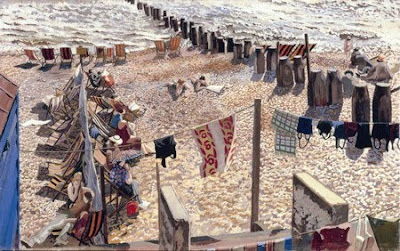 I particularly like the example from Andrew Young. The best laundry poem that I've read is James Merrill's 'The Mad Scene', beginning with a wonderful line: 'Again last night I dreamed the dream called Laundry.' Read the whole thing here: http://www.poetryfoundation.org/archive/poem.html?id=18419

Professor Kendall: Thank you very much for visiting, and for leaving a comment. I was not aware of the poem by Merrill - thank you for the link.

And thank you indeed for your kind words about the blog. They mean a great deal to me, since I enjoy your writing - as you can see, I have an interest in many of the poets that interest you. I purchased "The Oxford Handbook of British and Irish War Poetry" a few years ago - I certainly never thought that its editor would comment here! I also enjoyed your review of recent Edward Thomas books ("The Ploughshare and the Stumbling Team") in the PN Review last year.

A lovely post. My grandmother never called it 'laundry'. It was always "do the wash", or it's "washing day".
My contribution to the proposed anthology are these four lines from the poem Royalty by Frederic Lawrence Knowles.

"In purple and fine linen
My country farmhouse shines,
The purple on the lilacs,
The linen on the lines."

Thank you very much for visiting, and for your comment, Lincoln Hunter.

Yes, it was "do the wash" as well when I was growing up in the Midwest. And thank you for the fine lines from "Royalty." I confess that I was not aware of Knowles -- I will have to take a look at his poetry.

Thank you, red dirt girl. My grandmother's washing line is a wonderful memory for me as well.