Hospital Poems, Part Five: "And If I Am Lucky, Find Some Link, Some Link"

I have previously suggested that Bernard Spencer (1909-1963) is a "neglected poet."  Thus, I am pleased to report that his poems have recently come back into print (Complete Poetry, Translations and Selected Prose, edited by Peter Robinson, Bloodaxe Books).  As I noted in my earlier post on Spencer, his poetry reminds me of that of Louis MacNeice (they were, in fact, acquaintances; they both died too young in September of 1963). Perhaps the resemblance has something to do with an urbanity of tone, together with a certain irony, with a bit of reserve thrown in.  (I suppose that this description fits a number of English poets of the Thirties, Forties, and Fifties.  A. S. J. Tessimond comes to mind, for instance.)

Spencer worked for the British Council in various European (usually Mediterranean) countries.  His poetry vividly reflects all of the locations in which he lived.  At one point, he contracted tuberculosis, and, as a result, spent some time in a hospital in Switzerland in 1948.  The following poem is about that hospital stay. 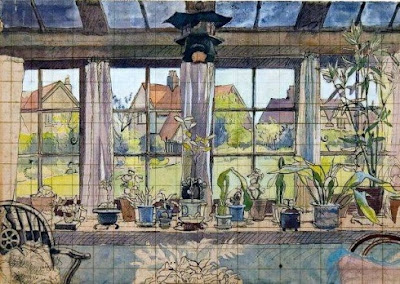 In a Foreign Hospital

Valleys away in the August dark the thunder
roots and tramples: lightning sharply prints
for an instant trees, hills, chimneys on the night.
We lie here in our similar rooms with the white
furniture, with our bit of Death inside us
(nearer than that Death our whole life lies under);
the man in the next room with the low voice,
the brown-skinned boy, the child among its toys
and I and others.  Against my bedside light
a small green insect flings itself with a noise
tiny and regular, a 'tink; tink, tink'.

A Nun stands rustling by, saying good night,
hooded and starched and smiling with her kind
lifeless, religious eyes.  'Is there anything
you want?' -- 'Sister, why yes, so many things:'
England is somewhere far away to my right
and all Your letter promised; days behind
my left hand or my head (or a whole age)
are dearer names and easier beds than here.
But since tonight must lack for all of these
I am free to keep my watch with images,
a bare white room, the World, an insect's rage,
and if I am lucky, find some link, some link.

The phrase "all Your letter promised" in line 17 may refer to his first wife Nora, who died of tuberculosis-related heart failure in June of 1947.  His lovely poem "At Courmayeur" (which I have previously posted) is based upon their planned holiday in the Alps that was foreclosed by her death. 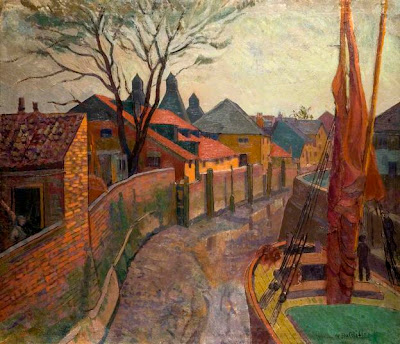 William Ratcliffe, "Regent's Canal at Hammersmith"
Posted by Stephen Pentz at 12:10 AM

" ... lightning sharply prints
for an instant trees, hills, chimneys on the night" and "I am free to keep my watch with images" - my favorite lines. Timeless.

Merisi: thank you for visiting again. I'm pleased that you like the poem. Yes, those are nice lines -- a sad poem, but still lovely.