"On Whom The Rain Comes Down"

We have been enjoying a nearly unprecedented (for this part of the world) three-month stretch of nearly rainless and mostly sunny weather.  (Strange to say, but some of us long-time residents begin to miss the rain if it is absent for too long.)  However, the grey curtain is about to come down.

The following poem by Thomas Hardy is apt in terms of what we have in store for us for the next five or six months.  Like "Autumn in King's Hintock Park" (which appeared in my previous post), the poem's mood and meaning are established through the use of a simple refrain. 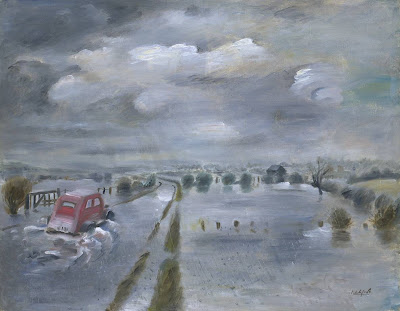 There trudges one to a merry-making
With a sturdy swing,
On whom the rain comes down.

To fetch the saving medicament
Is another bent,
On whom the rain comes down.

One slowly drives his herd to the stall
Ere ill befall,
On whom the rain comes down.

This bears his missives of life and death
With quickening breath,
On whom the rain comes down.

One watches for signals of wreck or war
From the hill afar,
On whom the rain comes down.

No care if he gain a shelter or none,
Unhired moves one,
On whom the rain comes down.

And another knows nought of its chilling fall
Upon him at all,
On whom the rain comes down.

A theme that appears often in Hardy's poetry is the timelessness of human life.  Each of us (I will hazard a guess) tends to think that we (as individuals) and the times that we live in are unique.  Hardy constantly reminds us that it has all been done before, and will all be done again.  "In Time of 'The Breaking of Nations'" is probably his best-known poem on this theme.

But Hardy does not do his reminding in a portentous or a judgmental manner.  He is very gentle about it.  Thus, there is nothing ominous or chiding in the repetition of "on whom the rain comes down."  It is soft, but relentless:  yes, of course, like the rain.

Not surprisingly, the poem concludes in a graveyard in the rain.  Hardy wrote scores of poems about graveyards in the rain.  This may strike some as being morbid, but it isn't.  After a while, coming across a Hardy poem in which the rain streams down a gravestone, obliterating the carved name and dates, is oddly comforting.  To wit:  Relax.  Rest assured.  It has all been done before and it will all be done again.  With or without you. 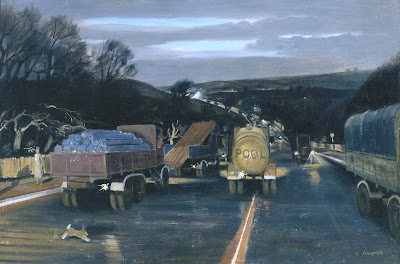 Here's another Hardy poem, often anthologized, about rain falling down the graven names on stained stones standing mutely in a cemetery. Yet they are full of meaning. Others will sing in the sun, hear ominous sounds in the night wind, when we are ashes, when we, as Wordsworth says, are "[r]olled round in earth's diurnal course, / With rocks, and stones, and trees."

During Wind And Rain by Thomas Hardy

They sing their dearest songs --
He, she, all of them -- yea,
Treble and tenor and bass,
And one to play;
With the candles mooning each face....
Ah, no; the years O!
How the sick leaves reel down in throngs!

They clear the creeping moss --
Elders and juniors -- aye,
Making the pathways neat
And the garden gay;
And they build a shady seat....
Ah, no; the years, the years;
See, the white storm-birds wing across!

They are blithely breakfasting all --
Men and maidens -- yea,
Under the summer tree,
With a glimpse of the bay,
While pet fowl come to the knee....
Ah, no; the years O!
And the rotten rose is ript from the wall.

They change to a high new house,
He, she, all of them -- aye,
Clocks and carpets and chairs
On the lawn all day,
And brightest things that are theirs....
Ah, no; the years, the years;
Down their carved names the rain-drop ploughs.

I have a fondness for 'Still Falls the Rain' by Edith Sitwell. On a dark, wet day like today remembering the ominous tones and extravagant clothing of the Sitwell recording makes me smile.

Mr. Floyd: thank you for "During Wind and Rain." It was one of the poems I had in mind in my final paragraph, and, in particular, of course, its final line.

alice c: thank you for stopping by, and for your thoughts. I'm not familiar with Sitwell's poem -- I'll track it down.

Hello again Mr Pentz. Thank you for 'On Whom The Rain Comes Down', which I didn't know. I like the sense of his vision embracing all (OK, many) sides of the human condition and the poem's powerful economy. Thank you for the continuing excellence of your blog. Enjoy the rain when it comes. Here in England, since the drought of Spring, we have had a glorious sufficiency of rain and even, for some poor souls, an unpleasant excess.

Mr. Trotman: thank you very much for your thoughts, and for your kind words.

"Powerful economy" is a fine way of describing what Hardy does in the poem. It all seems very simple -- almost like a sort of nursery rhyme -- but, as you say, it does embrace the whole of life.