One of the great charms of Thomas Hardy's poetry is the large number of human characters who populate his poems.  This may reflect Hardy's years as a novelist.  He was clearly a man who possessed deep powers of observation and understanding.  But, most importantly, Hardy's empathy is profound.  He does not condescend or patronize.

I think that this is a characteristic that he shares with Philip Larkin. Perhaps this is one of the things that attracted Larkin to Hardy's poetry. Yes, both of them can be acerbic and gloomy about human beings and about the human condition.  But beneath it all one senses a tremendous empathy:  We are all in this together. 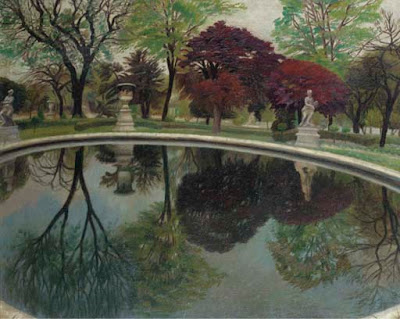 Hardy sometimes employs technical devices in his poems that may, at first impression, seem creaky and/or quaint.  The refrain "raking up leaves" might initially strike one as falling into this category.  But, as I say: "at first impression."  In fact, the refrain is perfect, bringing together both the outer and inner action of the poem and its individual and universal meaning.

Hardy wrote the poem in the autumn of 1906.  In a letter dated December 21, 1906, Hardy stated:  "I happened to be walking, or cycling, through [the park] years ago, when the incident occurred on which the verses are based, & I wrote them out."  J. O. Bailey, The Poetry of Thomas Hardy: A Handbook and Commentary (University of North Carolina Press 1970), page 207.

"Those memory weaves/Into grey ghosts by me" is very fine, I think.  As is:  "Will not, when missed am I." 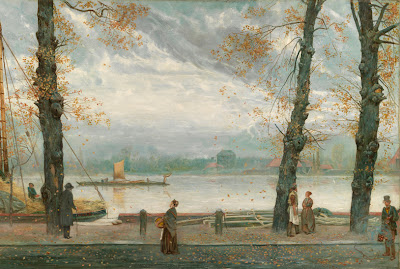 Just a few days ago I stood on a busy side street in San Francisco, and while I should of been shopping like any tourist with sense, I was looking up watching the sycamore leaves blowing in front of a row of white victorian houses. Much like the woman in the painting you have used to illustrate this thoughtful poem by Hardy. Its remarkable how cleary we can see the 'raker' whose outlook has greatly cheered me~

Julie: thank you for those thoughts. You have articulated better than I did what I was trying to get at when I spoke of Hardy's empathy. He can write a line such as "I, an old woman now" and, as I suggested, it doesn't sound condescending or patronizing. In fact, it is just the opposite: the poem makes us feel that we share the same world as the woman. This is very hard to accomplish, I think.

I hope that you enjoyed your trip to San Francisco. As always, it is good to hear from you.