Two Dead Knights: "The Mournful Word The Seas Say When Tides Are Wandering Out Or In"

My previous post on John Masefield got me to thinking about another poem by him.  The poem may seem anachronistic to some.  After all, who writes (or reads) poems about knights any more?  In fact, the poem may have been viewed as anachronistic even in 1902, when it was originally published.

Ah, but I consider most anachronisms to be virtues, not vices. 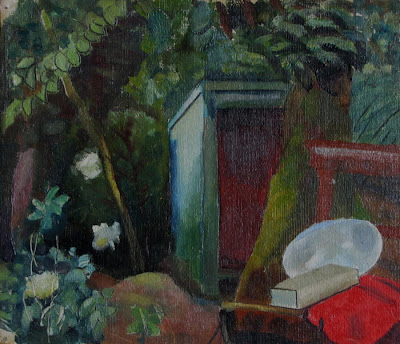 The cleanly rush of the mountain air,
And the mumbling, grumbling humble-bees,
Are the only things that wander there.
The pitiful bones are laid at ease,
The grass has grown in his tangled hair,
And a rambling bramble binds his knees.

To shrieve his soul from the pangs of hell,
The only requiem-bells that rang
Were the hare-bell and the heather-bell.
Hushed he is with the holy spell
In the gentle hymn the wind sang,
And he lies quiet, and sleeps well.

He is bleached and blanched with the summer sun;
The misty rain and the cold dew
Have altered him from the kingly one
(That his lady loved, and his men knew)
And dwindled him to a skeleton.

The vetches have twined about his bones,
The straggling ivy twists and creeps
In his eye-sockets; the nettle keeps
Vigil about him while he sleeps.
Over his body the wind moans
With a dreary tune throughout the day,
In a chorus wistful, eerie, thin
As the gull's cry -- as the cry in the bay,
The mournful word the seas say
When tides are wandering out or in.

I think that these are particularly nice:  "The only requiem-bells that rang/Were the hare-bell and the heather-bell;" "In the gentle hymn the wind sang;" "And he lies quiet, and sleeps well;" "The vetches have twined about his bones;" "The mournful word the seas say/When tides are wandering out or in." 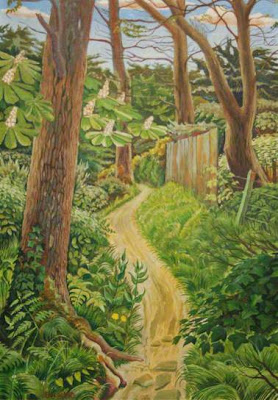 But Masefield was not the only person writing poetry about knights (or the skeletons of knights) at the beginning of the 20th century.

Chattering finch and water-fly
Are not merrier than I;
Here among the flowers I lie
Laughing everlastingly.
No:  I may not tell the best;
Surely, friends, I might have guessed
Death was but the good King's jest,
It was hid so carefully.

For another lovely poem about a knight, I recommend John Leicester Warren's "The Knight in the Wood," which I have posted here previously. Hello Stephen - I suggest that John Masefield's poem is based on an ancient Border Ballad (English-Scottish border country) called The Twa Corbies (Two Ravens). Arthur Rackham illustrated it. I liked the picture of Wharfedale, where I live - in the beautiful Yorkshire Dales.
Audrey Hargreaves

Ms Hargreaves: thank you very much for "The Twa Corbies"! You are right on the mark, I'd say. For instance, the final two lines are perfect: "O'er his white banes, when they are bare,/The wind sall blaw for evermair." (This is from the "Scottish version" printed in Arthur Quiller-Couch's Oxford Book of English Verse.)

I greatly appreciate your pointing this out. Thank you very much for visiting.

Needless to say, at least one daily visitor to your site appreciates a dose of medievalism in modern poetry. I'm delighted to have discovered these poems through you.

Jeff: I'm pleased that you like the poems. Since you are one who appreciates the revenants of the Middle Ages in the modern world -- e.g., gargoyles and Medieval architecture in America -- I'm happy to have you discover the poems.

Thank you very much for stopping by. I always appreciate hearing from you.