I once visited a Buddhist wat (temple) in southern Thailand.  A peanut-shaped concrete island -- about 30 feet long, 10 feet wide, and 2 feet tall -- had been built in the courtyard of the temple.  A carp pond had been hollowed out in the center of the island.  Soil had been brought in to create a border, and small flowering trees had been planted beside the pond.  One could sit on the concrete edge of the island and enjoy the (relatively) cool shade.

Hanging by strings from the branches of the trees were rectangular, blue plastic placards, swaying in the breeze.  Buddhist homilies had been painted in gilt lettering on the placards:  Thai on one side, English on the other.  Two of the homilies struck me at the time, so I wrote them down on a piece of paper, in case they might come in handy.  "A wise man always tames his restless mind."  "A well-guarded mind brings about happiness."

I am not a practitioner of Buddhism.  However, for many years I have been drawn to it as a philosophy.  It keeps returning to me, often through Chinese and Japanese poetry.  It sees things as they are, in a common-sense, down-to-earth fashion.  We do need to tame our restless mind.  A well-guarded mind, although it may not bring about happiness, may bring about a measure of serenity.

Hence:  if you should ever come upon unexpected messages swaying in the wind amongst flowering tree branches, take heed! 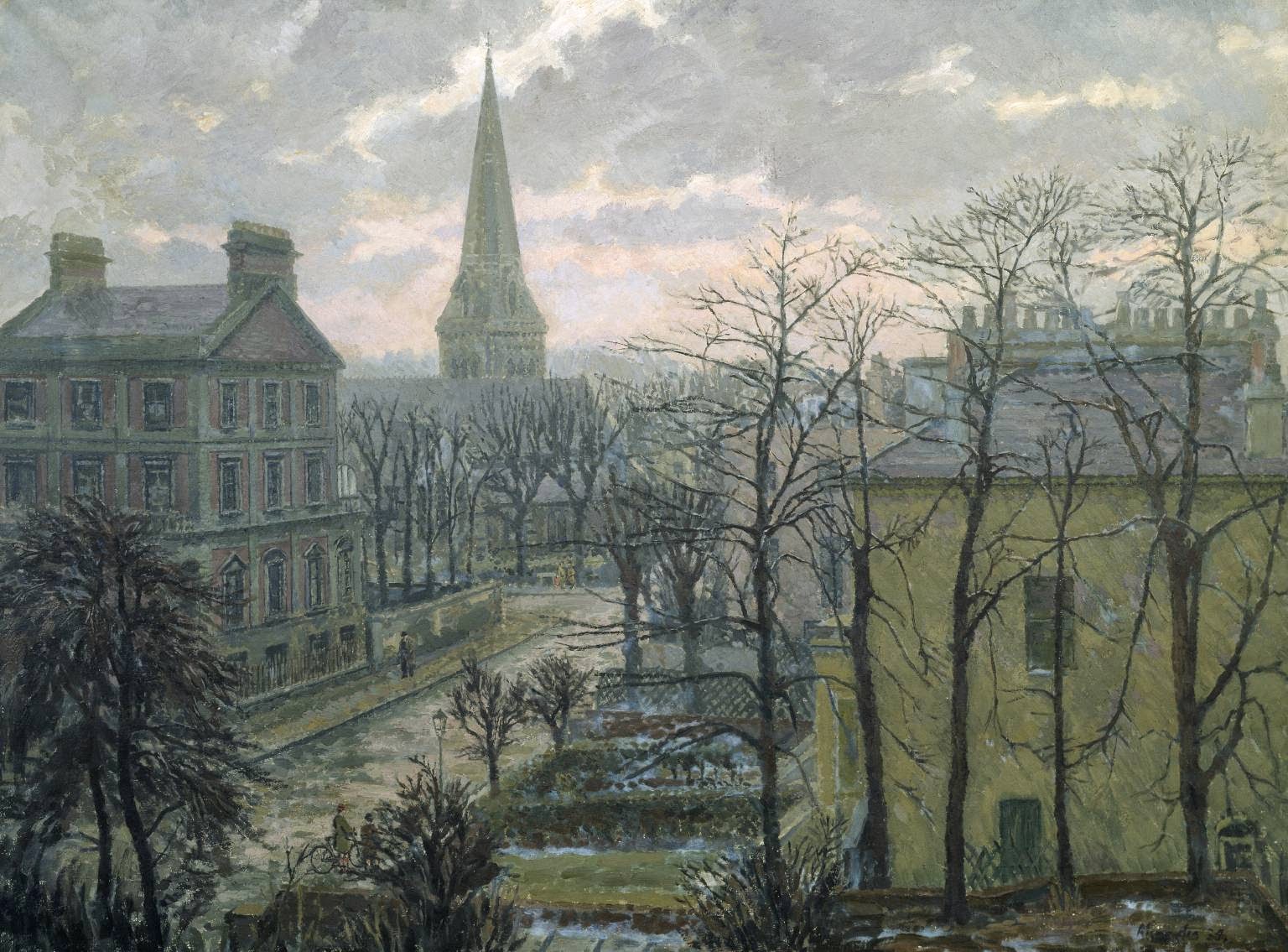 One can arrive at these timeless and placeless truths from any number of directions.

What needest thou? -- a few brief hours of rest
Wherein to seek thyself in thine own breast;
A transient silence wherein truth could say
Such was thy constant hope, and this thy way? --
O burden of life that is
A livelong tangle of perplexities!

What seekest thou? -- a truce from that thou art;
Some steadfast refuge from a fickle heart;
Still to be thou, and yet no thing of scorn,
To find no stay here, and yet not forlorn? --
O riddle of life that is
An endless war 'twixt contrarieties.

Leave this vain questioning.  Is not sweet the rose?
Sings not the wild bird ere to rest he goes?
Hath not in miracle brave June returned?
Burns not her beauty as of old it burned?
O foolish one to roam
So far in thine own mind away from home!

Where blooms the flower when her petals fade,
Where sleepeth echo by earth's music made,
Where all things transient to the changeless win,
There waits the peace thy spirit dwelleth in.

In some parts of the world more words are needed than in others.  For instance, might not the essence of de la Mare's poem be boiled down to this?

The quietness;
A chestnut leaf sinks
Through the clear water.

A clear waterfall;
Into the ripples
Fall green pine-needles. 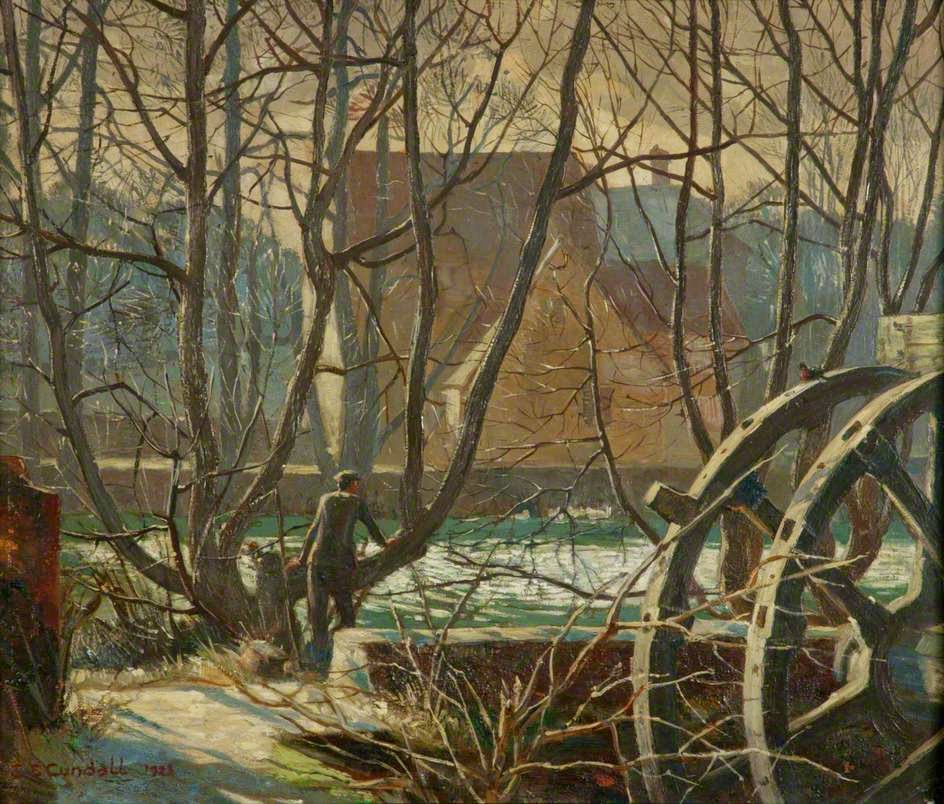 Returning to the other side of the world, we find a similar brevity and wisdom.

It is all one and the same, isn't it?  Location is mere happenstance. Centuries are of no moment. 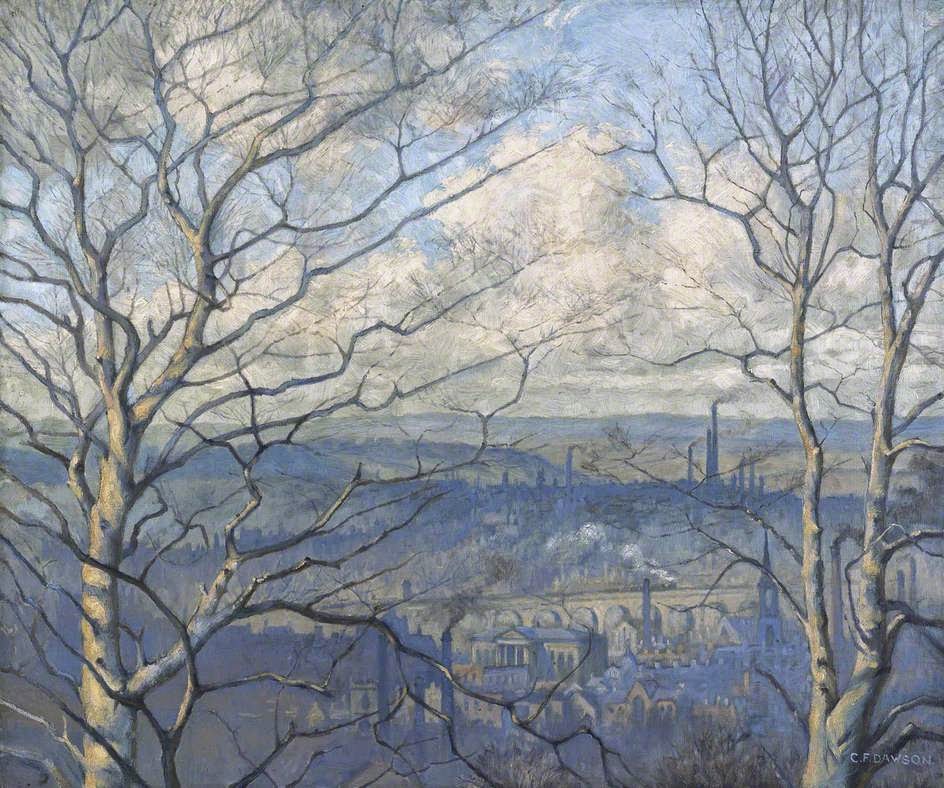 Charles Frederick Dawson, "Accrington from My Window" (1932)
Posted by Stephen Pentz at 1:15 AM

The "tamed" or "well guarded" mind appears very often in Buddhist canonical literature, and is frequently found in the very short epigrammatic discourses. This seems to me to suggest that it somehow encapsulates a lot of the other material in a useful way.

"Wonderful, indeed, it is to subdue the mind, so difficult to subdue, ever swift, and seizing whatever it desires. A tamed mind brings happiness."

"Let the discerning man guard the mind, so difficult to detect and extremely subtle, seizing whatever it desires. A guarded mind brings happiness."

Your quotes seem to come from the Cittavagga ("Mind section") of the Dhammapada.

Sam Vega: thank you very much for providing that background, and those further statements. I see the similarities, and the sources.

I had once thought of "Googling" what I had seen on the signs, but I thought better of it: I decided it was better to leave them as I found them. Which is not to say that I don't appreciate you now providing this background information -- it tells me I did stumble upon the real thing!

As ever, It is good to hear from you. Thanks again.

The last painting reminds me of my youth. Growing up in Lancashire in the fifties, the landscape had many mill chimneys which had a beauty all of their own.

acornmoon: thank you for that memory! It is a lovely painting isn't it? I have now done some Internet research and discovered that Accrington is in Lancashire. I also learned that "Accrington is famed for manufacturing the hardest and densest building bricks in the world" -- not to mention Accrington Stanley F. C.!

It's good to hear from you again. As always, thanks for stopping by.

Hah! The poetry of the Saturday late afternoon football results being read out (really!), ticker-tape fashion, on the TV ... and Accrington Stanley was among the many I remember fondly!! The 'ordinary' poetry of our lives, as the BBC's shipping news too ... (Forties, Cromarty, Forth, Tyne, Dogger, Fisher, German Bight ...)

The Dawson is a fine painting. Thank you!

Eamonn: thank you for that association, which is new to me. I like the comparison with the shipping news as well -- something which I have always thought is lovely, even though I did not grow up with it.

I completely agree with you about Dawson's painting -- wonderful.

It is always good to hear from you. Thank you very much for visiting again. I hope that all is well.