Here we are "in the bleak mid-winter."  I realize that, by the calendar, winter began just a week ago.  But, as a matter of emotion, it feels as though winter begins sometime in mid- to late-November, when the wind whirrs through the empty trees.  Or so it seems to me.

But things are not all that bleak.  The sun has passed through its lowest arc.  The longest night is behind us.  Things are afoot in the heavens. Dorothy Wordsworth wrote this in another season, but it seems apt now: "The crooked arm of the old oak tree points upwards to the moon."  Dorothy Wordsworth, journal entry for March 24, 1798, The Grasmere and Alfoxden Journals (edited by Pamela Woof) (Oxford University Press 2002), page 150.

"Skating on the K.s' pond last night after eating too much ham.  Eight-thirty.  Many stars.  No moon.  Orion's sword and girdle brilliant and all the other constellations whose names I have forgotten or never knew.  I am reminded of my youth and its skating ponds, of the ardor for strength, courage, and purpose excited in me then by the starlight.  It is nearly the same.  My feelings may be less ardent, the stars seem to burn more tenderly these days, but my openmouthed delight in finding them hung above the dark ice is no less." 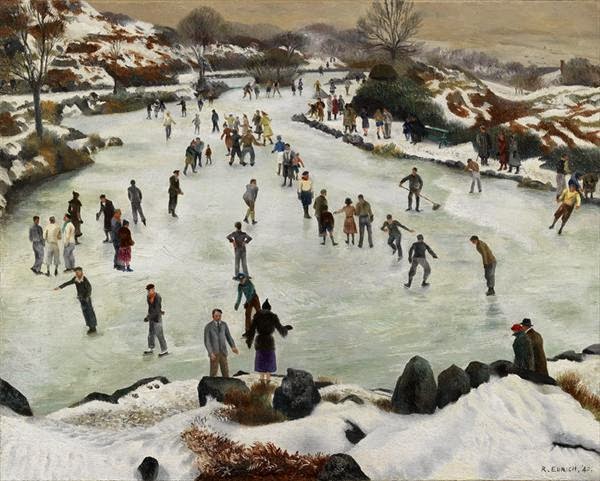 Although I was never much of a skater during my childhood in Minnesota, I can still recall the lakes being turned into skating rinks in the winter.  My fondest memories are of those lakes at night:  a black expanse overhead; the sound of the slicing skates.  (There is another thread in the pattern as well:  my maternal grandparents first met while skating on Lake of the Isles in Minneapolis.)

So through the darkness and the cold we flew,
And not a voice was idle; with the din,
Meanwhile, the precipices rang aloud,
The leafless trees, and every icy crag
Tinkled like iron, while the distant hills
Into the tumult sent an alien sound
Of melancholy, not unnoticed, while the stars,
Eastward, were sparkling clear, and in the west
The orange sky of evening died away.

Not seldom from the uproar I retired
Into a silent bay, or sportively
Glanced sideway, leaving the tumultuous throng,
To cut across the image of a star
That gleam'd upon the ice:  and oftentimes
When we had given our bodies to the wind,
And all the shadowy banks, on either side,
Came sweeping through the darkness, spinning still
The rapid line of motion; then at once
Have I, reclining back upon my heels,
Stopp'd short, yet still the solitary Cliffs
Wheeled by me, even as if the earth had roll'd
With visible motion her diurnal round;
Behind me did they stretch in solemn train
Feebler and feebler, and I stood and watch'd
Till all was tranquil as a dreamless sleep.

"As if the earth had roll'd/With visible motion her diurnal round" brings to mind "roll'd round in earth's diurnal course" from "A slumber did my spirit seal," which was written in the same year as the passage quoted above. 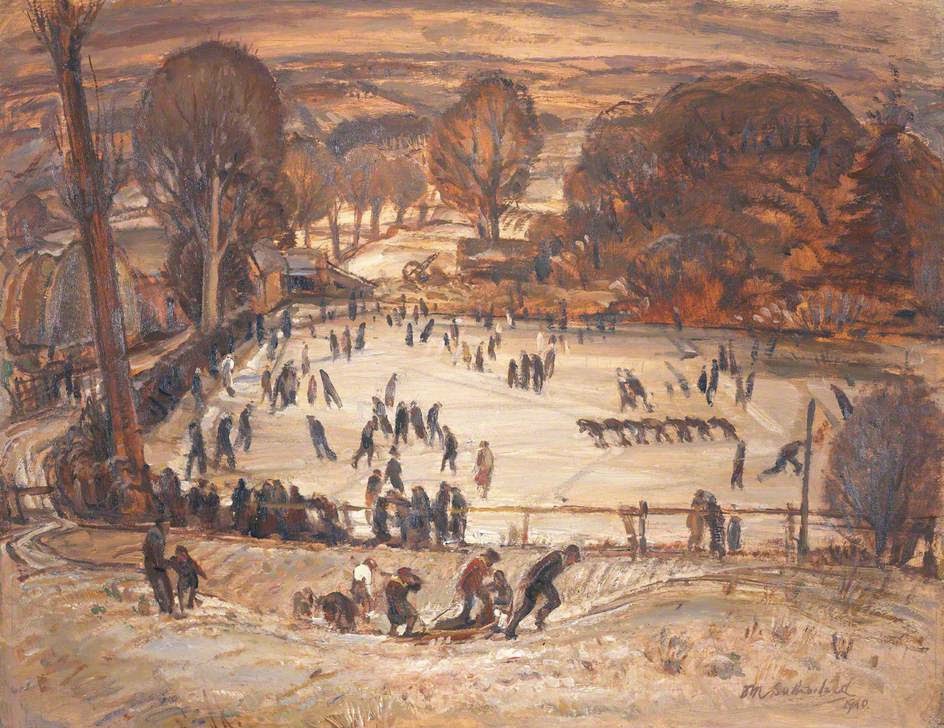 A dome of darkness overhead.  Dark depths below.  Between the two, skaters curving on a sheet of ice.  The poetic possibilities are obvious. (More so than, say, ice-fishing.  Although ice-fishing does have its charms.)

The hop-poles stand in cones,
The icy pond lurks under,
The pole-tops steeple to the thrones
Of stars, sound gulfs of wonder;
But not the tallest there, 'tis said,
Could fathom to this pond's black bed.

Then is not death at watch
Within those secret waters?
What wants he but to catch
Earth's heedless sons and daughters?
With but a crystal parapet
Between, he has his engines set.

Then on, blood shouts, on, on,
Twirl, wheel and whip above him,
Dance on this ball-floor thin and wan,
Use him as though you love him;
Court him, elude him, reel and pass,
And let him hate you through the glass. 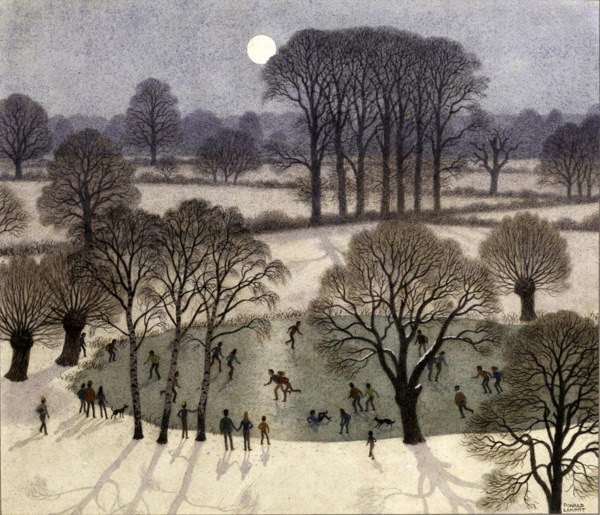 What a terrific way to begin the week: the famous skating sequence from the ‘Childhood’ section of The Prelude. Every time I read it something different seems to spring out of the lines of verse. This time I was struck how Edmund Burke’s writing on the ‘Sublime and Beautiful’ had such an effect on the Romantic poets. Here the stars, the crags, the cliffs and, especially, the motion of the earth confirm Burke’s notion of the beauty of the sublime and how it can be vast, gloomy, overwhelming, frightening and yet also delightful.

“When we had given our bodies to the wind,
And all the shadowy banks, on either side,
Came sweeping through the darkness, spinning still
The rapid line of motion; then at once
Have I, reclining back upon my heels,
Stopp'd short, yet still the solitary Cliffs
Wheeled by me, even as if the earth had roll'd
With visible motion her diurnal round;”

I like the way Wordsworth conveys the sense of the movement of skating by the enjambed or run on of lines and the alliteration of ’s’— “sweeping through the darkness, spinning still” and of course the use of the verb ‘Wheeled’ placed at the beginning of a line where one can’t but help placing great stress on it and thus convey the whirling movement of the earth.

Thank you for posting something by John Cheever. I was in Mr. Cheever's somewhat ill-fated fiction writing class at Boston University back in 1974. He left in the middle of the second semester in order, as he told us, "to dry out" at the Smithers Clinic in New York. He was replaced by John Updike, who was going through a divorce. And I seem to remember that was the year that Anne Sexton, who had been teaching poetry at the school, committed suicide. Not a great year for the private lives of great writers.

Mr Harrow: I agree: "Wonderful stuff" indeed. Your analysis of Wordsworth's craft in the passage is very helpful.

Thank you very much for bringing in the possible influence of Burke's book -- I had never made that connection before. I'm no Burke expert, nor am I a 17th century philosophy expert, but it seems to me that that book deserves more attention. Of course, it is understandably overshadowed by his political career, but it is a very interesting book. One can see why Burke could more than hold his own with Samuel Johnson.

As always, thank you very much for visiting, and for your thoughts. Happy New Year!

Mr Frieze: Thank you very much for sharing that anecdote: that was quite a class! You were very fortunate.

Long ago, I went through a period when I was immersed in Cheever. However, my fiction reading has now pretty much withered away. But, remembering this passage, and paging through his Journals again, I feel that I owe it to myself to return to him. His writing is beautiful.

Someone must mention the Edmund Blunden before the year is out. The last verse is outstanding.
Happy New Year -- & I will echo Fred & wish a Happy New Year to all the commenters here.
Susan

Susan: Happy New Year to you as well! It's very nice to hear from you at the turning of the year.

Thank you very much for drawing attention to the last line of Blunden's poem. It does go beautifully to the heart of what he is getting at, doesn't it? It is a line that we each understand more keenly with each passing year. But I imagine that Blunden, with his front-line experience in the First World War, felt it more keenly than most of us ever will.

Thank you very much for all of your visits and comments over the year (and in past years). I greatly appreciate and value your long-term presence here. Best wishes for a healthy and happy coming year.

A wonderful post which has lingered in my mind ever since I read it on a day of sharp frost on the edge of Dartmoor. You place these careful chosen morsels before us, enhanced by your careful choice of illustrations, and we can savour each separately and then in relation to each other - thank you!

May I wish you a happy new year full of felicitous reading discoveries.

alice c: I'm very happy to hear from you again. I greatly appreciate your kind words. Thank you very much. I'm pleased that you were able to enjoy the poems and images in such a lovely place.

Thank you for your long-term presence here. Best wishes to you in the coming year.